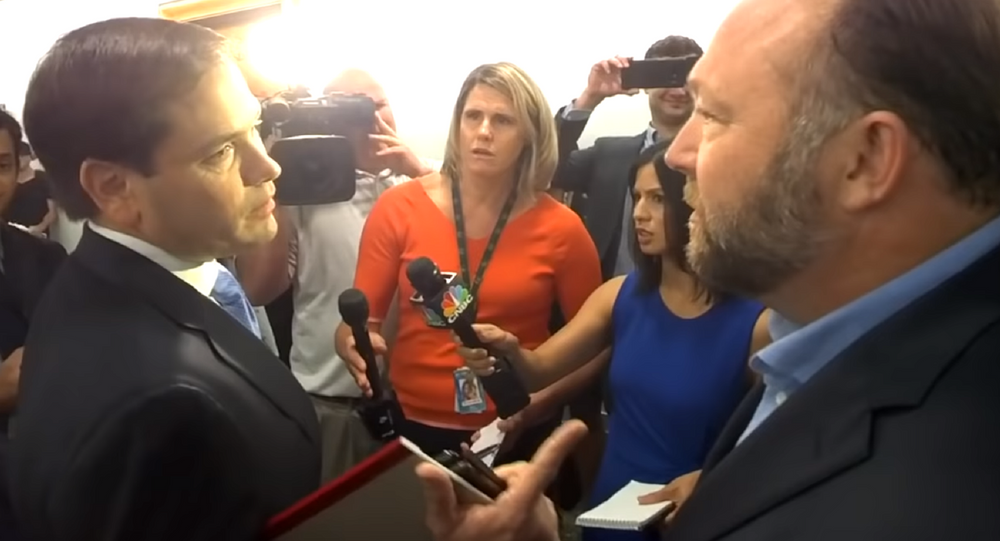 InfoWars boss Alex Jones got a stern warning from Florida Sen. Marco Rubio on Wednesday after the controversial radio host heckled and repeatedly patted the 47-year-old politician on the shoulder during a brief encounter in the Capitol Building.

The pair traded barbs as Rubio was fielding questions from reporters outside of the Senate Intelligence Committee hearing in which executives from both Twitter and Facebook testified about foreign influences on their respective platforms.

For nearly five minutes, Rubio took questions from reporters as Jones interrupted and complained to him about how tech companies are "purging conservatives and shadow banning people en masse."

Although Rubio indicates in the video that he doesn't know who Jones is, the radio personality continues to plead his case, stressing that companies are targeting conservative outlets. "What about the Democrats purging conservatives? He's not answering. Republicans are acting like it isn't happening. Thank God Trump is," Jones said.

And that's when things started popping off, folks. Whether Rubio was just getting fed up with the 44-year-old Texan's rant or if it was the mention of US President Donald Trump, Rubio hit back by calling Jones a "heckler."

"Who is this clown? A heckler at a press gaggle?" Rubio said. "I don't know who you are, man. I don't know your website."

Jones retaliated in a classic schoolkid manner by engaging in a bit of name calling, saying Rubio was acting "dumb" and that he was a "snake" and a "frat boy."

But then, Jones committed the heinous act of patting Rubio on the shoulder, sending the politician into a full blown Clint Eastwood-esque standoff. "Hey, don't touch me again, man. I'm asking you not to touch me again," Rubio said after members of his security detail told Jones not to lay hands on the lawmaker. Jones asks if Rubio's threatening to have security drag him out.

​The war of words continued on with Jones telling reporters that Rubio was a "little gangster thug" who just "threatened to beat me up." Although Rubio suggested his words were being twisted, he later told reporters to "talk to this clown [Jones]" after responding to a final question from the group.

Wanting to have the last word, Jones told Rubio to "go back to your bathhouse."

"There goes Rubio, that little punk," he added.

​​Jones' interaction with Rubio comes during an intense week on Capitol Hill, where dozens of people were arrested on Tuesday for protesting the Senate confirmation hearings for Supreme Court nominee Brett Kavanaugh.