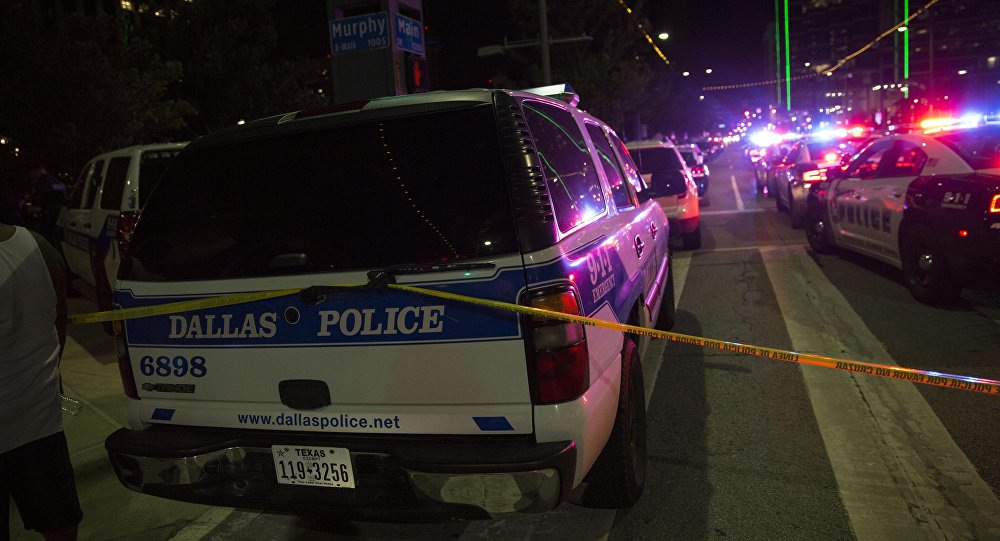 WASHINGTON (Sputnik) – The incident comes just one week after the US Federal Bureau of Investigation (FBI) said it arrested a 68-year-old man in the US state of California for making threats against employees of the Boston Globe newspaper.

A man was arrested after crashing his pickup truck into the building of the local TV station FOX 4 News in Dallas, Texas during a live newscast, employees at the media outlet said on Wednesday.

"A man crashed a truck into the side of our building this morning. He jumped out and started ranting. He’s in custody now but the bomb squad is on its way," Fox 4 News staff said in a Facebook post.

During the incident, the man repeatedly rammed his truck into the side of the downtown office building, which has floor to ceiling windows, FOX4 staff said.

Fox 4 the man who crashed his pickup truck into their TV studio in downtown Dallas "jumped out and started ranting". pic.twitter.com/nhoB8NLXtq

© AP Photo / Ng Han Guan
WATCH: Dozens of People Lie on Road After Deadly Van Ramming in China (GRAPHIC)
The local TV station added that the man placed numerous boxes filled with stacks of paper next to a side door and left a suspicious bag at the scene. A police bomb squad was dispatched to examine the bag.

Dallas police have not yet revealed the possible motive for the incident, or whether the man in custody had any prior connections to the TV station.

Earlier, the US Federal Bureau of Investigation (FBI) arrested a 68-year-old man in the US state of California after he threatened employees of the Boston Globe newspaper.

Terror Suspect in Westminster Car Crash 'Not Cooperating' With Police