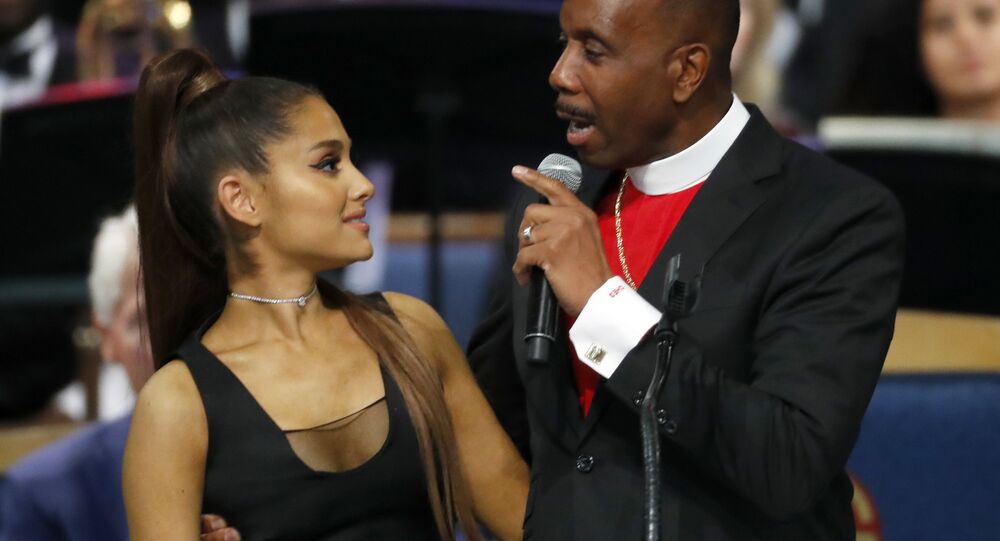 Pastor Charles Ellis’ “friendly” and excessively “familiar” gesture seems to have overshadowed the revealing bouffant minidress Grande wore to the ceremony, meeting a barrage of criticism over the outfit being perceived as inappropriate for the occasion.

The bishop who officiated the Queen of Soul’s  funeral service on Friday, Charles H. Ellis III, has apologized to Ariana Grande in an interview to the Associated Press for the way he touched her on stage and a joke he cracked about her name.

"It would never be my intention to touch any woman’s breast. … I don’t know I guess I put my arm around her," Ellis said, adding: "Maybe I crossed the border, maybe I was too friendly or familiar but again, I apologize," he said at the cemetery where Franklin was laid to rest following the funeral service.

He then added that “the last thing” he “wants to do” is “to be a distraction to this day.” “This is all about Aretha Franklin,” he summed up.

After Grande’s performance of one of Franklin’s signature hits, "(You Make Me Feel Like) "A Natural Woman," which she also sang on August 16, shortly after Franklin’s death, Ellis called the singer to the podium, with close-up images of the moment showing his hand well above Grande’s waist with his fingers pressing against her rib cage.

The embarrassing gaffe came to light after many people took to Twitter to post the respective macro pictures, hashtagging, #RespectAriana.

Ellis separately apologized to Grande, her family and Hispanics for his banter about her name, which many perceived to be “racist.” As soon as Grande finished her rendition, prompting a standing ovation, Ellis grabbed her just below the chest and attempted to amuse the audience with a “dad joke,” saying that when he spotted Grande’s name on the program, he “thought that was a new something at Taco Bell,” referring to a restaurant chain that serves Mexican-inspired fast food.

"I personally and sincerely apologize to Ariana and to her fans and to the whole Hispanic community," Ellis said late Friday, and then voiced an excuse: "When you’re doing a program for nine hours you try to keep it lively, you try to insert some jokes here and there."

Both episodes, along with a small black dress that Grande wore to the funeral ceremony couldn’t help but draw loads of attention on social networks.

“Is it just me or… was this pastor just a bit too much with Ariana Grande?”  Perez Hilton asked on Twitter, with author Mona Eltahawy continuing:

“I don't care what you think about Ariana Grande, her music or her dress. This is wrong. That bishop's hand should not be on her breast: I just saw this because I've been working and not watching.”

It’s troubling that a Taco Bell joke (which was extremely ignorant) is overshadowing the fact that Ariana Grande was groped during Aretha Franklin’s memorial service. pic.twitter.com/clR9TbrgxZ

“It makes me sick how he was touching Ariana Grande sexually multiple times on live tv, you could tell she was uncomfortable like wtf I feel so bad for her,” a different user weighed in, drawing other people’s attention to the way the men present glanced upon Grande as she was into her singing. “The whole time all those men did was sexualize her,”  the user concluded.

Fans to Pay Last Respects to Aretha Franklin Before Funeral

Aretha Franklin Dies at 76; What Post-War Afghanistan Will Look Like