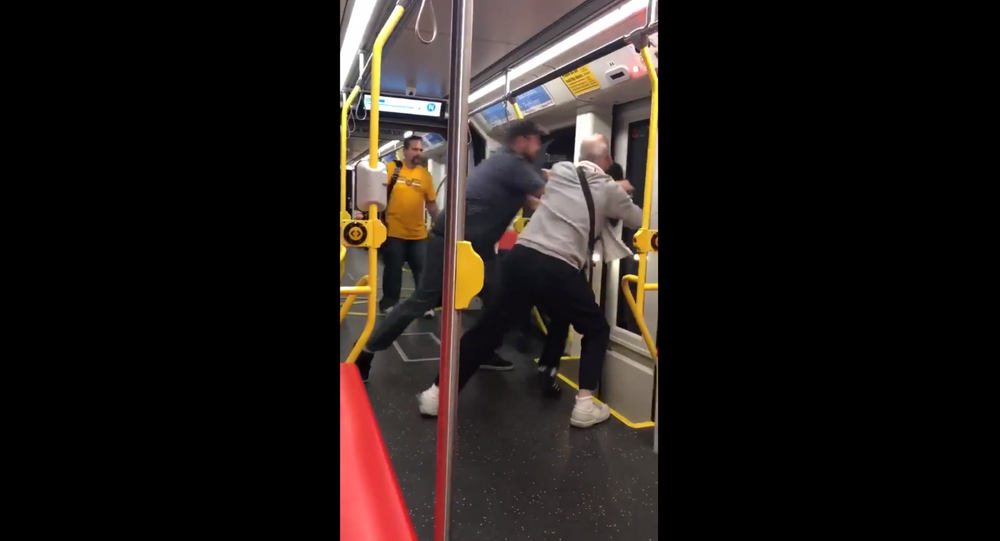 Two men aboard the Muni train in San Francisco, California, were caught this week roughing up and booting a fellow passenger from the transit car because he was playing music too loudly.

Footage shared on social media Friday by journalist Anna Sterling captures the moments after the passenger is initially confronted about his music. The two videos posted by Sterling show one of the bothered commuters placing the "kid" in a headlock, before pushing him out of the train car with the help of a gray-haired man.

The videos were not recorded by Sterling, rather by a "witness at the scene," the Oakland-based reporter stated on Twitter. The incident took place Thursday night on the N-Judah Muni line between 32nd and 40th Ave, the San Francisco Examiner reported.

​In the first recording shared by Sterling, a woman can be seen confronting the grown men, urging them to stop. "Guys, he's a kid!" she says. It's unclear how old the minor is.

"I'm fine… I'm fine stopping. I got no problem," he adds. The aggressive passenger later directs his attention back to the minor, asking, "Do you want to stop?"

Although it's unclear why the minor is targeted again, the second video shows his aggressor and a pal push him off the train.

​"What the f**k?! What the f**k, bro!" the minor says as the two grown men are trying to forcibly remove him from the train. At one point, the man in the flat cap is repeatedly seen trying to knee the minor in order to push him off.

Throughout this encounter, no other passengers physically confronted the men or attempted to break the scuffle up.

According to Sterling, the woman filming the encounter got off the train with the young man to offer him help. It's unclear if he required or received medical attention.

Paul Rose, spokesperson for the San Francisco Municipal Transportation Agency (SFMTA), told the Examiner on Friday that a joint investigation with the San Francisco Police Department has been launched on the matter. "This is very disturbing video," he said.

The SFMTA issued remarks on Twitter on the incident, indicating that the train operator had reported the altercation to the agency's Central Control Staff on Thursday and that surveillance footage captured on the train had been shared with investigators.

Outraged viewers have taken to social media to call out the pair for their behavior.

​None of the individuals involved in the scuffle have yet been identified.