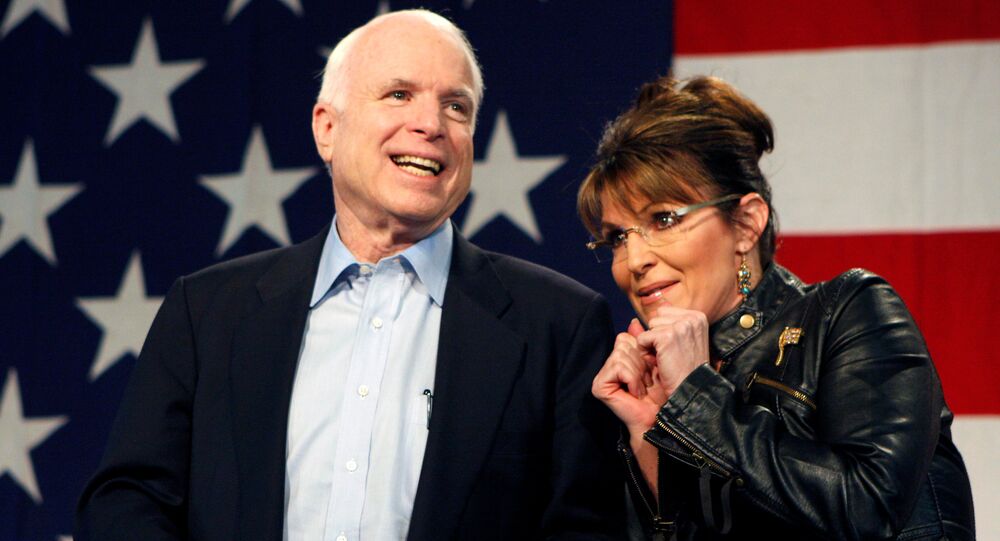 The move to exclude McCain’s former running mate from the list of invitees is thought to have originated “in the family,” with Cindy, McCain’s wife, reportedly set to “protect” the legacy of the senator, who passed away on Saturday following a year of battle with brain cancer.

Multiple sources have confirmed to People magazine that President Donald Trump and former John McCain presidential running mate Sarah Palin are not invited to attend the funeral ceremony of the late Arizona senator.

“Invitations were not extended” to the two political figures, confirms Carla Eudy, a fundraiser who has been communicating and working closely with the McCain family for many years.

“I want to make that clear. It wasn’t a no-trespass order. They won’t be turned away by guards if they show up at the funeral,” the source specified.

The reports might have apparently surprised Palin, as she has recently expressed nothing but praise for the late politician in an exclusive interview with DailyMailTV, in which she said they “have always had great conversations,” being able “to agree to disagree, certainly on political issues.”

“Out of respect to Senator McCain and his family we have nothing to add at this point,” the Palin family source told NBC News White House Correspondent. “The Palin family will always cherish their friendship with the McCains and hold those memories dear.”

In wake of McCain’s death on Saturday, Palin paid tribute to the senator on Twitter, mourning the loss of an “American original” and stating that he “was her friend,” “a maverick and a fighter.”

John McCain was my friend. I will remember the good times. My family and I send prayers for Cindy and the McCain family.
— Sarah Palin and family pic.twitter.com/KRvcIQ99cA

Reports of Palin not being invited to the memorial ceremony hit a raw nerve on Twitter, with one user even suggesting that Palin should be appointed to fill McCain’s Senate seat for Arizona. “Imagine the fun, watching the mainstream media go insane. Somebody please make this idea go viral,” he summed up.

Know what I wish? I wish the Governor of Arizona would ask Sarah Palin to move to his state, and then appoint her to fill McCain’s term.

Some billed the McCains’ reported gesture as a “classless act,” picking up on media chewing over McCain’s death and ignoring the Palin news.

Another user reiterated the idea, claiming that McCain’s staff “allowed the media to disparage her”:

I believe that Sarah Palin, faults & all, gave her all and was never supported by McCain's staff.They allowed the media to disparage her every step of the way & she never publicly complained. McCain's final diss just shows what a low class loser he was. Let's forget about him now

McCain’s votes and Palin’s efforts that “he owed this to” couldn’t escape the Twitterati’s attention either:

A huge number of votes that he got were for Sarah Palin.

McCain ALSO banned Sarah Palin, who had been nothing but supportive of McCain. McCain even instructed his family to tell her she's not welcome. What a small, petty man McCain was.

By excluding Sarah Palin, he's also rejecting the ones who supported and voted for him. Not a very noble note to end on.

One user essentially pointed to the fact that Palin “wasn’t just not invited, but disinvited:”

Sarah Palin wasn't just not invited to John McCain's funeral, she was disinvited. Who does this?

McCain's treatment of Sarah Palin after the election says everything about his character in his later years. His campaign was DOA, zero energy, until she came aboard.

Sarah Palin was heroic standing up to a Democratic Party & MSM gang rape of insult, condescension, abuse, slander, disrespect & derision, incl from McCain’s staff. Meanwhile, McCain stood by & only grudgingly defended her, depriving her of honor. He was a loser at that moment.

This year marks the 10th anniversary of McCain, who will be memorialized at a service in Phoenix on Thursday before his body is taken to Washington DC and buried on Sunday, selecting the former Alaska governor as his presidential running mate, who is also given credit for invigorating McCain’s poll numbers in his failed presidential bid in 2008.

In McCain’s newly released memoir “The Restless Wave: Good Times, Just Causes, Great Fights, and other Appreciations,” as well as a two-hour HBO documentary, he lauded Palin’s contribution to his campaign, but admitted for the first time that he regretted choosing her as his right hand. Palin responded at that point, describing her feelings over McCain’s regrets as a “perpetual gut punch,” adding that it is a far cry from what he had told her all those years.

Russian National to Act as Pallbearer for McCain – Reports