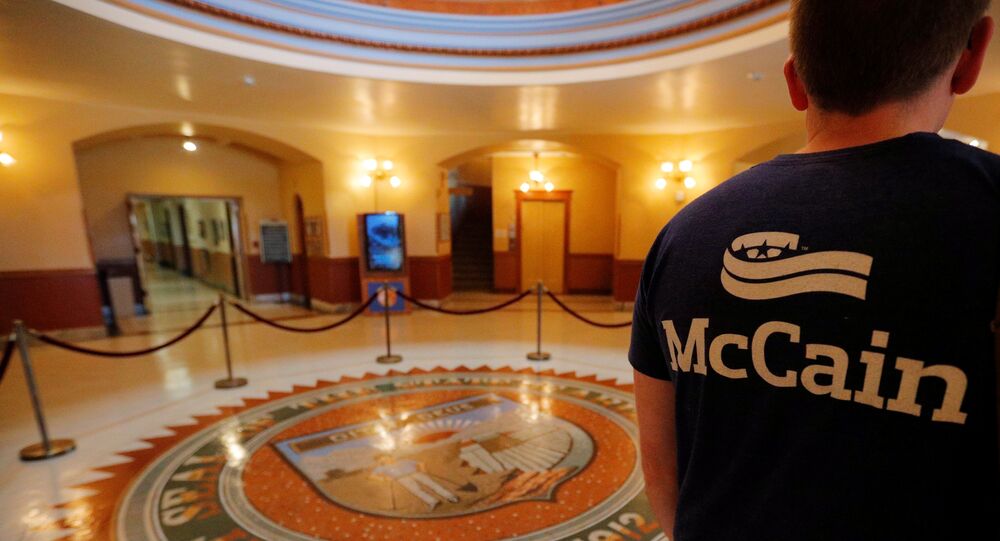 WASHINGTON (Sputnik) - The first of several tributes honoring the late US Senator John McCain began on Wednesday in Arizona, where the deceased lawmaker's flag-draped casket was placed in the US state's Capitol Rotunda for a formal ceremony.

McCain's wife Cindy, who has been discussed as a possible appointee to fill his Senate seat he had held for 31 years attended the ceremony and cried over the coffin. So did his daughter Meghan, a US TV personality.

© Sputnik / Alexey Vitvitsky
UK MP Says NATO HQ Should Be Named After Late US Senator John McCain - Reports
McCain, the unsuccessful Republican candidate for president in 2008, died on Saturday at the age of 81 following a long struggle with brain cancer.

The late senator championed punitive sanctions on Russia and a hard-line confrontational policy to the end. He was a bitter critic and opponent of President Donald Trump for repeatedly suggesting that the United States seek improved relations with Russia.

McCain's body lay in state at the Arizona State Capitol on Wednesday and will be honored similarly in the US Capitol Rotunda in Washington on Friday. There will be a private funeral service at the US Naval Academy in Annapolis, Maryland, on Sunday.

READ MORE: Remembering John McCain — "The Maverick" of the Senate

Russian National to Act as Pallbearer for McCain – Reports

Remembering John McCain - "The Maverick" of the Senate