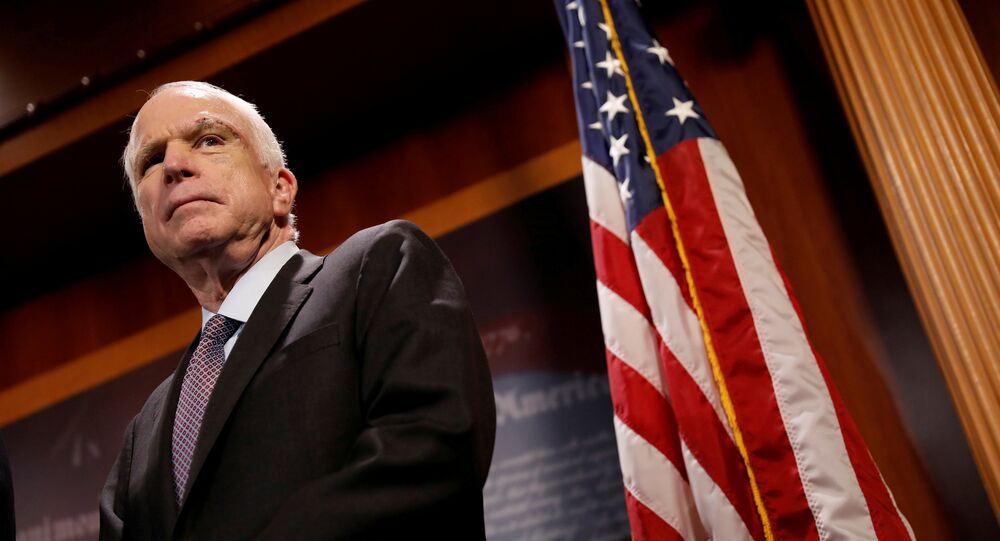 Last Sunday, US President Donald Trump reportedly rejected a White House statement aimed to praise John McCain as a "hero" and give him credit for his military service. The 81-year-old Republican Senator died on August 25 after a protracted battle with brain cancer.

Republican Senator Johnny Isakson has warned anyone, including US President Donald Trump, against speaking negatively about Senator John McCain, who passed away late last week at the age of 81.

"I don't know what's going to be said in the next few days about John McCain […] but anybody who in any way tarnishes the reputation of John McCain deserves a whipping, because most of the ones who would do the wrong thing about John McCain didn't have the guts to do the right thing when it was their turn," Isakson pointed out.

READ MORE: McCain Was 'One of the Last Big Names' in the Senate — Investigative Journo

He urged "the [US] president or anybody in the world to pause and say this was a great man."

"He gave everything for us. We owe him nothing less than the respect that he earned," Isakson, who is known for supporting US wars in Iraq and Afghanistan as well as backing Islamist terrorists in Syria, added.

His remarks came a few days after The Washington Post reported that Trump had rejected a statement made by White House staffers which aimed to praise McCain as a "hero" and pay tribute to his military service.

READ MORE: John McCain Was the Embodiment of the US Deep State – Journalist

Trump said that that he preferred to tweet his condolences, in which he just mentioned his "deepest sympathies and respect" which "go out to the family of Senator John McCain." Trump also tweeted that "our hearts and prayers" were with McCain's dear ones.

Commenting on Trump's reaction to McCain's death, Mark Corallo, a former spokesman for Trump's legal team and a longtime Republican strategist, said that "at a time like this, you would expect more of an American president when you're talking about the passing of a true American hero."

Corallo was echoed by Mark Hertling, a former senior military commander, who admired McCain for his visit to Mosul during the first Iraq War, saying that the 45th president's response was "very shallow."

In 2015, then-US presidential hopeful Trump made a comment in Iowa that McCain was "a war hero because he was captured" as he was captured and tortured in Vietnam for almost six years. "I like people who weren't captured," Trump said, generating widespread criticism.