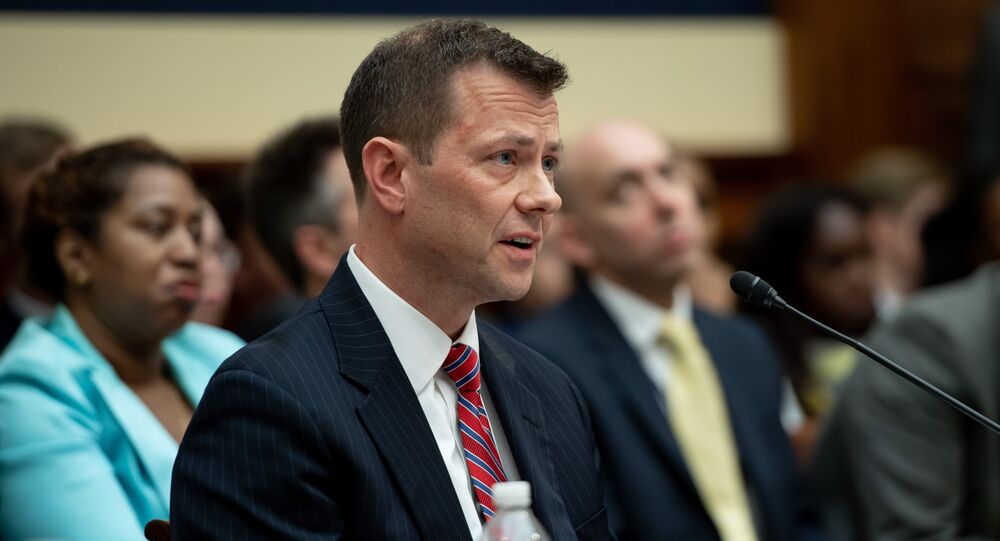 The FBI has fired Peter Strzok, the agent who spearheaded the Trump-Russia investigation at the end of his 21-year career with the Bureau.

Ray McGovern, a 27-year intelligence analyst with the CIA, told Sputnik News that Strzok's firing was "a long time coming."

Strzok, who initiated the investigation into alleged collusion between US President Donald Trump's presidential campaign and the Russian government before the leadership role was handed over to Special Counsel Robert Mueller, has faced immense scrutiny since he was removed from Mueller's team after a slew of anti-Trump text messages he exchanged with an FBI attorney whom he was having an affair with were uncovered.

That lawyer was Lisa Page, who quit the FBI after she was also pushed out of Mueller's orbit.

Christopher Steele, the author of the infamous but unverified Steele Dossier, exchanged at least four phone calls in 2016 with Department of Justice Associate Deputy Attorney General Bruce Ohr, whose wife worked for Fusion GPS, one of the companies paying for the document's furnishing. The three had dinner on July 30. On July 31, Strzok opened the Russia case. Both Hillary Clinton, through a company called Perkins Coie and Fusion GPS, and the FBI paid Steele for his work, McGovern noted.

"The FBI usually doesn't fire people. Firing someone shows that an FBI worker could have done something wrong," McGovern said. "And they don't like that, so they always work out a deal.

"Strzok is very exceptional here in making no bones about the fact that he had been fired, and of course if anybody looks at this in an objective way, he was surely fired for cause," McGovern said. "The whole thing stinks to high heaven. Even the FBI wouldn't let this guy go the normal way."

"I'm told by my FBI friends that even if you do really terrible infractions, you'll be allowed to resign instead of be fired, because they don't want it to get out that the FBI did terrible things," he said.

Included in the some 50,000 text messages between the couple were a number of incendiary remarks about both president and candidate Trump, as well as Russian people. An additional 50,000 — a figure tweeted by Trump — were deleted from Strzok's FBI-issued device in what the Department of Justice has characterized as a glitch.

Meanwhile, there were many messages that were not reviewed by the Department of Justice inspector general. Strzok revealed in public testimony that he was able to strike a deal over the messages on his personal phones and emails to Page and did not turn them over to the IG to be reviewed. According to the former agent, he reviewed them himself with the intent of turning over any messages pertaining to FBI business, but said that there were none. He admitted during the hearing that he himself made the call on what was personal and what was professional.

"The irony of that was, that's the privilege that they [also] afforded [Secretary of State] Hillary Clinton," Mcgovern noted.

The most viral of the texts was Strzok's response to Page when asked whether Trump would ever be president, sent just a little more than a week after Strzok started the counterintelligence collusion probe. "No. No he won't. We'll stop it."

Days prior, Page texted Strzok that he was "meant to protect the country from that menace [Trump]."

"I can protect our country at many levels," he assured her.

The pair also discussed taking out an "insurance policy" against a Trump presidency with then-FBI Deputy Director Andrew McCabe, who was fired in March 2018, in his office. "I want to believe the path you threw out for consideration in [McCabe's] office — that there's no way he gets elected — but l'm afraid we can't take that risk. lt's like an insurance policy in the unlikely event you die before you're 40," Strzok texted Page in mid-August 2016.

Eventually, Strzok conceded that when it came to "realistic outcomes" of the Russia case, he had "concern there's no big there there," in May 2017, the month Mueller was directed to investigate collusion and "any other matters [that] arose or may arise directly from the investigation."

Strzok publicly testified before Congress on July 12, 2018, and Page testified behind closed doors the following day. McGovern said Page "spilled the beans" when she reportedly confirmed that Strzok's message about there being no "big there there" regarded the Mueller probe.

Page's testimony was the "last straw for Strzok," McGovern said.

© Sputnik
Has the Manafort Trial Pulled the Mask Off the Mueller Investigation?

Despite Strzok's low assessment of the Mueller probe, he had few nice things to say about Russia. "F**k the cheating motherf**king Russians. Bastards. l hate them," he told Page more than a month before launching the counterintelligence probe. He also called Guccifer 2.0, who leaked the Democratic National Committee emails (and is alleged to be the online persona of 12 Kremlin hackers by Mueller) a "sleazy Romanian," a people which he said have the "crookedness of the Russians." He also told Page that Russians are "f***ing conniving cheating savages."

Strzok and Page, before working on the Russia investigation, were on the team probing Hillary Clinton's use of a private email server containing classified materials.

McGovern noted text messages between the two which showed that they both "really liked Hillary," and added that they, and fired FBI Director James Comey, were operating under the assumption that she would win the presidency.

The OIG report on FBI activity in the run-up to the election noted that in the FBI's final version of its account of Clinton's private email server use, the term "grossly negligent" was changed to "extremely careless." Senator Lindsay Graham (R-SC) noted in Congressional testimony with Inspector General Michael Horowitz that the former term "is a criminally liable standard."

McGovern said that the term was changed on Strzok's computer. The agent, he said, was relied upon by FBI top brass to carry out their marching orders. He added that Strzok and Comey "let Hillary off the hook," giving her a "‘get out of jail card.'"

Trump celebrated Strzok's firing on Twitter, arguing that since Strzok was "in charge of the Witch Hunt," as he has frequently called the Mueller probe, that it should be dropped, adding that it was "a total Hoax. No Collusion, No Obstruction — I just fight back!" In another tweet, Trump noted that Strzok was "in charge of the Crooked Hillary Clinton sham investigation," called it a fraud and argued that it should be conducted again.

McGovern said that the "deep state" has "six ways" to ruin a person, adding that the media "is completely on the side of the deep state." There's a "lot of bad stuff here. I've never seen it quite so bad," McGovern told Sputnik News.

Republicans have hammered the text trove not for the anti-Russian animosity displayed therein, but for anti-Trump bias, arguing that Strzok's statements that "Trump should go f himself," and things of that sort, showed that the FBI was acting politically.

However, the Office of the Inspector General claimed that bias did not affect any FBI activity. When Strzok testified publicly in front of Congress, liberals hailed him as a hero, some even suggesting that he himself should run for president.

Now that the longtime FBI veteran has been fired, his team has launched a Go Fund Me, raising more than $48,700 in just six hours with a total goal of $150,000 for the man who was once number two in the FBI's counterintelligence division. In the following hour, the fund for Strzok reached $60,000. In the eighth hour, it hit $70,000.

After Strzok was kicked out of the Mueller probe and the affair with his colleague was uncovered, he was moved to Human Resources (HR). Now, he's been kicked to the curb in what the Go Fund Me describes as a decision "apparently driven by political pressure."

In other words, according to the fund's organizers, the Bureau's treatment of Strzok while he was an employee, and all actions undertaken by the Bureau while he was there, were not politically motivated; just his firing. The argument is "they're political and we're not," McGovern said.

The fundraiser page cites the Weekly Standard — a magazine run by neoconservative-turned-Never-Trumper Bill Kristol — characterizing the firing of the former agent as a witch hunt and an "overwrought tale of bias."

The page argues that the man who texted his colleague whom he was having an affair with that he was "partial to any woman sending articles about how nasty the Russians are" is really a "proud husband and father."

"McCabe did the same thing. They're trying to elicit sympathy for the tough treatment that they've gotten from their masters," McGovern said. "Maybe they'll have to find some honest work."

Mueller Wants to Ask Trump About Obstruction of Justice - Reports