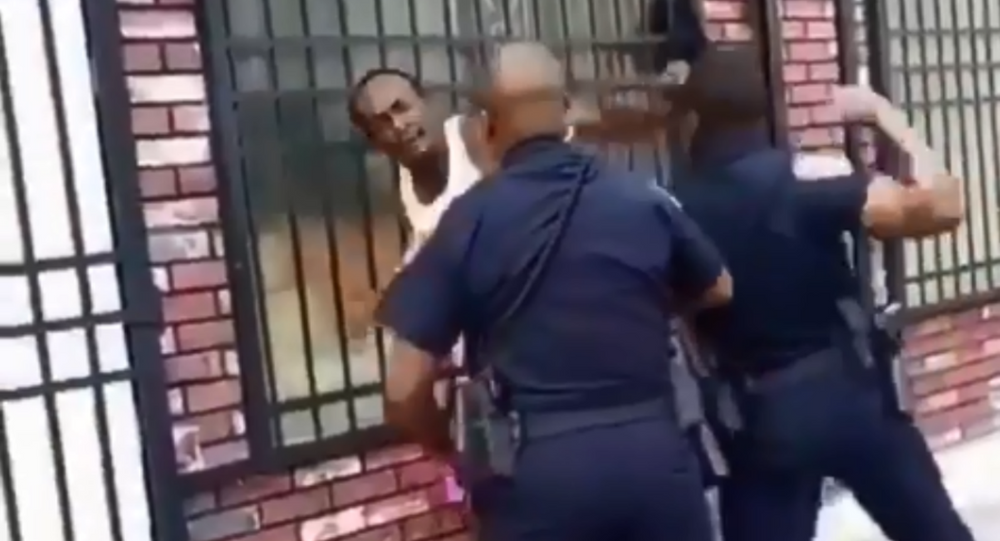 An officer from the Baltimore Police Department submitted his resignation letter over the weekend after footage of him beating a local man on Saturday surfaced online.

Although the department has steered away from identifying the officer, Warren Brown, the attorney for the man who was beaten, named the cop as Arthur Williams. According to The Baltimore Sun, Williams has been with the department since 2017, having graduated from the police academy in April.

Video footage of the altercation shows the officer approaching 26-year-old Dashawn McGrier and then opting to repeatedly punch and push him onto a set of stairs. Once on the ground, the officer remains on top of McGrier as he shoves his arm into McGrier's face.

Throughout the altercation, a fellow officer can be seen trying to break up the fight. However, because he fails to use any force, the assault on McGrier continues.

Warning: Video may be harsh for some viewers.

​In a statement released by the department late Saturday, officials explained that the incident took place as the officers "were working a special cross borders crime initiative in the area" and that one of the officers was "familiar" with McGrier.

"Almost immediately, the Baltimore Police Department began receiving videos of the confrontation," the statement reads. "The Office of Professional Responsibility was immediately dispatched to the area."

"On a day that we graduated future Baltimore police officers, I am deeply concerned by the conduct I witnessed today [Saturday]," Tuggle said in the statement. "While I have an expectation that officers are out of their cars, on foot and engaging citizens, I expect that it will be done professionally and constitutionally. I have zero tolerance for behavior like I witnessed on the video today. Officers have a responsibility and duty to control their emotions in the most stressful of situations."

According to Brown, McGrier was admitted to a local area hospital to undergo X-rays for his jaw, nose and ribs for suspected fractures, the Sun reported. McGrier was not charged with a crime.

McGrier was previously involved in an incident with Williams in June that ended with him being charged with assaulting an officer, disorderly conduct, resisting arrest and obstructing and hindering.

"It seems like this officer had just decided that Dashawn was going to be his punching bag," Brown told the Sun. "And this was a brutal attack that was degrading and demeaning to my client, to that community and to the police department."

On Sunday, a day after the footage of the altercation made its rounds on social media, the Baltimore Police Department released an update on the matter, announcing that Tuggle had accepted the officer's resignation.

​When Tuggle was questioned on Monday during a press conference on the incident, the interim commissioner noted that the department would be reviewing bodycam footage from the June altercation for its investigation, even though no complaints had been filed.

He also indicated that officers are trained to not let their emotions control how they react to community members. "If it were borne out of emotion, we are trained — we should be trained — to never act in an emotional way, particularly when it comes to engaging with citizens," Tuggle said.

As the police investigation remains ongoing, Brown told local media outlets that his client plans to take legal action against the police department and Williams. The second officer who was on the scene will remain on administrative duties pending the criminal investigation, according to police. No charges have yet been brought against Williams.