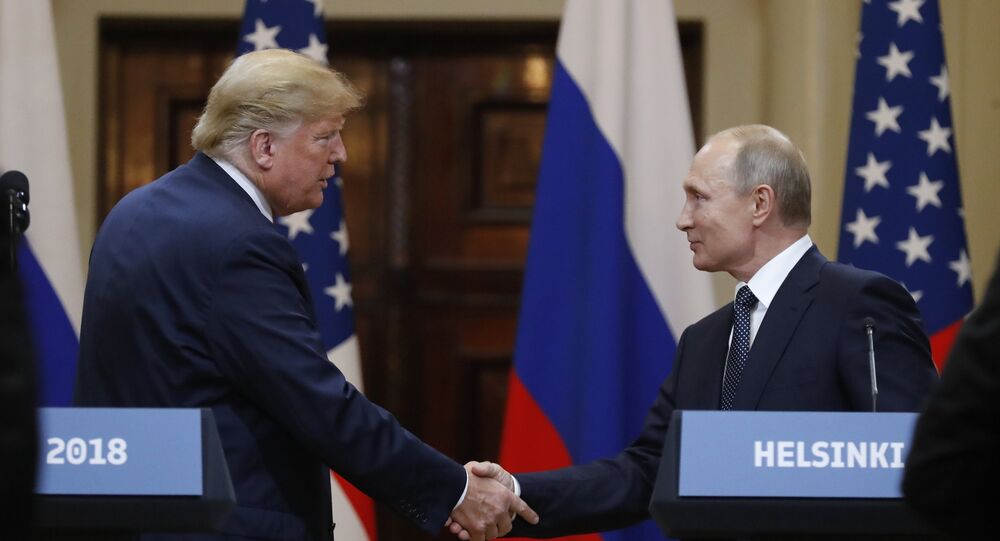 A list of proposed topics for negotiation, not previously made public, offers new insights into the substance of the July 16 summit between presidents Vladimir Putin and Donald Trump.

During their meeting in Helsinki last month, Russia’s President Vladimir Putin presented his US counterpart Donald Trump with a series of concrete initiatives on disarmament, nuclear arms control and a proposed ban on weapons in space, the newspaper Politico wrote on Thursday citing the English translation of a Russian document containing the proposals Putin made to Trump during their July 16 dialogue.

© AP Photo
Pentagon Allegedly Taken by Surprise Over Putin-Trump Military Agreements
According to the newspaper, the Russian proposals include a five-year extension for the so-called New START Treaty on limiting nuclear arms which was signed by Putin and then-President Barack Obama in 2010 and later ratified by the Russian parliament and the US Senate.

The document also addresses rising tensions in Eastern Europe, proposing that Washington and Moscow "take measures in order to prevent incidents while conducting military activities in Europe, as well as to increase trust and transparency in the military sphere."

It also calls on the two sides to "initiate expert consultations to identify destabilizing kinds of arms, to take them into account in the arms control mechanism."

According to Politico, the document proposes "strategic stability" consultations, led by the two countries’ deputy foreign ministers to tackle a host of thorny issues.

It also recommends dialogue in the so-called 2+2 format between the US Secretaries of State and Defense and their Russian counterparts, as well as meetings between the heads of the US and Russian armed forces.

"There were no commitments to undertake any action, beyond agreement that both sides should continue discussions. The president did not receive any written proposals from President Putin, and the president did not provide any written proposals to President Putin,” National Security Council spokesman Garrett Marquis said when commenting to Politico on the initiatives Vladimir Putin reportedly presented to Donald Trump in Helsinki.

The newspaper also quoted John Rood, undersecretary of defense for policy, as writing in July that “we're in the process of trying to arrange a period of time, a date and a place, to meet to have strategic stability talks.”

He added that the talks would ideally involve "clear understandings of how we regard nuclear doctrine."

During their first full-scale meeting in Helsinki last month, presidents Vladimir Putin and Donald Trump discussed a wide range of bilateral and international issues. Emerging from two-hours of one-on-one talks the two leaders said that a big step forward had been made in relations between the two countries.