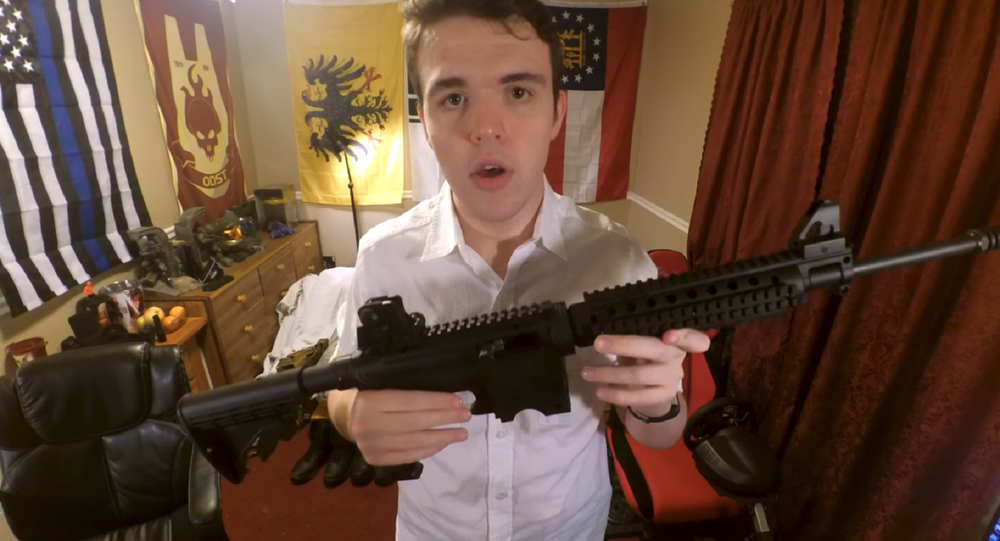 Two jail guards in Spalding County, Georgia, were fired just one day after a local anti-fascist (antifa) group published an expose revealing pro-racism and pro-Nazi posts the two had made online. Such ideologies are all too common in the US prison system, experts tell Sputnik News.

"This is a really common phenomenon," Paul Wright, editor of Prison Legal News, told Sputnik News Tuesday. He argued that white supremacy does, in fact, represent the view of many employed in America's carceral institutions. "The American police state likes to employ white supremacists, and it is tolerated, if not outright encouraged at the highest levels."

"Nazism, the [Ku Klux Klan] and white supremacy is perfectly OK for the people that run the American police state," he continued. "That's literally just a value judgement that they've made."

On social media platforms like Facebook, Instagram, YouTube and Reddit, in addition to the gaming platform Steam, Jones and Costner repeatedly expressed white nationalist views. In a comment viewed by Sputnik News on one of his YouTube videos about a video game set in Nazi Germany he wanted to get made, Costner said he didn't want the makers "to demonize the 3rd Reich."

In a photograph removed by Facebook but re-uploaded by Costner with responses to it superimposed over the original, Costner shared a swastika flag hanging in his living room. In another YouTube video viewed by Sputnik News, flags adorning Costner's walls include a "Blue Lives Matter" flag and a Reichsadler, a stylized heraldic eagle used in coats of arms of the Third Reich.

"You don't see this behavior in corporate America. I can't think of a single Fortune 500 or even Fortune 1000 company that's going to tolerate their employees goose-stepping around, giving heil Hitler salutes on company property during company hours, or that's hiring people with visible swastika tattoos and stuff like that," Wright said, adding that it the argument against it would likely be that such speech is "against" said company's "corporate values."

If one were to juxtapose what is acceptable in the private sector and "what passes as normal and totally acceptable in the government sector, I think the only conclusion you can draw is that basically the people running these organizations, these government agencies, are perfectly at ease and comfortable with overtly racist employees. That's the message being sent, and it's not lost on anyone," Wright said.

Wright highlighted reporting his outlet did on a prison guard in New York who was flying a swastika flag off his back porch, saying that officials argued, "‘Oh that's OK, you know, Johnny has got a free speech right to say whatever he wants to.'" The guard was also accused of distributing literature from the National Association for the Advancement of White People, a white nationalist association, but was never fired for either offense.

Wright called defending such posts under the guise of free speech argument "BS."

"If these guards were going around saying, ‘All victory to Osama bin Laden and al-Qaeda,' they would not have a job, but it's OK for members of the KKK and the Nazi party. I think if they were self-identifying as communists, they would not have jobs in the government sector," Wright said.

"I'll say this I am extremely right winged and I view racism as normal. Just read the definition of racism, and it's not a bad thing," Costner wrote. "I went from being a libertarian Conservative to more Authoritarian." He also bragged in the thread about knowing "real National Socialists" and added, "I've met normal everyday people that are ‘Nazi's.'"

Costner said of the American Nazi Party founder George Lincoln Rockwell, "I personally respect him and agree with a lot of his points," adding that modern day Nazis are a "joke" and "nothing like they used to be."

On Steam, Costner is a part of a group called "Fashy Dreams: The New Reich" which has a code "fashydreams1488." Fashy is short for "fascist," and 1488 refers to the white supremacist slogan "Fourteen Words," while 88 is an alphanumeric code for HH (Heil Hitler).

Jones, who joined the Spalding County Sheriff's Department in late 2017 alongside Costner, has the motto on his Steam profile "Hitler did nothing wrong." His profile photograph is the Blue Lives Matter flag.

Wright underscored the ideological underpinnings of prisons, telling Sputnik News that when his outlet, which receives wide circulation within prisons, reported on white supremacist activity in Washington state, the Department of Corrections "censored that issue of Prison Legal News," while at the same time it "allowed publications like White Aryan Resistance," a neo-Nazi publication, free flow "into the prison system."

Before becoming deputies, both Jones and Costner tried and failed to join the military due to medical issues.

For many in the prison sector, the "attraction to the police state is having power and impunity over other people," Wright said. "I mean, there aren't too many other jobs where you can just kill people with the assurance of very little personal risk, like going to prison or being held accountable."

"Courts have held repeatedly that, you know, using racial slurs against prisoners, lots of forms of racial harassment, do not violate the law when done against prisoners. In some contexts, it can rise to the level where it constitutes a ‘hostile work environment,' when it's done against fellow employees, but even then, that's still far from perfect."

© AP Photo / Sean Rayford
Sick of Seeing ‘Bodies Pile Up’: After Deadly Uprising, US Inmates to Strike for Better Conditions

Much of the time, such abuse isn't reported or isn't reported explicitly. "I think this comes up a lot in the employment context," Wright said, "where they create a hostile work environment where they harass minority employees as well as prisoners."

While Georgia, once a part of the Confederacy, may have a reputation for racism, "there's no geographic disparity" in the number of white supremacists in law enforcement and the prison system, Wright said. "We report this stuff happening all the time. It's happening all over the country, whether it's California, Washington, New York — wherever. There just seems to be this plethora of guards engaging in overt, organized white supremacist and racist activity."

"This is just scratching the tip of the proverbial iceberg," Wright said.

Why is the US Government Hosting Ukrainian Neo-Nazis?

'Nazis in Your Neighborhood': New Online Map Shows Where US Neo-Fascists Live