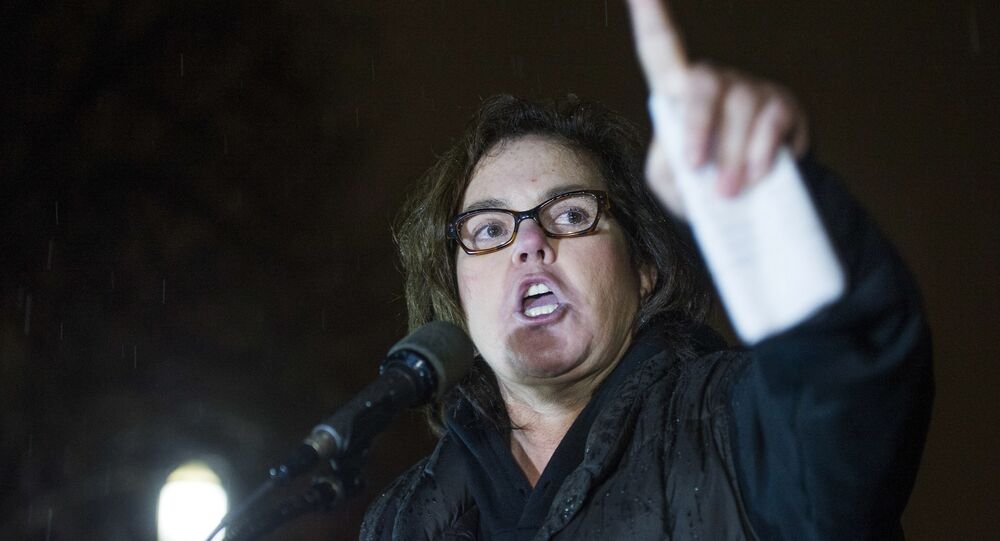 Longtime hater of US President Donald Trump, actress and comedian Rosie O’Donnell protested in front of the White House Monday night in the ongoing, astroturfed “Occupy” protests at Lafayette Park in Washington, DC.

Rosie joined the protests outside the White House — dubbed the "Kremlin Annex" by organizer Adam Parkhomenko — on their 22nd day since they started the night of Trump's return from Helsinki, Finland, after his high level talks with Russian President Vladimir Putin. She joined by a who's who of Broadway stars, including members of the cast of "Hamilton," a hit play among US liberals that reveres the founding fathers of the United States of America.

Protesters held signs saying things such as "don't trade our bald eagle for a Russian bear," and "Treason Traitor! KGB approved." One man wearing a mask of Trump held a sign with a picture of Putin on it saying "Meet my b**ch."

One of the speakers recounted how the protests got started on the night of the Helsinki summit, saying protesters realized that US democracy has been especially at risk since then. (It should be noted that former US presidents, including Barack Obama, George W. Bush and Bill Clinton, met with Putin while in office.)

She went on to address the crowd, telling them that in order to get rid of Trump, they should take note from Ukraine, Tunisia and other countries that have had their governments violently overthrown in recent years.

When Rosie arrived, she told the crowd that they should "keep coming back until [Trump] is out," telling them that she wanted to support their protest of "everything him and his administration have done, especially since Helsinki."

"The more people who show up here — we're gonna take over DC, and eventually he'll have no choice but to resign," Rosie said at the conclusion of her remarks.

As Sputnik News reported, Parkhomenko is a 15-year veteran campaigner for former Secretary of State Hillary Clinton and a volunteer police officer in Washington, DC.

Parkhomenko, a Ukrainian American, raised more than $100,000 for the protests in about two weeks, hoping to support a demonstration that will continue until Trump is ousted from office and perhaps cause the president to "flee to Russia like [former Ukrainian President Viktor] Yanukovych."

Yanukovych was ousted from office amid the 2014 Euromaidan protests in Kiev, which were rife with neo-Nazi and white nationalist symbols.

Parkhomenko refused to comment on the remark, telling Sputnik News only "thank you for your help."

Sputnik News attended two of the protests prior to the one on Monday, which have been held every night but one since the Helsinki summit. Protesters chanted the name of their favorite cable news host, Rachel Maddow, and heaped praise on the FBI and US Secret Service. Heavy use of homophobic slurs against Putin and Trump were also deployed by the Resistance in attendance.

The Facebook page for Occupy Lafayette Park, which uses the "black power fist" (a symbol of resistance that came into prominence during the Bolshevik revolution in Russia), is paying to promote its protests on Facebook, "calling upon all individuals with grievances against this administration to join."

It appears that Rosie has heeded that call. "I spend about 90 percent of my waking hours tweeting hatred towards this administration," she told late night show host Seth Meyers in November.

The feud between Trump and Rosie long predates the reality show host's presidential campaign — it started in 2006, when both were television celebrities. In Rosie's telling, Trump has directed fire and fury towards her since she made comments about his business going bankrupt four times and his otherwise allegedly shady business practices.

#TrumpVlog @Rosie wasn't even a short term fix at The View.

​The two have exchanged incendiary remarks about one another since. During the first Republican primary presidential debate, Fox News host and debate moderator Megyn Kelly asked Trump about his references to women as "dogs," "fat pigs" and "slobs."

On Twitter, Trump has called Rosie "crude, rude, obnoxious and dumb," adding that "other than that I like her very much." Rosie called Trump "sickNAZIf**kTRUMP" and "Putin's pr*ck" in a tweet featuring an image of special counsel Robert Mueller dressed as Superman.

Rosie has cheered on the special counsel's investigation, which has failed so far to reach its primary mandate of finding evidence of collusion between the Trump campaign and Russia.

"Today after your show, I'm going to get a Bob Mueller tattoo," she joked to Meyers, "right over my heart. I'm so in love with Bob Mueller, I want to get posters, I want to meet him."

She jokingly recounted a call with her therapist the night of Trump's election when she screamed at him about getting stuck in Boston without Xanax. "Mommy's better since Bob Mueller," she told Meyers in November.

Despite joking about her own drug use, Rosie has alleged that Trump himself requires medication and that he may fire Mueller.

As Rosie and the Broadway stars protested outside the White House, Mueller is preparing to celebrate his 74th birthday. Parkhomenko tweeted that on Tuesday, he'll be bringing cake to the demos.