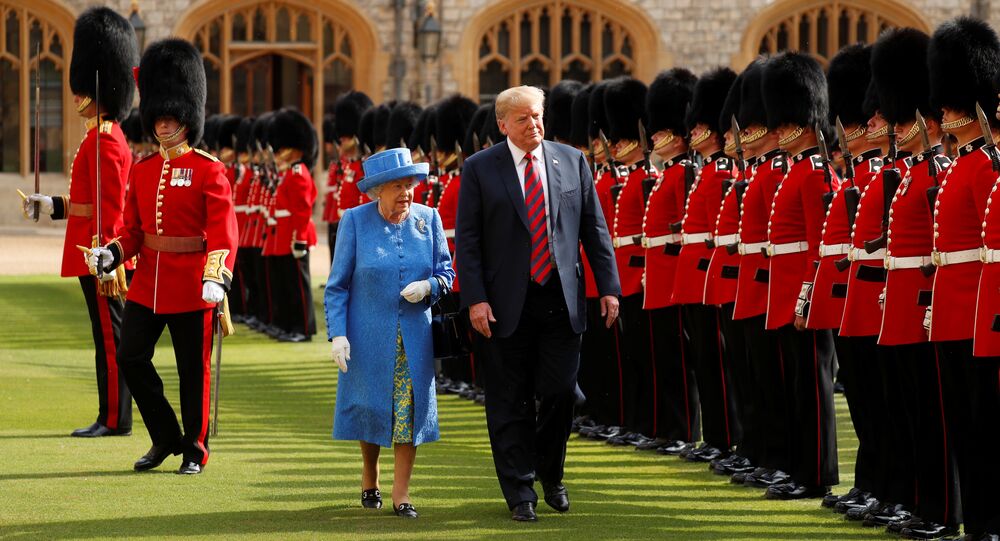 The US President shed some light on the details of his first official visit to the UK last month, saying it was Queen Elizabeth II herself who made the guests from the US wait for her, in contrast to the reports. However, Donald Trump praised the tea party and the sovereign, but encountered some trouble naming the country she’s from.

US President Donald Trump took aim at his archenemy, who he described this time as “fake, fake disgusting news media” during his rally in Pennsylvania, blaming them for telling lies about his latest visit to the UK and particularly meeting Queen Elizabeth II, whom he described as “incredible.”

Trump didn’t spare praises when describing Her Majesty, as well as the King's and the Queen's guards, whom he branded “wonderful people.” He said he was invited to have tea with the Queen, but had to wait for her in the guard’s company.

“I was about 15 minutes early and I'm waiting with my wife and that's fine. Hey, it's the Queen, right? We can wait. But I'm a little early. So, I then go up and meet the Queen and she is fantastic,” Trump told the crowd at the rally.

He also dismissed the idea that he’d overstayed his welcome.

“I didn't know this — it was supposed to last 15 minutes but it lasted like an hour. Because we got along. And she liked our first lady and our first lady liked her. 'But we got along fantastically well. But the time went by — you know, sometimes you get along and the time goes by,’” he said.

He concluded that the whole story about his being late and overstaying was wrong.

“But honestly, folks, it was such a beautiful, beautiful visit and afternoon. But they can make anything bad because they are the fake, fake, disgusting news,” Trump told the rally.

He also bestowed praises on the trip itself, striving to express his respect to the country he’d traveled to, while somewhat unsure as to where it began and ended.

“I have great respect for the UK — the United Kingdom. Great respect. People call it "Britain," they call it "Great Britain." They used to call it "England," different parts. But the UK — great respect,” he said, prompting mocking and roasting on-line for not knowing the name of the country he visited.

Confused as to what’s the difference between ‘Great Britain’, ‘Britain’ and ‘England’?

Luckily President Trump has cleared it all up for us… pic.twitter.com/XAL7njlGp8

People used to call it the Presidency. They used to have respect for the #POTUS #Trump #TrashTalk #England #Britain #GreatBritain #UK

​Some suggested a quick re-cap on the matter…

Hey Trump…#GreatBritain is an island separated from the European mainland consisting of England, Scotland & Wales.

Now include Northern Ireland from across the channel & you have the #UnitedKingdom.#England is England.

​…or some career perspectives.

​Others praised Trump for enlightening the Americans, pointing out his Scottish heritage.

I now have tremendous respect for Trump, for telling Americans that the UK isn't "England", which Americans like to call it. Very annoying as a Scot. His mammy would be proud. #indyref2now https://t.co/MEu7B8MYpo

Queen of England Might Have Used Jewelry to Troll Trump – Reports