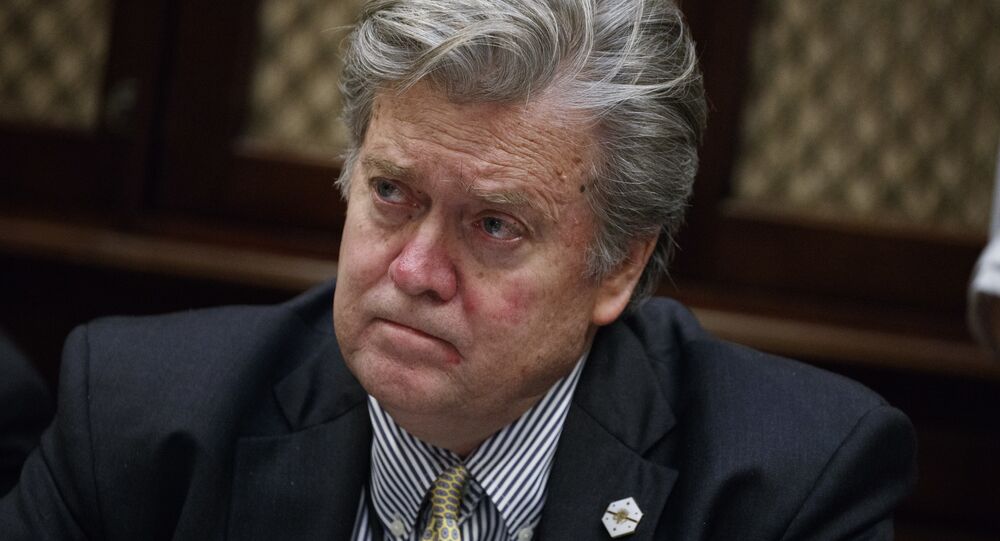 US Deputy Attorney General Rod Rosenstein is overseeing special counsel Robert Mueller’s investigation into allegations of collusion between the Trump campaign and Russia.

Rosenstein has recently faced scrutiny for his alleged withholding of sensitive information from the US Congress. Two US representatives, Mark Meadows and Jim Jordan, even filed a resolution to impeach Rosenstein over alleged obstruction of justice last month, but their effort failed to garner support.

© REUTERS / Leah Millis
US Attorney General Sessions Defends Rosenstein From House Impeachment Effort
The lawmakers claimed Rosenstein is withholding documents related to Department of Justice and FBI decisions during the 2016 US presidential campaign to end an investigation into former Secretary of State Hillary Clinton, the Democratic candidate, and begin spying on officials in the Trump campaign.

Bannon also claimed Rosenstein is "clearly obstructing justice" by not turning in the documents to Congressional committees and suggested the president fire him.

Bannon called Mueller a "good man" and "a combat-veteran Marine," but also urged him to release a preliminary report on his findings before the midterm elections, so that the people of the US can come to some conclusions on the investigation.

"Let the American people, on November 6, let them decide," Bannon said. "They are going to say that is too thin a reed to hang anything serious on."

In a July 29 tweet, Trump accused Mueller of having conflicts of interest.

"We had a very nasty & contentious business relationship, I turned him down to head the FBI (one day before appointment as S.C.) & Comey is his close friend," the president tweeted.

As he spoke, he insisted there was no collusion between Russia and Trump's campaign back in 2016. Moscow, too, has denied all allegations of interference in the election or coordination with Trump and his team.

Trump and Bannon parted ways after Bannon spoke critically of Trump and his family, according to Michael Wolff's book, "Fire and Fury: Inside the Trump White House."