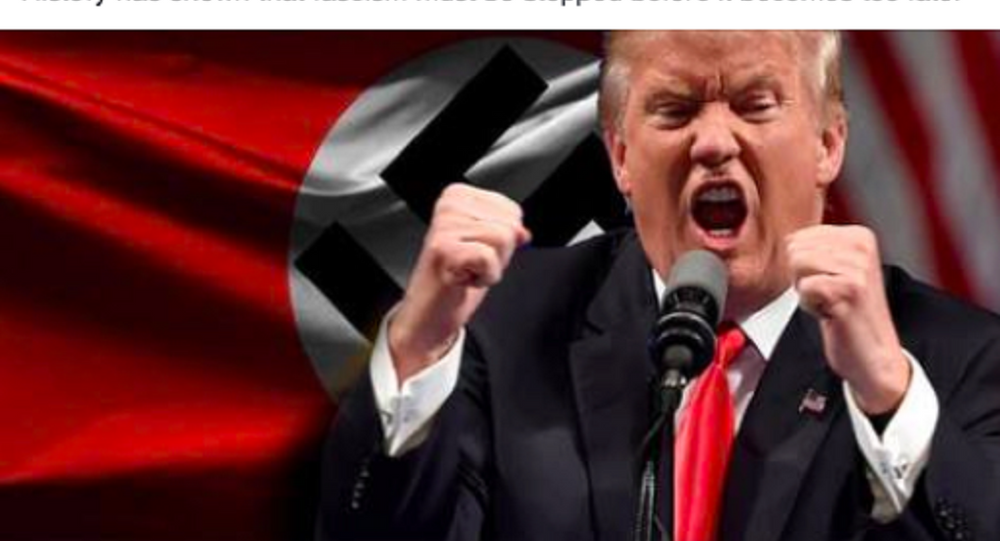 Facebook removed 32 pages and accounts from its platforms Tuesday, including Instagram, for engaging in “coordinated inauthentic behavior.”

While the accounts and pages remain unattributed, Facebook, lawmakers and much of the US media are pointing their fingers in the direction of Russia — though a browse through Facebook's actual blog post on the ban offers little support for that.

But if the mainstream media is to be believed, the supposedly Kremlin-run troll farm, the Internet Research Agency is determined to keep on shitposting despite the February indictment of 13 of its alleged operatives.

Facebook can't or won't say who's behind the latest round of banned pages, although lawmakers say they can. "It's clear that whoever set up these accounts went to much greater lengths to obscure their true identities than the Russian-based Internet Research Agency," the company said in a blog post. "We face determined, well-funded adversaries who will never give up and are constantly changing tactics."

"[We] don't have all the facts," the company said.

Facebook identified four of the pages they banned on Tuesday: Resisters, Aztlan Warriors, Black Elevation and Mindful Being. "The remaining Pages had between zero and 10 followers, and the Instagram accounts had zero followers," the company said. In total, the company claims some $11,000 was spent on promoting ads from the 32 pages.

It's yet another strike from Facebook's banhammer after the company set off a series of removals supposedly related to Russia: First, the company found 470 alleged fake Russian accounts, it said in September 2017; then, on April 3, Facebook banned 70 Facebook accounts, 65 Instagram accounts and 138 Facebook pages allegedly controlled by the Internet Research Agency.

However, the company noted, there isn't actually much evidence that the "resistance" type page is linked to that movement's favorite foe, the Kremlin. "While IP addresses are easy to spoof, the IRA accounts we disabled last year sometimes used Russian IP addresses," the company said. "We haven't seen those here."

However, "one of the IRA accounts we disabled in 2017 shared a Facebook Event hosted by the ‘Resisters' Page. This Page also previously had an IRA account as one of its admins for only seven minutes," said the social media giant.

The company argues that because of its heightened enforcement efforts, trolls must be especially sneaky to slip through, and as such, Facebook needs "to find every small mistake they make."

In most cases, the public has only been made privy to small amounts of information on the activities those now-deleted accounts were engaging in, such as: posting memes of Hillary Clinton in a devil suit engaged in fisticuffs with Jesus of Nazareth, promoting coloring books featuring a muscular Bernie Sanders and creating fake protest pages.

The latest round of bannings isn't much different and only reinforces the fact that none of the targeted accounts so far can be said to be spouting a Kremlin line, as there's no coherent ideology to be found.

Facebook showed one image of a protest against the Charlottesville anniversary (Unite the Right 2.0) protest being held in Washington, DC, which the Resisters page was organizing with a five other legitimate pages against the rally commemorating the deadly, neo-Nazi violence in Virginia in 2017. (There are several other similar protest events scheduled on Facebook for the same anniversary.)

The company also provided screenshots of posts from Black Elevation (an apparently fake job listing); Being Mindful (a psychedelic meme calling on humans to "unlearn" so they can "comprehend the infinite"); an anti-colonialism meme from Aztlan Warriors celebrating indigenous war heroes; and a feminist bullet list of things women "do not have to do."

Other images shared in a zip file follow the same themes.

Facebook
Facebook photo posted by the Mindful Being page, which has been accused of being set up by the alleged Russian troll farm Internet Research Agency.

The company also provided the an image for a protest hosted by Resisters which features an angry US President Donald Trump standing in front of a microphone against a backdrop of a Nazi swastika flag. That event was meant to be held on November 4, 2017, in New York City's Times Square, where there was already a highly hyped event scheduled by the Revolutionary Communist Party.

Since the pages are now taken down, Sputnik News used the Internet Archive to retrieve cached versions of the Resisters page, which billed itself as a place for "Online and offline feminist activism against fascism."

Most of the posts viewable by Sputnik News were pro-feminist or bemoaned the GOP's stances on abortion and climate change. One woman reviewed the page, saying, "They are telling the truth about the fake president." A man said, "This page relies heavily on the Anti-Trump rhetoric to gain likes and shares," complaining that the admins of the page delete comments that don't "coincide with their hatemongering [against Trump.]"

US Senator Mark Warner (D-VA) said Facebook's "disclosure is further evidence that the Kremlin continues to exploit platforms like Facebook to sow division and spread disinformation, and I am glad that Facebook is taking some steps to pinpoint and address this activity." Several other lawmakers also placed the blame on Russia, according to the Wall Street Journal.

"Russians and other nation states are absolutely attempting to manipulate us," Department of Homeland Security Secretary Kristjen Nielsen said in a Fox News interview. She added that Facebook should be "commended" for shining a light on the "very real" threat.

Facebook makes no mention of the US midterm elections in its post. However, a number of media outlets have tried to link the allegedly renewed Internet Research Agency effort to them, even though none of the posts published by Facebook or otherwise viewed by Sputnik News relate to the elections. In fact, the company said it only shared its incomplete findings because of "what we know today given the connection between these bad actors and protests that are planned in Washington next week."