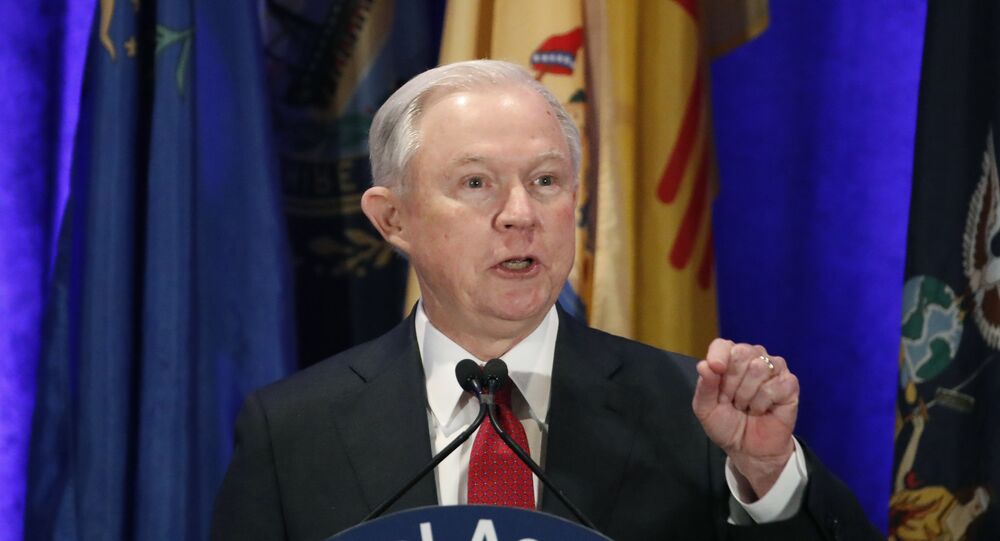 US Attorney General Jeff Sessions announced Monday the creation of a “religious liberty task force” to forestall what he called a “dangerous moment” for religious freedom in the US.

The attorney general said that with the creation of this task force, "religious Americans are no longer an afterthought."

Sessions announced the new initiative at the US Justice Department offices in Washington, DC, joined by the Alliance Defending Freedom, a conservative Christian advocacy group, and Jack Phillips, a Colorado baker whose refusal to serve a gay couple in violation of the state's nondiscrimination law was recently vindicated by the US Supreme Court, according to The Hill.

The task force will be co-chaired by Associate Attorney General Jesse Panuccio, who served as an attorney in 2010 for supporters of Proposition 8, California's same-sex marriage ban, Human Rights Watch noted.

Sessions made the remarks Monday at a Religious Liberty Summit hosted by the DOJ. He told the audience, "A dangerous movement, undetected by many, is now challenging and eroding our great tradition of religious freedom."

People are always asking me to do futurist prediction so here goes. I'm gonna go out on a limb and guess that the new Religious Liberty Task Force WON'T work on hate crimes and the surge in persecution of Muslims, Jews, Sikhs, and other religious minorities. OK, somebody pay me.

​"[I]n recent years, the cultural climate in this country — and in the West more generally — has become less hospitable to people of faith. Many Americans have felt that their freedom to practice their faith has been under attack," the chief lawyer of the US government said.

The task force's purview is based on an October memorandum the attorney general issued outlining 20 fundamental principles by which federal agencies should abide in order to refrain from impugning the religious liberties of Americans in employment, contracting and programming.

Sessions said the task force will "ensure all Justice Department components are upholding that guidance in the cases they bring and defend, the arguments they make in court, the policies and regulations they adopt and how we conduct our operations."

"In short, we have not only the freedom to worship — but the right to exercise our faith," Sessions said. "The Constitution's protections don't end at the parish parking lot nor can our freedoms be confined to our basements."

Jeff Sessions just announced they formed a Religious Liberty Task Force to ensure that all religious organizations have rights. Only by all organizations he means Christians, and by rights he means the freedom to impose their beliefs on others.

​HRC legal director Sarah Warbelow noted on the nonprofit's website Monday that the religious liberty task force "is yet another example of the Trump-Pence White House and Jeff Sessions sanctioning discrimination against LGBTQ people."

"Over the last 18 months, Donald Trump, Mike Pence and Jeff Sessions have engaged in a brazen campaign to erode and limit the rights of LGBTQ people in the name of religion," HRC's blog post states. "The attorney general standing shoulder-to-shoulder this morning with anti-LGBTQ extremists tells you everything you need to know about what today's announcement was really all about."

Under Sessions' aegis, the Justice Department has rolled back key legal provisions protecting LGBTQ people from discrimination. In 2017, Title VII and Title IX anti-discrimination protections, key parts of US civil rights legislation, were both ruled inapplicable to transgender people, effectively making it legal for education and public facilities to discriminate against them. The June 2018 case of the Colorado baker featured at the DOJ's summit, Masterpiece Cakeshop v. Colorado Civil Rights Commission, upheld the baker's right not to serve a gay couple based on the owner's religious objection to the couple's sexuality.

However, the court's ruling did not give a blanket endorsement to private business owners to discriminate, and in many ways actually affirmed the rights of LGBTQ customers. "Our society has come to the recognition that gay persons and gay couples cannot be treated as social outcasts or as inferior in dignity and worth," Justice Anthony Kennedy said in the majority opinion, decided on June 4.

Nonetheless, both Sessions and the Alliance Defending Freedom ran a victory lap, with the attorney general saying at the time, "The First Amendment prohibits governments from discriminating against citizens on the basis of religious beliefs… The Supreme Court rightly concluded that the Colorado Civil Rights Commission failed to show tolerance and respect for Mr. Phillips' religious beliefs."

HRC also noted that in January, the US Department of Health and Human Services announced the creation of a so-called "Conscience" Division, which empowered health care providers to discriminate against LGBTQ people, and has made moves toward protecting the rights of health care providers to deny potentially life-saving procedures and services to LGBTQ people and other minorities based on the providers' religious beliefs.

Equality FTW: Black, LGBT-Friendly US Pastor to Give Sermon at Royal Wedding