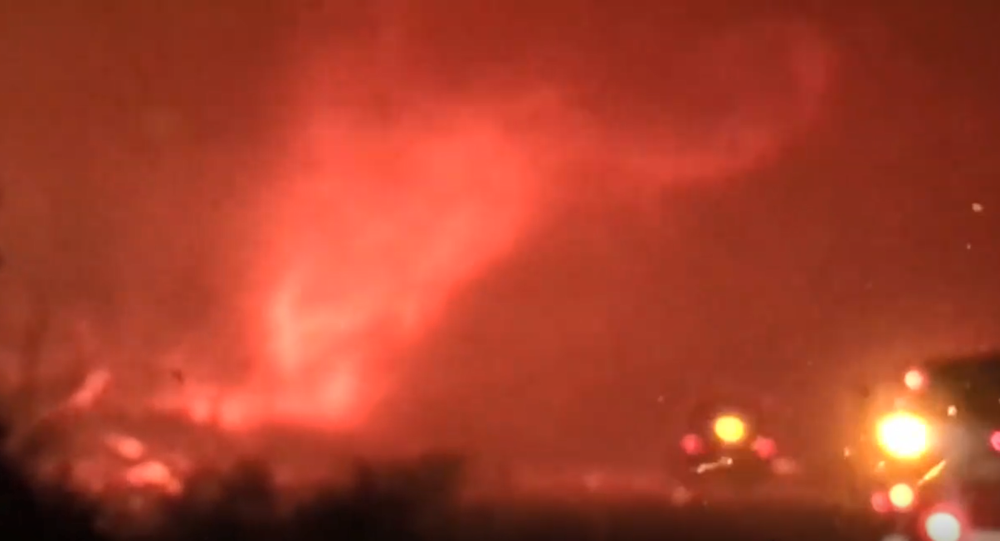 A police dashboard camera captured a startling sight near the Carr wildfire in northern California Friday: a swirling whirlwind of flames dancing above the blaze.

In the short video, a flaming vortex is seen spiraling along the ground from the fire toward a convoy of emergency vehicles.

Fire tornadoes ripping through the town of #Redding as the #CarrFire explodes to nearly 28,000 acres and only 6% contained; Live coverage on #TODAYinLA at 6 on @NBCLA Channel 4 https://t.co/A3ujbLG8Sv pic.twitter.com/817EERbn1s

​​The Carr Fire has devastated California's Shasta County, leveling dozens of homes and killing two people so far, while forcing over 37,000 to evacuate, the Sacramento Bee reported. The blaze has burned 44,450 acres so far, CNN reported, and is only 3 percent contained. Thursday it jumped the Sacramento River, which firefighters had hoped would halt progress of the blaze.

"There was literally a wall of flames coming into the city of Redding," Cal Fire Battalion Chief Jonathan Cox said in a press conference Friday morning. Two firefighters have died fighting the fire.

No, this is not a tornado. The Carr Fire in Shasta County created this rotation updraft. #CarrFire #California pic.twitter.com/CVvcafJBGK

​As of 8 a.m. Friday, Cox said the fire was no longer advancing, but firefighters were wary of what the afternoon would bring. The National Weather Service has predicted strong winds, and temperatures are projected to reach 111 degrees Fahrenheit.

Around 100 Firefighters Tackle Fire in Block of Flats in London (PHOTO, VIDEO)