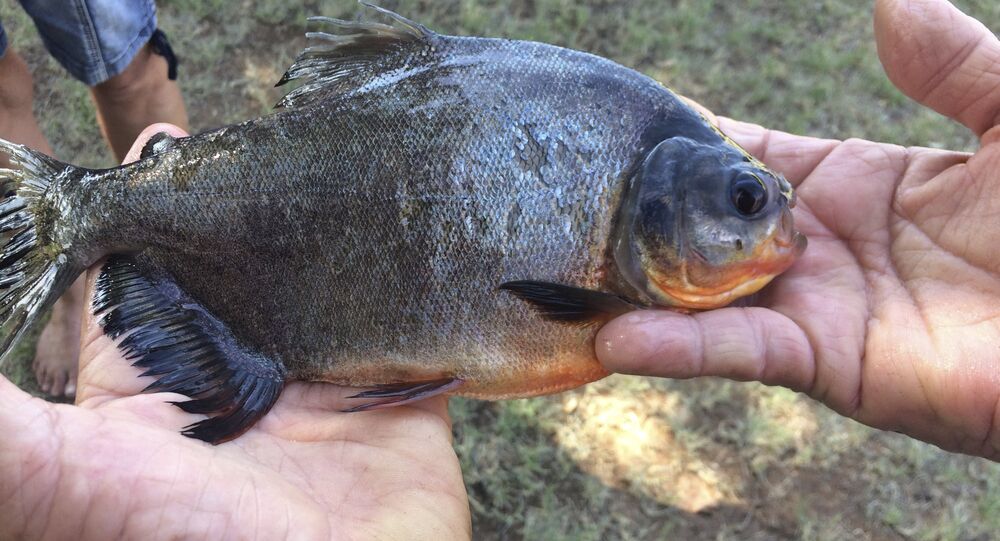 An Oklahoma girl went home last weekend with an unexpected catch: a tropical fish with human-like teeth and a reputation for biting swimmers’ exposed genitals.

The pacu, a relative of the far more vicious piranha, is typically found in the Amazon and Orinoco river basins, but they're being increasingly found in newer waters, thanks to owners dumping them into local streams or lakes when they get too big for their aquariums. That's how 11-year-old Kennedy Smith managed to snag one in Oklahoma's Fort Cobb Lake on July 22 while angling with nightcrawler bait, according to the Oklahoma Department of Wildlife Conservation.

"She was just fishing with a bobber and a worm just like so many kids do and pulls up this very unusual fish," Oklahoma DWC information supervisor Micah Holmes told KFOR, the local NBC affiliate. "It's very rare, fortunately. We want native fish in Oklahoma — not pacu, or any other non-native fish like this one, or an exotic fish."

Whoa, check out this catch! Oklahoma girl caught a #Pacu (invasive species normally found in South American waters) at Ft. Cobb Lake! Its most distinctive feature: human-like teeth 😬 How did it end up in the Sooner State? We explain on @kfor (photo credit: Oklahoma Game Wardens) pic.twitter.com/0pInHiFn2l

​Oklahoma Game Wardens posted on their Facebook page about the find, noting that "Pacu, unlike Piranha, primarily feed on plant material but are considered omnivorous," which is certainly a relief for Oklahomans.

"The introduction of the nonnative pacu into Oklahoma waters is most likely from individuals buying them as pets and releasing them when they outgrow the tank they were raised in. Pacu can reach sizes up to 3.5 feet and 88 pounds." However, the one Kennedy reeled in seems no bigger than a perch.

"Anglers who catch Pacu in Oklahoma are asked to remove them from the watershed and contact their local game warden," the organization's Facebook post said. "They are an exotic, invasive species that can cause damage to our local ecosystems."

As for the story that pacu use those creepy human-looking teeth to crunch down on swimmers who dip in their Full Monty, New Jersey Department of Environmental Protection spokesperson Larry Hajna, told USA Today it's mostly a myth.

"I've been explaining to people that the fish is designed to eat fruits and nuts that are dropped into the river." Hajna said, commenting on another angler who netted a pacu in the Garden State in 2015. "That's why it has human-like teeth. Stories that it eats certain parts of the male anatomy are greatly exaggerated."

Catch of the Day? Fish Springs Into Shopping Cart