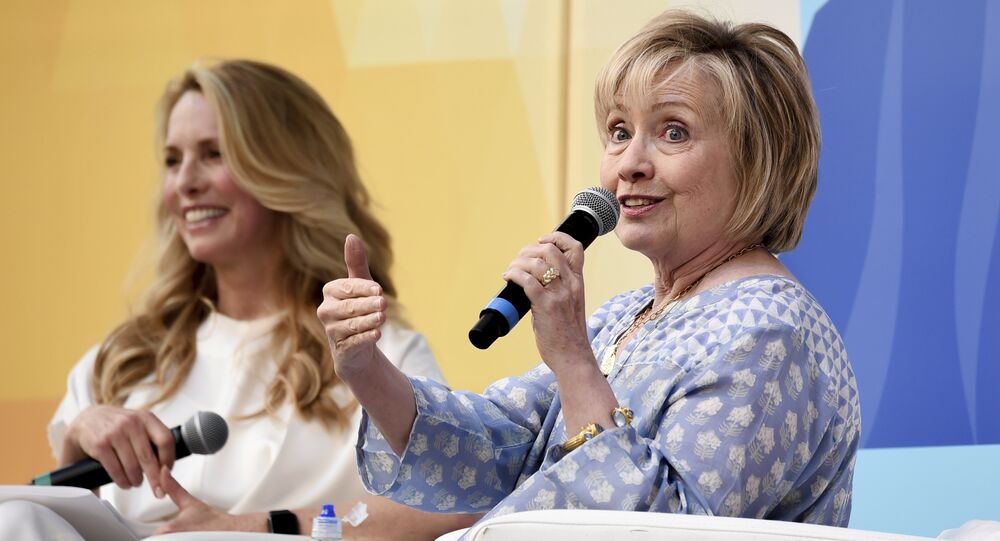 During an appearance at OZY Fest, a music, politics, ideas, and food festival, in New York City, Hillary Clinton has rebuked President Donald Trump for his performance at the Helsinki summit with Vladimir Putin earlier this week, warning that the US risked “losing friends and allies.”

Addressing this week’s burning topic, the 2016 Democratic candidate has once again brought up the issue of Russia’s alleged meddling in the US presidential election, having dismissed Trump’s handling of the matter in talks with Putin as “really distressing and alarming.”

“It was a very broad and a very successful cyberattack on our electoral system. The attack goes to the heart of our democracy. The great mystery is why the president has not spoken up for our country,” she said, adding that the purported attacks “should concern every single American.”

“It doesn’t seem our president even cares. […] Vladimir Putin has a very clear strategy. As a former KGB spy, he is quite adept at reading people and understands how to manipulate them. He [Trump] wants to be friends with Putin for reasons we are all trying to figure out. […] It’s alarming, and it is alarming on many, many levels,” she alleged.

Clinton also joined the ranks of those calling to clarify the content of the two-hour one-on-one conversation between the US and Russian presidents that preceded their joint presser in Helsinki.

“We don’t know what was said in the room between them. Putin is telling the world what was said but we hear crickets from the White House. Make no mistake this is a direct attack on our democracy. The idea that we are not sure where our own president stands is deeply distressing,” she elaborated.

The former secretary of state said that Trump was alienating allies, thus losing status and creating a “void,” which allows “adversaries” such as China to “step in to fill that void.”

“We’re losing friends and allies who are worried about what we might do next and we’re leaving vacuums for others to fill who may or may not have any of the same interests and goals that we have,” she said.

Her appearance at OZYFest couldn’t go unnoticed on social media, especially given the burning issue she had once again raised.

While many supported her views, suggesting that she would have made a “fine president”…

@HillaryClinton You look great! It must be a double edge sword for you that so many Americans didn't know the mess they got us into. Trump is an enemy of the people. He was long……before he became president. You are great!

Why can’t the republicans see this? They should never let trump meet Putin.

It is deeply disturbing. Hillary please keep speaking out. We need you so much!

You warned the American public — now is it true. What a fine president you would have made.

…others spoke out against her:

President Trump does nothing but speak up for country, Hillary, however, does nothing but tear down our country. She goes overseas and speaks badly about America. Who does she think she is kidding?

He has spoken up many times while @HillaryClinton was selling us out!

What’s most alarming is that Hillary Clinton is still on the loose and not in a federal penitentiary where she belongs.

You know what's disturbing and alarming?…the fact that Hillary controlled the DNC before she announced her candidacy, stole the nomination from Bernie, lost the general election to a game show host that SHE propped up and she claims "Russia" influenced the election.

Some reminded fellow users that Trump was not the only US representative to have met with Putin:

What should we call this meeting? pic.twitter.com/so4sgk1HaV

Other users opted to steer clear of politics, mocking her casual and relaxed clothing instead:

What in the hell is she wearing? Is she on furlow from the psych ward?

In a damn hospital gown with non slip shoes. And to think she was almost president. 😬😳

Did someone wake her up while she was sleeping and drive her here? She didn't even have time to change out of her pajamas

In her book, “What Happened,” Clinton came up with a wide-ranging list of reasons for her 2016 loss to Trump, mainly blaming Russia’s alleged interference, as well former FBI Director James Comey, who penned a letter to Congress announcing that he had resumed the investigation into her mishandling of sensitive material on her personal email server while she served as secretary of state.

During the joint press conference with Trump, President Putin reiterated that Russia hadn’t interfered in the US elections, and was not planning to ever do so.

“President Trump once again touched upon the issue of the so-called Russian meddling in the US election process. I had to repeat what I have said may times, including during personal meetings with the president [Trump]: Russia has never interfered and is not going to meddle in the US’ internal affairs, including in the election process,” Putin stressed.