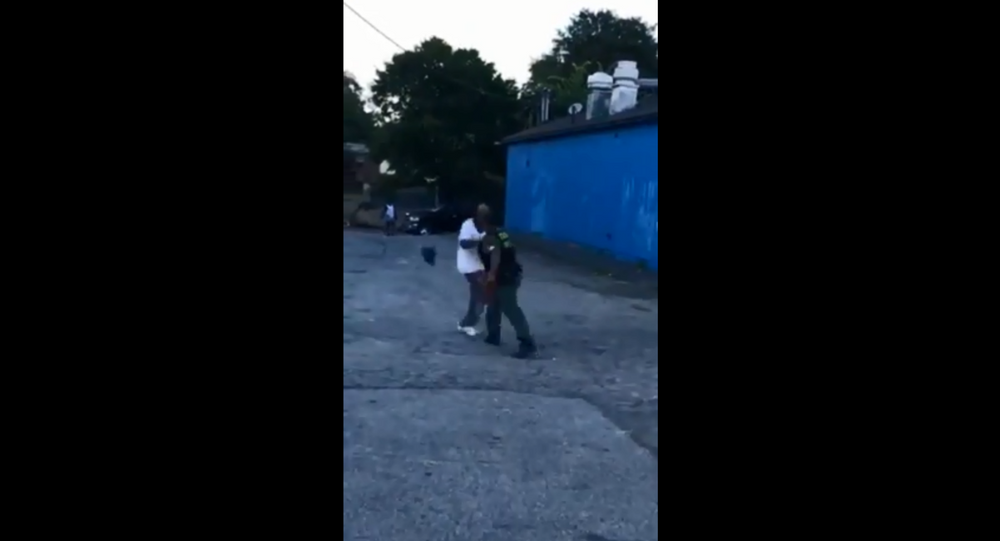 Georgia's Atlanta Police Department launched an investigation this week after a viral video showed one of its officers exchanging punches with a suspect and shoving his mother to the ground.

Footage of the July 9 incident was initially released to the Atlanta Journal Constitution on Friday by the department after an edited version of the recording appeared on social media the day prior.

The footage begins when 36-year-old Harold Barnwell, who is seen wearing a white shirt, takes a red satchel out of red Dodge Charger that was used in a in a separate incident that has called police to the area. As Barnwell is seen walking away with the bag, he is confronted by Sgt. Dominique Pattillo who orders him to drop the bag.

​As Pattillo moves closer in on Barnwell, ordering him to drop his bag, things took a turn for the worse when the officer retrieved the bag and "observed several bags of raw marijuana," the police report given to Sputnik states.

With Barnwell reportedly failing to comply with Pattillo's commands to place his hands behind his back, video footage shows Pattillo suddenly punching Barnwell and pulling out his taser. Barnwell's 53-year-old mother, Jennifer, is also seen trying to de-escalate the situation to no avail as Pattillo shoves her to the ground.

The footage ends as other officers arrive on the scene and break up the fight, which reportedly left Pattillo with a dislocated left pinky finger, the police report states. Both Harold and Jennifer were later arrested at the scene and are facing obstruction charges. Harold is also facing a possession of marijuana charge.

In response to the video, the department has released a statement indicating that they are aware of the incident and have launched an internal investigation into the matter.

"We are aware of the video and the complaint filed with our Office of Professional Standards," the statement reads. "We will investigate the matter and take appropriate action if it is determined any departmental policies or procedures were not followed."

Pattillo has been placed on administrative assignment, Atlanta police's Sgt. John Chafee, told Sputnik. The Barnwells have filed a complaint about the incident and have hired an attorney, Fox 5 Atlanta reported.

Atlanta Pays $2.6M to Contractors to Fix Hack Instead of $50K Bitcoin Ransom

Atlanta's Under Cyber Attack; Kim and Xi Meet in Beijing