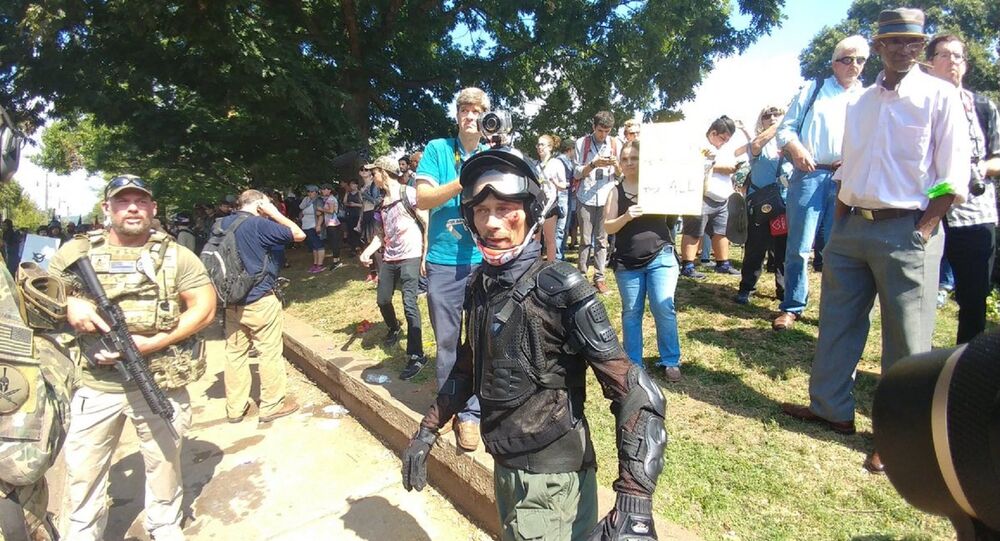 US Department of Homeland Security (DHS) Secretary Kirstjen Nielsen suggested “foreign influence” was what “aggressively pitted” neo-Nazis and anti-fascists (antifa) against one another in Charlottesville, Virginia, from August 11 to 12, 2017.

The Unite The Right rally in Charlottesville drew a huge number of counter protesters, with clashes erupting in the streets ahead of the rally, which had been called off by a police dispersal order prior. After a state of emergency was issued, the violence continued, culminating with a car attack against a group of peaceful left-wing marchers.

Activist Heather Heyer was killed and 19 others were wounded in the attack, which saw bodies flying through the air. A federal indictment against James Alex Fields says he "expressed support of the social and racial policies of Adolf Hitler and Nazi-era Germany, including the Holocaust," and deliberately drove his Dodge Challenger into the crowd.

The night prior, a large march of white nationalists at the University of Virginia chanted Nazi-era slogans such as "blood and soil" while carrying torches.

In the aftermath, US President Donald Trump gave an impromptu new conference about the violence, saying, "I think there is blame on both sides," a move seen by many as a covert endorsement of white supremacists, who were responsible for the overwhelming majority of violence in the town.

​NBC News correspondent Peter Alexander grilled Nielson on Thursday about the statement, asking whether it made her job more difficult, adding that white supremacist communities interpreted the remark as ‘he's got our back.'

The interview was conducted at the 2018 Aspen Security Forum, a conference of top law enforcement officials, experts and journalists hosted by the Aspen Institute think tank. FBI Director Christopher Wray, Director of National Intelligence Dan Coats, Department of Justice Deputy Attorney General Rod Rosenstein and many other big names were also in attendance.

"Whether it was foreign influence or different purposeful attempts to get both sides, if you will, aggressively pitted against each other," Nielsen said, it is DHS' role "to work with everyone to help communities understand what are the warning signs, what are the ways in which we can prepare."

Nielsen was likely referring to Russia when she said foreign influence could be behind the political tensions that set the table for violence in Charlottesville. In the same interview, Nielsen said that Russia "absolutely" meddled in the US 2016 presidential election. "I think what we've seen on the foreign influence side is they were attempting to intervene and cause chaos on both sides," she said, adding, "I haven't seen any evidence that the attempts to interfere in our election infrastructure was to favor a particular political party."

The US government previously accused Russia of creating Facebook events for dueling rallies and otherwise sewing division by exploiting internal flashpoints in the US.

On Tuesday, during Congressional testimony on "Examining the Content Filtering Practices of Social Media Giants," it was revealed that the Twitter, Facebook and YouTube representatives were unable to answer questions about the abuse of their platforms by other potentially hostile nations — China or North Korea, for example. "You're only here to condemn the Russians," Representative Louie Gohmert (R-TX), who posed the question, was forced to conclude.

The Unite The Right rally was planned in response to the town's decision to remove a statue honoring Confederate General Robert E. Lee. Groups from the left and the right — Americans — organized to show up, of their own volition.

Nielsen also avoided answering the question of whether Trump has made addressing the threat of white nationalists a priority, saying the president's priority is to crack down on "all forms of violence."

On February 1, 2017, Reuters reported that five people briefed on a Trump administration plan to revamp DHS' "Countering Violent Extremism" program said it may be renamed to "Countering Islamic Extremism" and it would no longer target "groups such as white supremacists."