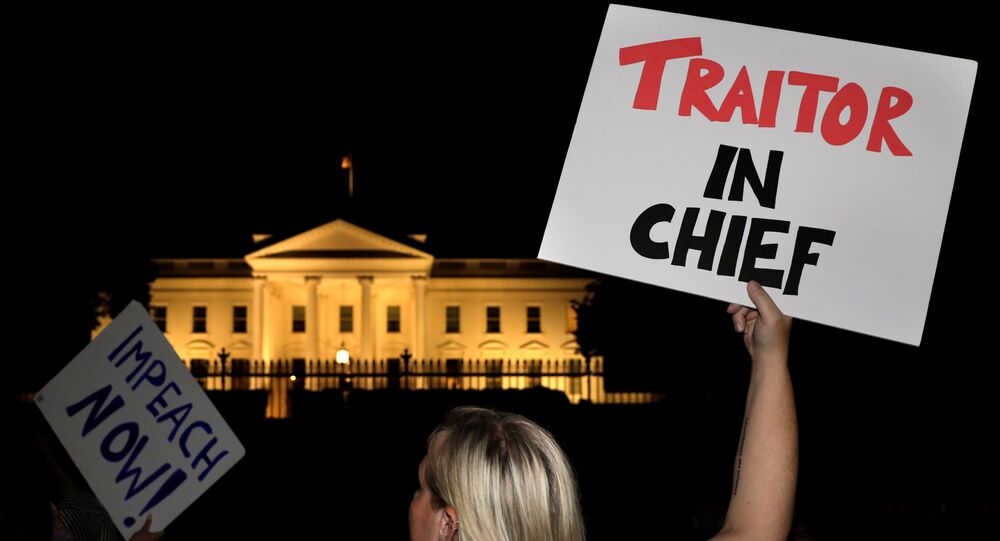 Several hundred protesters gathered outside the White House on Monday night, yelling "Traitor," "Putin's puppet," "Deport Trump" and other slogans after the president's helicopter touched down on the White House lawn.

Armed with makeshift cardboard signs calling Trump a "liar" and "traitor," as well as whistles and megaphones, protesters shouted and booed the president well into the night.

© AP Photo / J. Scott Applewhite
Ex-CIA Chief, US Officials Slam Trump's Presser With Putin as 'Treason,' 'Sign of Weakness'
The protests were apparently aimed at condemning Trump's Monday summit meeting with Russian President Vladimir Putin. Trump has been harshly criticized by a number of US lawmakers, as well as current and former US officials, for meeting with the Russian president. Ex-CIA chief John Brennan condemned the Putin-Trump joint press conference and called the US president's performance "treasonous." The condemnations come in the wake of continued claims of "collusion" between Trump and Russia, and an ongoing FBI probe, which Trump has dubbed a "witch hunt."

After nearly two years and multiple legal and congressional investigations, claims of Trump-Russia collusion remain unsubstantiated. Most recently, the US Justice Department indicted 12 suspected Russian intelligence officers on suspicion that they were involved in cyber attacks on the Democratic National Committee and Hillary Clinton's campaign. Asked to comment on the issue at the Helsinki summit, President Putin suggested that FBI officials come to Russia to probe the individuals they suspect of wrongdoing.

However, protesters saw things otherwise and took their grievances against Trump to the White House.

The demonstrators dubbed their protest #OccupyLafayettePark and promised to return Tuesday night. Some vowed to protest until Trump resigns.

Trump supporters, as well as those supporting a dialogue with Russia, disregarded the protests and derided the activists.

Another protest? You don’t say? 🤔Did they wear their pussyhats? I hope they remembered to picked up their trash this time.

Presidents Putin and Trump held a summit in Helsinki on Monday, covering issues including Syria, Ukraine, Iran, trade, the strategic nuclear balance, as well as allegations of Russian meddling in the 2016 presidential race. Trump said he wanted to restore good relations with Russia and blamed past problems on "Washington's own foolishness and stupidity." Putin called the talks with Trump's "very substantial," and praised Trump for being a "professional person" capable of listening to the other side's opinions, even while sticking to his own positions.