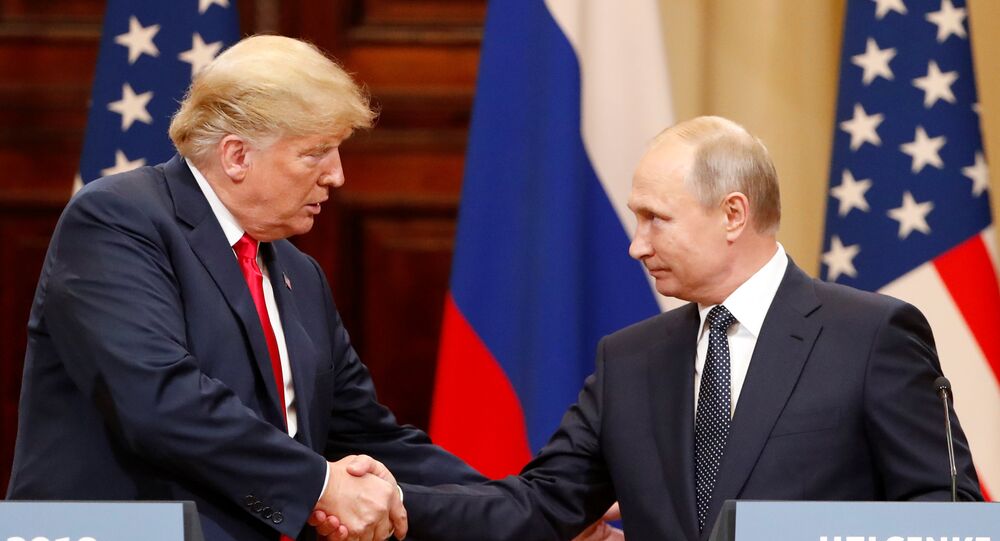 US President Donald Trump said Monday in an interview with Fox News that Special Counsel Robert Mueller's investigation has "driven a wedge between us and Russia".

"Maybe we've just knocked down that wedge, but it has driven a wedge and President Putin said that," Trump told Fox News in an interview following his summit with Russian President Vladimir Putin in Helsinki.

The historic summit took place three days after the US Justice Department has indicted 12 Russian intelligence officers on charges connected to alleged cyberattacks on the Democratic National Committee (DNC) and then Democratic presidential candidate Hillary Clinton's campaign during the 2016 presidential race.

© REUTERS / Kevin Lamarque
Ex-US Envoy to Russia: Moscow, Washington Relations Remain in 'Dangerous Shape'
On Monday, during a joint presser with US President Donald Trump in Helsinki, Vladimir Putin said that Robert Mueller could send an official request to question people named in the indictment. Employees of the Russian prosecutor's office and investigative authorities can conduct this questioning and then send relevant materials to the United States.

Vladimir Putin also stressed that Russian authorities can allow official US representatives, including this commission headed by Mueller, to be present at the questioning sessions.

Donald Trump told Fox News that he was "fascinated" by Vladimir Putin's proposal, however, US President doubted such a suggestion, saying that the Robert Mueller's team "probably won't want to go."

"They have a treaty where they work together with the United States … And his prosecutors would prosecute it. And he said that Robert Mueller’s people could go with them but they probably won’t want to," Trump told Fox News on Monday.

Donald Trump said that during the summit with Russian President Vladimir Putin in Helsinki, the sides reached a number of "good conclusions."

"We discussed so many different things, including nuclear, including war and peace, including economic, Syria, Ukraine … At the end of this meeting, I think we really came to a lot of good conclusions. [Among them] A really good conclusion for Israel," Trump told Fox News on Monday.

© Sputnik / Sergei Guneev
Russiagate Promoters Forget Lessons of Iraq - Writer Ejected from Trump-Putin Presser
Moreover, US President Donald Trump said in an interview that the positions of the United States and Russia on Syria are quite similar, and the two countries' approaches are getting closer.

"On Syria, we are getting very close. I think it’s becoming a humanitarian situation … So, I really think we are not very far apart on Syria," Trump told Fox News on Monday.

In addition, Donald Trump said that the preservation of the nuclear deal with Iran is beneficial for Moscow, but disadvantageous for Washington and the rest of the world.

"I do think that on Iran, he [Putin] probably would have liked to keep the [Iranian nuclear] deal in place, because it’s good for Russia, you know, they do business with Iran … But it’s not good for this country [US], and it’s ultimately not good for the world," Trump told Fox News on Monday.