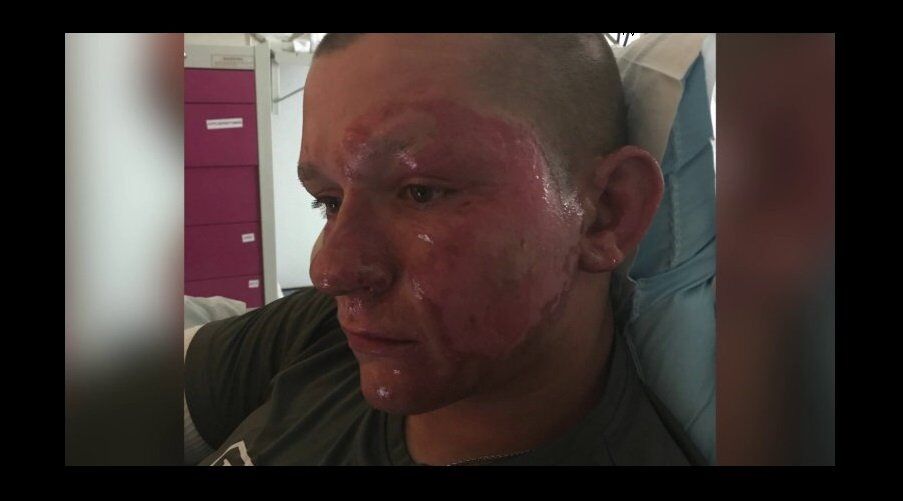 ‘His Face Was Peeling Off’: US Teen Hospitalized After Touching Giant Hogweed

A Virginia teenager was hospitalized earlier this week with second and third-degree burns after touching a giant hogweed plant, an invasive species whose sap causes one to become allergic to sunlight.

Alex Childress of Spotsylvania was doing his summer landscaping job Tuesday when he came across a tall weed with purple spots and a wide crown of white flowers.

"We were working outside a factory and I snipped down a bush and it fell and touched my face," Childress told NBC 12. "I didn't pay any mind to it because I do it all the time."

However, this wasn't just some errant plant, it was a giant hogweed bush, and Childress had its sap all over him, which causes a condition called "photodermatitis," effectively making one allergic to the sun's ultraviolet rays.

Childress continued his work, but started to feel the weight of the beating summer sun and feeling like he had gotten a sunburn, went home to clean up.

"When he got home he got into the shower and the skin on his face was basically peeling away and peeling off," Alex's father, Justin Childress, said.

Alex Childress, 17, has burns on his face and arm because of the clear watery sap from the plant. He was working with a landscape crew when he cut the plant down, and it brushed against his face. #RVAnews #RVA #NBC12 pic.twitter.com/6MHjzQsQ3M

​When Alex's mother returned home that evening, she determined that Alex's injuries were severe enough to require medical attention. She first tried to take him to the Spotsylvania Regional Medical Center, but they in turn sent him to the Burn Center at the Virginia Commonwealth University Medical Center in Richmond, where Alex's mother works as a nurse, CBS affiliate WTVR reported.

"It's a traumatic experience, but Alex is a tough kid," Justin said. "I just don't say it because he's my kid, but he's one of the toughest kids that I've ever seen."

Childress was due to begin his studies at Virginia Tech next month, where he got a full-ride scholarship and intended to join the Corps of Cadets. That future is now imperiled by his injuries, as his father said he will need a medical waiver for physical activity.

Childress's mother told NBC they were discharged from the hospital at 5:45 p.m. Thursday.

A Spotsylvania teen is recovering at @VCUHealth after coming in contact with the dangerous Giant Hogweed plant earlier this week. #RVAnews #RVA #NBC12 pic.twitter.com/E2BU4zMN9e

​The plant that burned Childress, giant hogweed, is a member of the parsley family native to the Caucasus mountains that was introduced to the US in the early 20th century as an ornamental plant. Since then it has escaped into the wild, where it grows in rich, moist soils along roadsides, stream banks, and disturbed areas, according to the Natural Resources Conservation Service.

The plant can grow 4-5 meters tall, has purple spotted leaves and a giant crown of white flowers. When fully grown it is hard to miss, but when shorter it could easily be mistaken for innocuous weeds like Queen Anne's lace.

The giant hogweed plant produces a clear, watery sap that causes swelling, severe blistering, and painful dermatitis upon exposure to ultraviolet light, most commonly from the sun. Because of this, photodermatitis is commonly termed a "sun allergy" and is distinct from a sunburn. The effects can persist for years after contact, and if the sap gets in the eyes it can cause permanent blindness.

The entire plant is dangerous and all contact with giant hogweed must be avoided. Plant removal can only be done by trained, protected experts.

This Chocolate Bar Can Burn