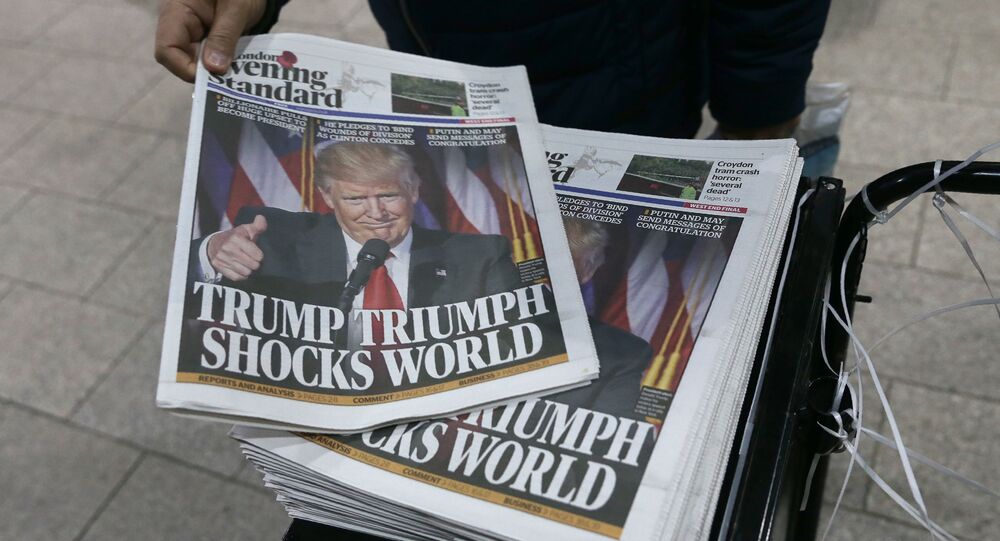 "Today the grand jury in the District of Columbia returned an indictment presented by the Special Counsel's Office. The indictment charges 12 Russian military officers by name. According to the allegations in the indictment, the defendants work for two units of the Main Intelligence Directorate of the Russian General Staff known as the GRU," Rosenstein told reporters.

"Eleven of the defendants are charged with conspiring to hack into computers, steal documents, and release those documents with the intent to interfere in the election," he stated.

© AP Photo / Doug Mills
'Agent Trumpsky': Twitter Explodes as US Media 'Reveals' POTUS was 'Soviet Mole'
According to the deputy attorney general, Russian intelligence hacked the election board and stole the information of 500,000 voters, yet it did not affect the count or outcome of the 2016 US election.

"One of those defendants and a 12th Russian are charged with conspiring to infiltrate computers of organizations involved in administering elections," he emphasized.

The Russian hackers used DCLeaks and Gucifer 2.0 to extract and disseminate the information under the direction of GRU, according to Rosenstein.

Rosenstein said that he informed US President Donald Trump about the indictment before Friday's announcement.

"I briefed President Trump about these allegations earlier this week," Rosenstein told reporters. "The President is fully aware of the Department's actions today."

The indictment of the Russians does not contain allegations that any US national was a knowing participant in the unlawful activities, US Deputy Attorney General Rod Rosenstein told reporters.

"There is no allegation in this indictment that any American citizen was a knowing participant in the alleged unlawful activity or knew they were communicating with Russian intelligence officers," Rosenstein said.

Meanwhile, the White House has denied that there is any connection between charges against the 12 Russians and allegations of individuals in the Trump campaign being aware of the hacking.

"Today's charges include no allegations of knowing involvement by anyone on the campaign and no allegations that the alleged hacking affected the election result. This is consistent with what we have been saying all along," the statement said, as quoted in a pool report.

© Sputnik / Alexey Malgavko
US Official Warns Against Blaming All Election Hacks on Russia, Criminals Also Active
In October last year, the Department of Homeland Security and the office of the Director of National Intelligence of the United States announced the alleged involvement of the Russian government in hacking attacks committed in 2016 against political organizations in the United States.

Later, the CIA, through the media, accused Russia of hacking Democratic Party computer servers in order to help Donald Trump, who won the presidential election on November 8, 2016.

© AP Photo / Andrew Harnik
Manafort Asks Court to Move Trial Venue to Roanoke, Virginia
Russian presidential aide Yury Ushakov said Friday said that people who oppose improving relations between Russia and the United States should not be allowed to ever speculate on the issue of Moscow's alleged interference in the 2016 US presidential election and Russian President Vladimir Putin would mention this at a meeting with his US counterpart Donald Trump on Monday.

"It seems to us that we should not allow those who oppose improving US-Russia relations to constantly speculate on this harmful and, most importantly, artificially propped up topic," Ushakov told reporters, noting that Putin would reiterate this during his meeting with Trump.

He noted that Russia was ready to consider facts proving Moscow's interference in the US election if the US side has them.

"This could be done, for example, within the framework of the joint working group on cybersecurity, which our president and Trump agreed to create at the meeting in Hamburg, but so far this idea has not been implemented," the Kremlin aide said.

© AP Photo / Matt Rourke
Manafort Transferred to Alexandria Detention Center Near DC Ahead of Trial
Ushakov reiterated that Russia had never interfered in the internal affairs of other states, noting that it was particularly important to stress this amid speculations that had already started emerging ahead of the US midterm elections set for November.

Since Trump won the 2016 presidential election, US authorities have been investigating at various levels the allegations of collusion between Trump's campaign team and Russia, claiming that Moscow had meddled in the election process to help Trump win against then-Democratic nominee Hillary Clinton.

Russian authorities have repeatedly denied all allegations as groundless.