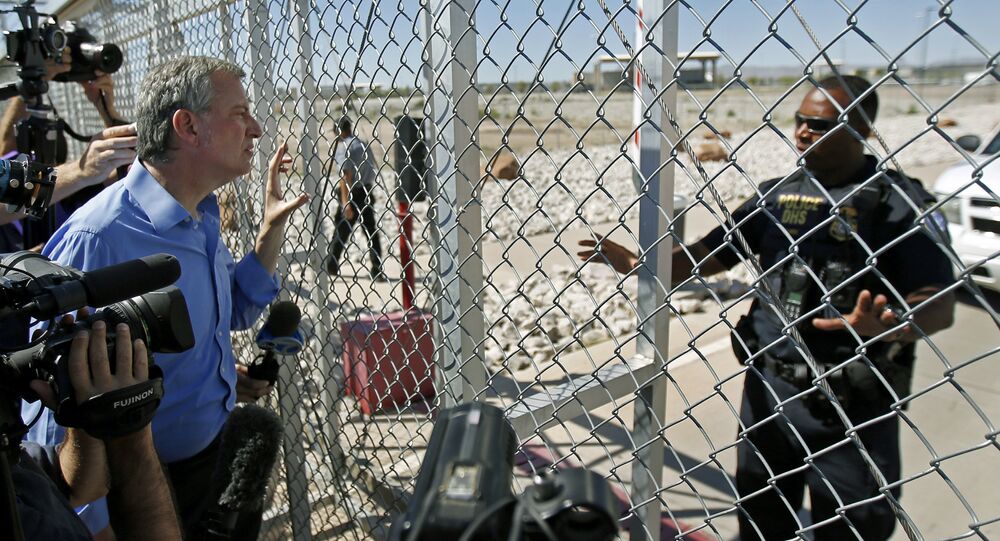 US Customs and Border Patrol has accused New York City Mayor Bill de Blasio of crossing into Mexico from the US in a manner that violated both US and Mexican law.

The allegation was uncovered in a June 25 letter obtained by AP and published by the media outlet Wednesday. De Blasio roundly rejected the allegation as "absolutely ridiculous" during a news conference Wednesday. The mayor further characterized the charge as a smokescreen by the administration of US President Donald Trump to distract from the debate on immigration and the policy of separating families.

The mayor has criticized Trump over his immigration policies and New York City is a sanctuary city, although pro-immigration activists and attorneys say the label means little.

As national fury mounted over Trump's "zero tolerance" policy, which increased the number of families separated after illegally entering into the United States, de Blasio and approximately 20 other mayors travelled to Texas in an attempt to visit an immigrant children detention facility.

The group arrived at the Texas border on June 21, one day after Trump's executive order "stopped" family separations, according to AP.

When they were not allowed to enter the facility, de Blasio and his NYPD bodyguards went into Mexico and crossed into the US to get a better view of the building, AP reported.

The letter states that a CBP officer saw the group taking photographs and asked them if anyone from the agency or public affairs was there to authorize their presence. An NYPD inspector answered in the negative, and when the agent asked how they got there, they pointed in the direction of Mexico.

The agent informed the party that they crossed the border illegally and asked them to stay put while he got ahold of a supervisor, taking them to an official crossing to be inspected, as is required by law, according to the letter. They declined and walk backed to their vehicles, driving back to Mexico. Three hours later, they entered back into the US by car at a port of entry.

"[This] is another way to distract [the American people] from an inhumane policy," the mayor said at a news conference. Both he and his spokesperson Eric Phillips have roundly rejected the allegation as a means of attacking the mayor for his advocacy for separated families.

"While there, we were told where the border line was and we respected it. We came back the exact same way, both times showed passports and went through with the approval of the agents at the entry point," de Blasio said. "At no point did we disregard any of the instructions from the federal authorities."

Hillary Clinton May Run for NYC Mayor, Against de Blasio