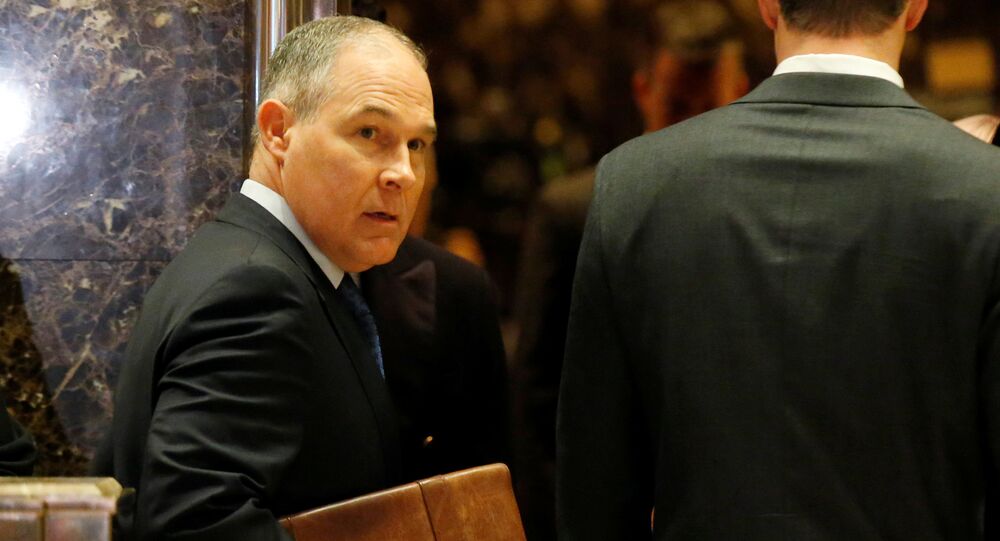 US President Donald Trump announced Thursday via Twitter that EPA Administrator Scott Pruitt has resigned from his post.

"I have accepted the resignation of Scott Pruitt as the Administrator of the Environmental Protection Agency," Trump tweeted. "Within the Agency Scott has done an outstanding job, and I will always be thankful to him for this."

Trump added that Andrew Wheeler, EPA deputy administrator, will be taking up the reins. Wheeler was confirmed in his position by the Senate in April.

Pruitt's resignation comes after two US members of Congress called for an investigation into his use of secret calendars to hide meetings with controversial figures, among them Cardinal George Pell, the Vatican's third-highest-ranking official, who has been hit with sexual abuse charges. Pruitt also reportedly attended a dinner at the Trump International Hotel in Washington, DC, that was hosted by Joseph Craft, the chief executive of coal producer Alliance Resources Partners, Think Progress reported.

​According to the Huffington Post, if an investigation into the secret calendars was launched, it would be the 19th federal probe into the 50-year-old Kentucky native.

The resignation also follows a local Washington, DC, woman's confrontation of Pruitt at a restaurant, during which she urged him to resign before his scandals pushed him out the door.

Of other various scandals that brought Pruitt under a microscope, there was the time he was found to be using taxpayer money to the tune of at least $105,000 to fund his first-class travel arrangements. Another time included allegations that he used EPA staff members and his security detail for personal errands such as shopping and finding jobs for his wife, Marlyn, The Hill reported. The cost of Pruitt's unprecedented security detail itself was also under investigation, as it was found he'd racked up more than $3 million in security expenses in his first year, far more than previous EPA heads, AP reported in April.

Pruitt assumed his role as the 14th administrator of the environmental agency in February 2017.

Later in the day, Trump told reporters aboard Air Force One that Pruitt had resigned of his own accord and there was "no final straw." Pruitt stated in his resignation letter that the "unrelenting attacks" on him and his family were behind his decision to step down.