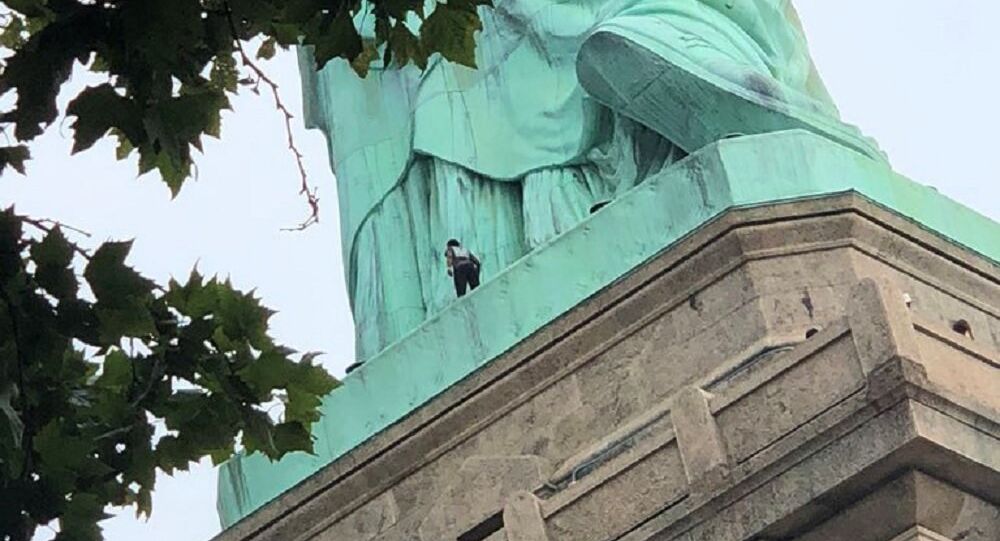 A woman sitting on the robes of the Statue of Liberty for three hours on the 4th of July to protest the separation of migrant families has been taken into custody after a confrontation with police.

The woman, who has been identified as Therese Patricia Okoumou, stated that she would not get down until "all children were released," as she reportedly protested against President Trump's zero-tolerance policy on immigration.

The New York police tried to persuade the protester to come down, but she refused.

"At first, she wasn't friendly with us, but we took the time to get a rapport with her so that took a while," said Officer Brian Glacken.

A source in one New York police station said that about 16 police officers had taken part in the operation to remove the woman from the statue.

Today, Therese Patricia Okoumou, a Congolese immigrant, scaled the Statue of Liberty and said she would not be moved until all the children detained from ICE were released.

“We who believe in freedom cannot rest.” Ella taught us. #AbolishICE (Photo via AJ+) pic.twitter.com/bu4uEKR4PQ

Police officers then helped the woman get down from the pedestal of the statue. After that, she was taken into custody.

A black woman is climbing the Statue of Liberty in protest on July 4. #HappyFourth pic.twitter.com/YyspzPX6wx

In recent weeks the issue of family separation has grown into a major crisis in the United States.

© REUTERS / Leah Millis
WATCH: Protest Against Trump's Immigration Policies Held in Washington, DC
According to the "zero tolerance" policy that was announced in April, the US authorities are obligated to detain families illegally crossing the border, after which parents are sent to adult detention centers and children are housed in special detention centers since they are not subject to criminal liability.

From May to early June, more than 2,000 children were detained.

On June 30, US President Donald Trump, against the backdrop of massive criticism, again called for the deportation of illegal migrants without trial and said American laws that call for a judicial decision to expel foreigners "the dumbest anywhere in the world."