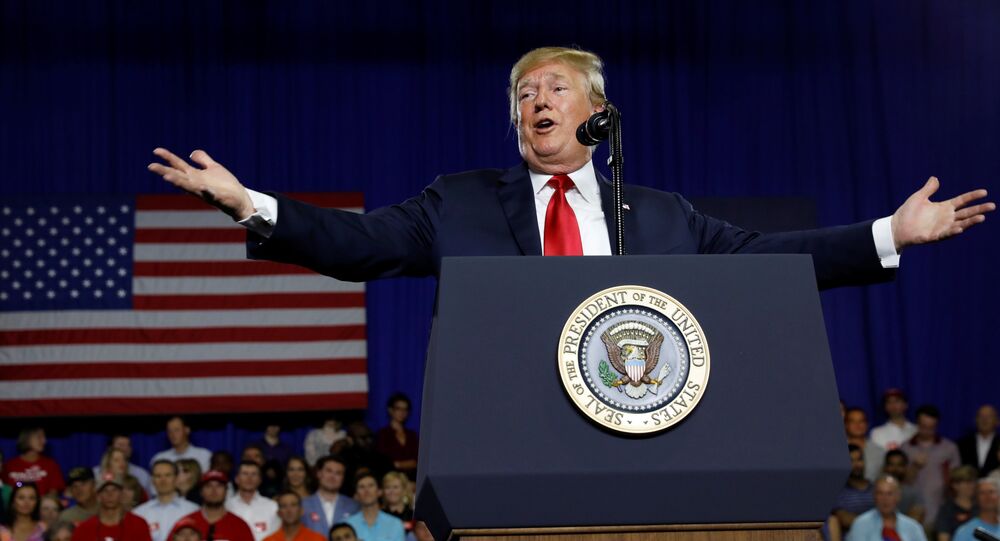 'We Are F**ked': Are Trump's Supreme Court Nominations Perceived With Bias?

The resignation of Supreme Court Justice Anthony Kennedy has given Donald Trump's team an opportunity to pick a replacement to one of the most important bodies in the US, but the appointment process may once again be hindered by opposition from the Democrats and negative media coverage.

Donald Trump hasn't made up his mind about whom to appoint to the position of Supreme Court justice yet, but some in the media have already decided how they will perceive it.

A vast amount of warnings have been making headlines across the US, ranging from relatively mild in tone, claiming that Trump's decision will "echo for generations," to outright apocalyptic, such as the cover of the newspaper New York Daily News.

Some have already started speculating about how Trump's second Supreme Court nomination could "tip the balance" in the country's highest court. Others, such as The Huffington Post, have gone as far as questioning the fate of previous Supreme Court rulings, such as the constitutional right to abortion, suggesting that the court's 1973 decision in the case Roe v. Wade could now be overturned.

And there were those, who had an extremely pessimistic outlook at the prospect of Trump appointing another associate justice. For instance, The Los Angeles Times mulled the possibility of the Supreme Court shifting "sharply to the right" with this single appointment, while a columnist at the blogging platform Medium suggested that the US could lose "the balance of American justice."

READ MORE: Which One of These Six Will Donald Trump Pick to Fill US Supreme Court Vacancy?

Such strong focus by the media on Trump's nominees to the Supreme Court is nothing new. His previous nominee to the high court, judge from the US Court of Appeals for the Tenth Circuit, Neil Gorsuch, also received a lot of attention. Some media suggested that with Trump's appointment, the Supreme Court had "just died" and forecasted dramatic changes in US politics, claiming that Gorsuch would have a "major impact on all three branches of government."

This second nomination means that Donald Trump will have equaled the total number of justices that his predecessor was able to appoint to the Supreme Court. However, it seems that the media took considerably less interest in Obama's two picks for Supreme Court justices — not to mention that there were no "doomsday" pronouncements to speak of prior to those appointments.

READ MORE: Judging the Judges: Why US Supreme Court Selection is a Political Beauty Contest

In August 2009, when Obama nominated Judge of the US Court of Appeals for the Second Circuit Sonia Sotomayor to the post of associate justice, media headlines focused primarily on praising her as the "first Hispanic justice in Supreme Court history," recalling her "focus, determination" during her studies at school. A Huffington Post columnist supported Obama's choice as one that made the Supreme Court "better reflect the diversity of America." The New Yorker magazine noted in one of its own articles that Sotomayor was "the only member of the Court with direct, firsthand exposure to the way that law is dispensed in this country."

At the same time, little attention was given to allegations of "racism" on her part, raised by then-Speaker of the US House of Representatives Newt Gingrich. The accusations came in response to Sotomayor's own words that "a wise Latina woman" would more often "reach a better conclusion than a white male." Still, mainstream media preferred to publish commentaries defending her, claiming that her words were taken out of context.

A similar situation occured with Solicitor General of the US Elena Kagan's appointment to the position of associate justice of the Supreme Court by Obama in May 2010. However, that at time media rolled out more moderate headlines, focusing on Obama's reference to the "temperament of Kagan" and her unusual background — as she had never worked as a judge. The latter "weak point" was largely glossed over in mainstream media, instead focusing on her "deep legal knowledge" from her time working as a dean at Harvard Law School. Nor did the media significantly cover the fact that Kagan and Obama had known each other well for over a decade, were maybe even friends prior to her nomination.

Trump will be appointing a new associate justice to the US Supreme Court after 81-year-old Anthony Kennedy announced his resignation on June 27. The candidate forwarded by Trump will be reviewed and voted for by the Senate, requiring over 60 voices in favor for candidate to succeed. With Trump's previous appointee to the Supreme Court, Republicans were forced to resort to a "nuclear option" that lowered that bar to 51 votes, due to Democrats filibustering the appointment of Neil Gorsuch.

It is unclear for now, whether the Trump team will come up with a candidate in the near future or will wait till the November mid-term elections, hoping for a better makeup in the Senate for a smoother appointment. Last time the vacant post in the Supreme Court remained unoccupied for almost a year.