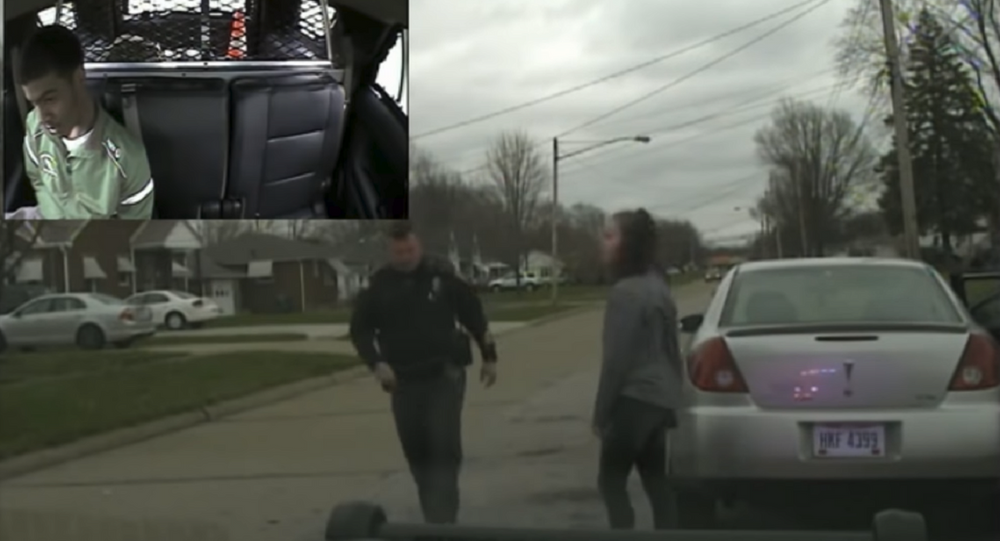 A white police officer in Lorain, Ohio, was fired in May after an internal departmental investigation found that he had abused his authority. Recently surfaced video footage shows him pulling over his daughter’s boyfriend and detaining the two of them.

Officer John Kovach, a 25-year veteran of the force, was fired on May 11 for violating department policies during an April 16 encounter with his daughter, her boyfriend and two of their friends.

Those violations included pulling the car over, failing to alert anyone of the stop, threatening to arrest the mother of two of the passengers, being untruthful to superiors, threatening to make up charges against his daughter's boyfriend and abusing his police power to track down his daughter.

The dashcam video, recently made public and posted by the The Lorain Chronicle Telegram Wednesday, begins with Kovach's cruiser apparently waiting outside of a home he believed his daughter to be staying at. After a silver car passes by, Kovach pulls it over and he exits his cruiser.

​​He circles the car and comes around to the driver, her daughter's boyfriend, and points at him, saying, "You can get out."

"You're going jail," Kovach tells him. Coleman asks again and Kovach doesn't give him a straightforward answer. As the boy complies, Kovach tells him, "Have a seat in my car. We'll make sh*t up as we go."

Kovach asks him whether he has any weapons or drugs on him, and then "what's that?"

"Obviously it's a bottle opener," Coleman tells him.

Kovach tells him not to "get smart, before I do something to you — even more."

The mother of two of the passengers, neither Coleman nor Kovach's daughter, then approaches the officer. He asks the woman, Gloria Morales, whether his daughter is in her house, having yet to realize that she's in the backseat of the car. She tells him no and gives him permission to search the house. He tells her that if she's lying he'll put her in jail.

Kovach says that Morales' daughter was not wearing a seatbelt, telling the woman it'll cost her $200. Morales then tells him to come back with a search warrant before searching her house. As Morales continues to argue about the officer's actions "on department time," Kovach threatens her with jail for "being disorderly." After he gives her a "last warning" to stop obstructing him, she threatens to call 911, and he again threatens to arrest her if she does. However, he eventually lets them go.

© AP Photo / Nick Wass
‘He Thought I Was a Dealer:’ Cop Pulls Over US Football Player, Asks if He’s in Gang

That's when Kovach noticed his daughter, Katlyn, in the back seat. "She's in the car," he utters, to apparently nobody in particular.

Kovach then ordered his daughter to exit the car and let everyone else leave including Coleman, who was in his police cruiser. As he shoves his daughter in, she screams, "Why are you taking me? You have to give me a reason, by law!"

The officer tells Coleman that his daughter was suicidal and that's why he was taking her, which she repeatedly denies. Later, he told fellow officers that his ex-wife, Katlyn's mother, had alerted him to a Facebook post by Coleman alluding to pimping Katlyn out for money, but the woman denied knowledge of such a post in an interview with police.

Kovach told officers that Coleman was speeding and nearly hit his cruiser, but both the newly public video and a police investigation determined otherwise.

During the footage, dispatch officers attempted to call Kovach to a road rage incident, but the officer never responded.

Morales did eventually call 911 after the encounter. Police Lieutenant Dan Smith responded and spoke with Coleman and his mother. Coleman told him that Kovach had threatened to issue warrants against him a week prior and to contact his US Army recruiter to block him from enlisting.

Because the chief of the department cannot discipline an officer with anything harsher than three days of suspension, Safety-Service Director Dan Given was handed control of the situation. Given, a commanding officer, said, "These actions are not acceptable for members of our police department and we felt it warranted immediate dismissal," according to the Lorain Chronicle.

The president of the local Fraternal Order of Police is appealing Kovach's firing, claiming that Kovach did not show gross misconduct and the department violated his contract by firing him. The matter will be arbitrated on in September.

The local county prosecutor is also reviewing the case for potential criminal charges.