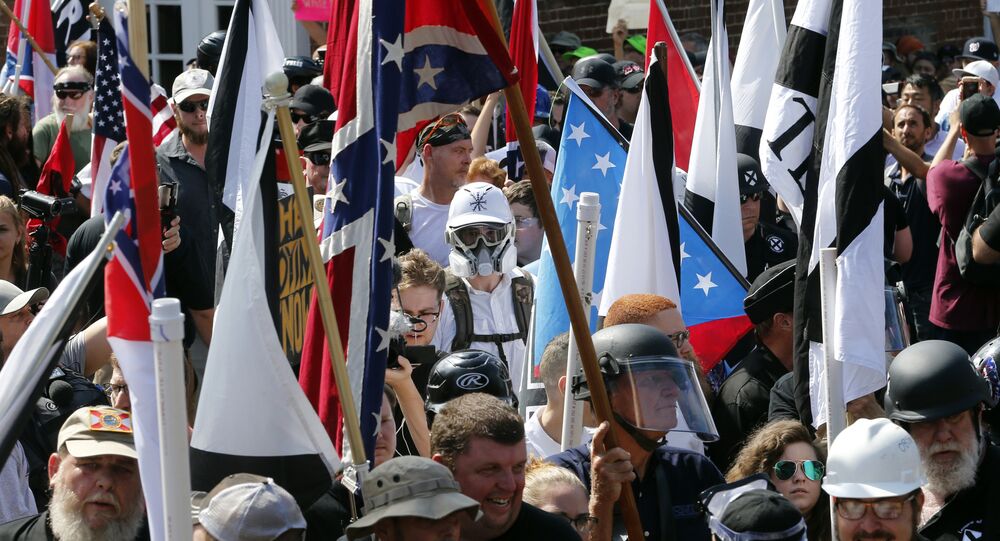 A US Marine and member of the notoriously violent US neo-Nazi organization Atomwaffen Division who participated in the “Unite The Right” rally in Charlottesville in August 2017 was sentenced to 28 days in confinement and demoted following a guilty finding in his court martial Monday.

Lance Corporal Vasillios Pistolis attacked a protester in Charlottesville in 2017 and is a member of a paramilitary-style neo-Nazi organization training for guerilla warfare for a "coming race war" in the United States, Sputnik News previously reported.

Pistolis was charged with failure to obey an order or regulation and making a false official statement under the Uniform Code of Military Justice, according to 1st Lieutenant Samir J Glenn-Roundtree, who spoke with Task & Purpose on Monday. It's unclear exactly which actions Pistolis was charged for.

He was punished for those offenses with 28 days in confinement and a reduction of two ranks, down to a private, and his pay was cut by two thirds for one month. He's also been afforded one week to submit a request for clemency.

At least three other members of Atomwaffen have been identified as active members of the US military, but it isn't clear how they're being dealt with currently.

Two other Marines from Camp Lejeune in North Carolina, where Pistolis is stationed as a member of the 2nd Marines Logistic Group, were arrested in May 2017 — prior to the neo-Nazi rally in Charlottesville — after flying pro-Confederate banners at a different white supremacist rally. One was administratively separated from the Marine Corps and the other was discharged, according to officials who spoke with Task & Purpose.

Atomwaffen's ideology is distinct from most pro-Confederate groups as its members advocate for the overthrow of the US government, the ethnic cleansing of non-whites from the US, and the installation of a National Socialist state along the lines of Nazi Germany. Members have been of the group have been accused of five murders in the US since May 2017.