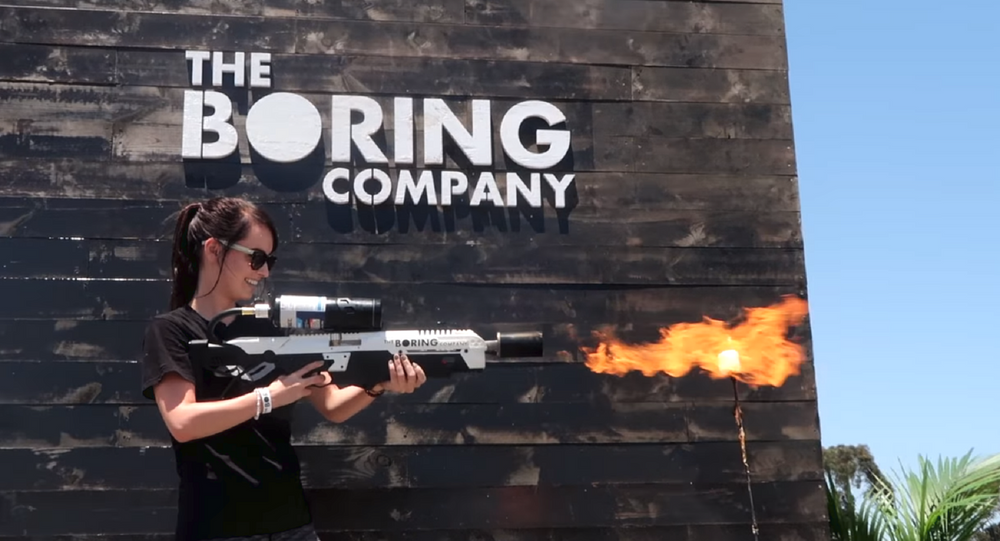 Billionaire space exploration hobbyist and business magnate Elon Musk held the hottest party in Los Angeles over the weekend. At the event, he distributed the first 1,000 of his Not a Flamethrowers to buyers, live-tweeting the whole thing.

Elon Musk's Boring Company quickly sold out of its 20,000 (absolutely) flamethrowers in less than a week back in January. (Shortly after the sale was announced, the items were dubbed ‘Not a Flamethrower' in order to circumvent shipping regulations against items called flamethrowers.) On Saturday, the company distributed the first 1,000 of them in LA.

Musks' official Twitter account and the account for the Boring Company together tweeted a total of 16 photos from the event, mostly of their customers testing out the new product. Some people roasted marshmallows, others came dressed as Mariachis. One couple even brought their baby to the flamethrower distribution event because hey, what isn't a family affair these days?

"Nothing makes your baby more zen than a few gentle puffs of a TBC Flamethrower," Musk Tweeted in the afternoon, raising some eyebrows and eliciting responses like: "America is terrifying," "this ends badly," "How is this legal?" "What the dystopian f*****ck??" and "Which stage of capitalism is lighting a baby on fire?"

Amid an ongoing national debate over gun reform and the Second Amendment, some took issue with the fact that such dangerous machines were sold for a mere $500 by the Boring Company, which did not require a background check of would-be flamethrower owners.

​While it may seem like just fun and games to some, people are already burning things down that should probably be avoided, and using the for-sure flamethrowers in ways that violate the terms of their purchase. Even Musk has suggested doing things with them that violate the agreement.

In a Doctor Seuss-style poem, the company made buyers of Not a Flamethrower promise not to ‘point it at their spouse.' It also has customers agreeing to "not use this in a house," although Musk himself tweeted that it's obviously the "best way to light your fireplace."

Another part of the agreement absolving Musk's company from liabilities from customers' behavior "no matter how genius or stupid" included exemptions for such acts as "setting things on fire," and "smoking near the not-a-flamethrower." This guy managed to do both of those in one video.

Meanwhile, YouTube vlogger Justine Ezarik accidently burned down parts of her backyard while filming videos demonstrating how to cook with the machine. Others have tried to cook everything from steaks to Crème brûlée with them.