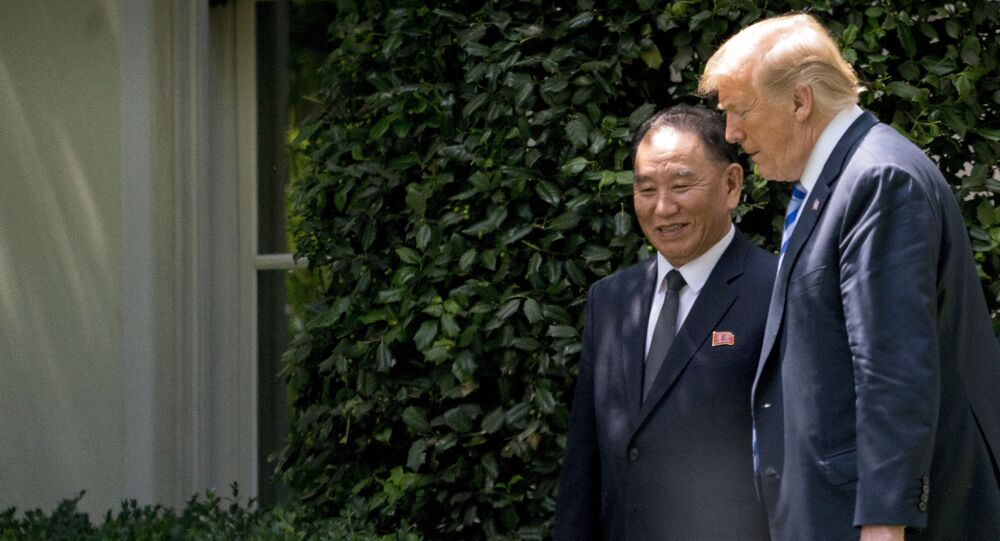 WASHINGTON (Sputnik) - The United States is continuing the maximum pressure campaign on North Korea, but it is better not to use this term in advance of the upcoming bilateral summit in Singapore, US President Donald Trump said in a press conference on Thursday.

"Maximum pressure is absolutely in effect. We don't use the term anymore because we are going into a friendly negotiation. Perhaps after that negotiation, I will be using it again," Trump told reporters in a joint press conference with Japanese Prime Minister Shinzo Abe.

© AP Photo / Lee Jin-man
Trump-Kim Summit Could Become Fiasco Without Concrete Denuclearization Timeline - Analysts
Trump stressed using the phrase again would mean the discussions with Kim at the summit did not go well. The US president explained he has a massive list of about 300 possible sanctions against North Korea, but he decided not to place the information at this time.

Trump also said he may look at additional sanctions after the summit, but expressed hope more punitive measures will not be necessary.

Meanwhile, Donald Trump said in a press briefing on Thursday that the letter he received from North Korean leader Kim Jong-un contained only a greeting, but a nice one that was greatly appreciated.

© Sputnik / Iliya Pitalev
Trump-Kim Summit May Provoke Influx of Chinese Investment to N Korea – Reports
Trump added that he might try to get approval to release the letter.

Moreover, Trump told reporters on Thursday he will raise the issue of Japanese citizens abducted by Pyongyang during a summit with North Korean Chairman Kim Jong-un.

"He talked about it long and hard and passionately. And I will follow his wishes, and we will be discussing that with North Korea, absolutely," Trump said during a joint press conference with Japanese Prime Minister Shinzo Abe.

Abe said Trump understands the abduction issue more than any other world leader.

Japan's premier also expressed hope that the US-North Korea meeting in Singapore would be a great success and would make progress toward the release of Japanese citizens snatched by Pyongyang.

Trump said he discussed the issue with Abe in detail and promised to keep in close communication with him on the matter.

However, just a few weeks ago Trump said China needed to continue being strong on the border with North Korea because recently it had become "much more porous and more has been filtering in."

Trump also said last month that he wanted the border to remain closed until an agreement is signed with North Korea.

On Monday, White House spokesperson Sarah Huckabee Sanders confirmed that the summit between Trump and Kim would take place in Singapore at 9:00 a.m. Singapore time (13:00 GMT) on June 12.