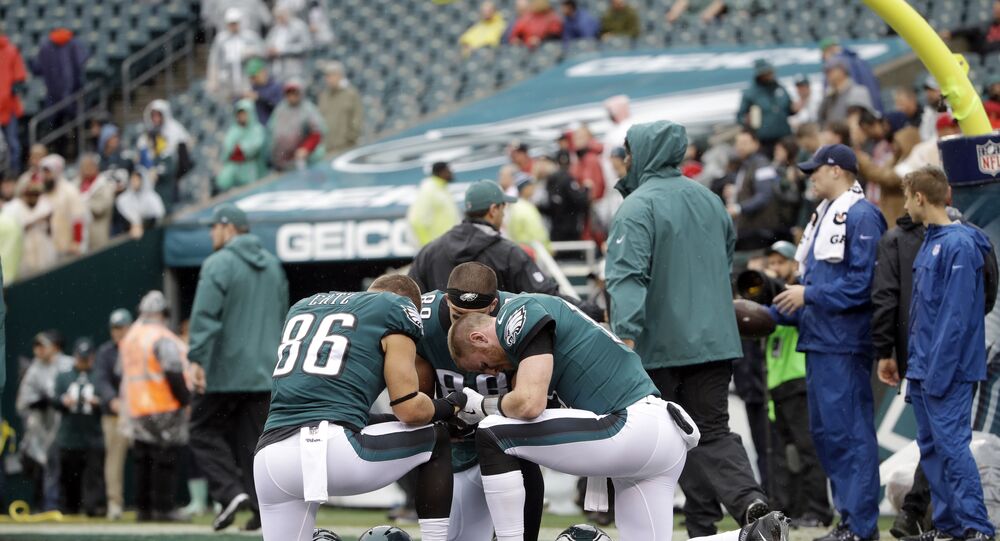 Philadelphia Eagles tight end Zach Ertz had harsh words for Fox News Tuesday after the outlet used photos of him and his team praying before a game for a report on US President Donald Trump's criticism of national anthem protests.

The segment, which aired after Trump announced on Monday that he was disinviting the team from the traditional post-victory visit to the White House, included images of Ertz and others kneeling during a pregame prayer and raising their fists in the air during the national anthem. The photos were used during the network's "Fox News @ Night with Shannon Bream" show.

It should be stressed here that the no member of the Eagles team took a knee during the anthem throughout the 2017 National Football League (NFL) season, as players on other teams have been criticized for doing.

Ertz, responding to a Fox News tweet promoting the segment, criticized the move on Twitter, saying, "this can't be serious… Praying before games with my teammates, well before the anthem, is being used for your propaganda?!"

"Just sad," he added. "I feel like you guys should have to be better than this."

Chris Long, a defensive lineman for the Eagles, also commented on the issue.

"Imagine wanting to please the boss so very badly that you run stills of guys knelt down PRAYING during pregame," the 33-year-old California native tweeted. "Not one Eagles player knelt for the anthem this yr. Keep carrying his water to sow division while misrepresenting Christian men. Aren't many of your viewers… nevermind."

In an additional tweet, Long stated that Fox News was "complicit in PLAYING America."

"This is just another day at the office for you, though. Most players (and there were many players, many players…) that wanted to opt out had decided long b4 the anthem rule came down. It wasn't discussed once in our meetings about the visit," he said.

Hours after Ertz and Long responded, the network issued an apology and deleted its tweet about the story.

"During our report about President Trump canceling the Philadelphia Eagles trip to the White House to celebrate their Super Bowl win, we showed unrelated footage of players kneeling in prayer," the statement from Christopher Wallace, the executive producer of the nightly show, says. "To clarify, no members of the team knelt in protest during the national anthem throughout regular or post-season last year."

"We apologize for the error," Wallace concluded.

The apology didn't do much to ease Long's opinion of the network. The two-time Super Bowl champ rejected the notion that the pictures were used in "error," instead suggesting that it was "intentional and strategic."

​A statement released by the White House explains that Trump decided to disinvite the team after it was reported that only a few of the Philadelphia team's players had indicated they planned to accept the invitation.

"The Philadelphia Eagles are unable to come to the White House with their full team to be celebrated tomorrow. They disagree with their President because he insists that they proudly stand for the National Anthem, hand on heart, in honor of the great men and women of our military and the people of our country," the release states. "The Eagles wanted to send a smaller delegation, but the 1,000 fans planning to attend the event deserve better."

During a Tuesday briefing, US Press Secretary Sarah Sanders suggested that the Eagles' decision to not show up for the ceremony was part of a "political stunt" since the team ultimately decided to send only a few players after previously notifying the White House that some 81 members of the team would show up.

Kneeling as a protest during the national anthem began in August 2016 when then-San Francisco 49ers quarterback Colin Kaepernick began to do so because he refused to "show pride in a flag for a country that oppresses black people and people of color." Though the 30-year-old free agent's move was meant to highlight the high-profile killings of black men at the hands of police, the issue has since been reimagined and presented as protesting the national anthem and disrespecting the flag — something those who kneel consistently deny is their intent.

As Sputnik previously reported, the NFL recently adopted a new policy that fines teams and players who "do not stand and show respect for the flag and the anthem." Roger Goodell, the commissioner of the league, explained that the policy came about due to protests that depicted the league as unpatriotic. The NFL Players Association has since stated that it was not consulted on the matter and would challenge provisions that are inconsistent with their collective bargaining agreement with the NFL.