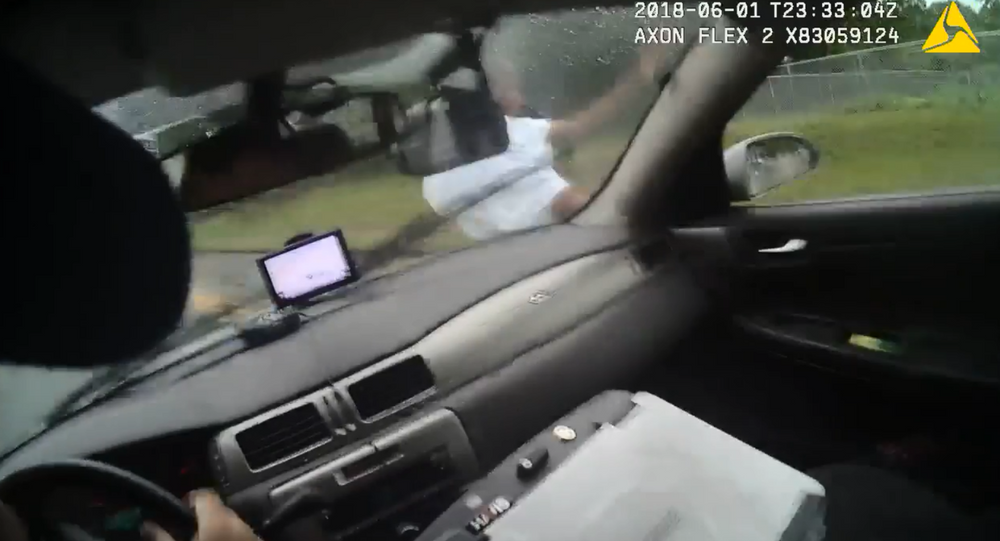 ‘I Got Him With My Car’: US Cop Fired After Ramming Suspect with Vehicle (VIDEO)

Georgia’s Athens-Clarke County Police Department announced Saturday the dismissal of one of its officers after an internal investigation proved he had intentionally hit a fleeing suspect with his police cruiser.

Bodycam footage released by the department this weekend shows officer Taylor Saulters jumping into his car, speeding down a roadway and using his cruiser to ram a suspect escaping on foot. The incident took place June 1, 2018.

As Saulters exits his car, a group of community members gather on the scene, complaining about how the officer used his vehicle. One woman is heard saying, "You didn't have to hit that man like that."

Saulters is later heard threatening to use his stun gun on Timmy Patmon, the suspect, while Patmon is lying face down on the ground and already restrained by Saulters' partner, Officer Hunter Blackmon.

© Photo : Pixabay
They Speed Among Us: Georgia Cop Pulls Over Alien Doing 84 (PHOTOS)

"Give us your hands now, or you're gonna get tased," Saulters tells Patmon. "Do you understand me? Make the right decision."

As another officer arrives on the scene, Saulter explains that the growing crowd is upset because "I got him with my car."

While Patmon is telling Sautlers that his lower body hurts because he was hit with the cruiser, Saulters cuts him off, saying, "I know… I know what I did, why did you run?"

After Patmon is placed inside the cruiser, the remainder of the 13-minute recording shows Saulters driving his car to meet with officers at a different location. Once Saulters regroups with the rest of the squad, he offers an explanation.

The footage ends as Saulters' partner recounts the events that took place to another officer.

In the department's Saturday statement, it was noted that Saulters was immediately placed on administrative leave after the incident, then fired the next day.

"After reviewing the officers' body camera footage, and all the other facts and circumstances of this case, Chief Scott Freeman terminated the employment of Officer Taylor Saulters," the statement reads.

Patmon, who suffered scrapes and bruises from the altercation, was later turned over to the Athens-Clarke County jail after being taken to a hospital for treatment, the Atlanta Journal Constitution reported.

The Georgia State Patrol and Georgia Bureau of Investigations are also conducting their own independent investigations of the June 1 event.