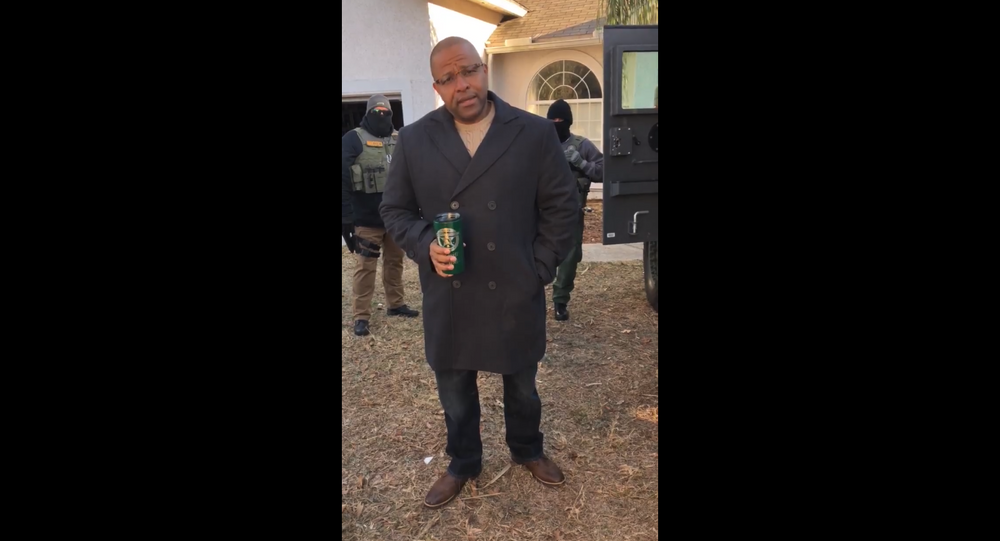 In January, Sheriff Darryl Daniels of Clay County, Florida, had officers film the aftermath of a SWAT raid on a residence, but the statements Daniels made in the now-viral video don’t add up, according to a new report.

The video begins by showing a line of youths handcuffed and sitting on the sidewalk before showing a number of officers, some wearing masks over their faces even after the bust. About two dozen officers can be seen in the video outside the residence.

​There are also two Mine-Resistant Ambush Protected (MRAP) armored vehicles on scene. MRAPs are military vehicles designed for surviving improvised explosive devices (IEDs) in Iraq, but which police departments across the United States typically get for free from the Pentagon under its 1033 program.

The camera pans to Daniels. He tells the viewer, "we just served a search warrant on a narcotics house," before proceeding to the front door. As he does so, the camera focuses on a smashed window.

"One day, you'll be sleeping at night or early one morning and you'll hear a bang and a lot of noise and the end result and the outcome will be me standing in your living room, like I said, drinking my morning cup of coffee," the sheriff says after entering the residence. He then takes a sip of coffee from his thermal mug, emblazoned with his office's badge. "Fifteen going to jail, three big gulps," he says.

The raid was ostensibly to find heroin and fentanyl, according to journalist George Joseph, who obtained records on the raid, in an article in The Appeal on May 30. Fentanyl is a dangerous opioid often mixed with heroin to increase its potency.

However, no opioids were found at the residence. Sergeant Keith Smith, a spokesman for the Clay County Sheriff's Office, said that they found 1.2 grams of a substance that they believed was heroin and fentanyl after a field test, but which more tests revealed was not an illicit drug at all.

A former Clay County sheriff's deputy who requested anonymity over fear of police retribution told The Appeal that it came as no surprise that the officers never found any opioids. "Of course they didn't, there never was any." He went to say that that the faulty field test could have been avoided, but "the really good ones cost money, but those take away your probable cause."

Police officers in the US are required establish "probable cause," a legalistic term that basically means officers have a good reason to search a person or their property, which are protected by the Fourth Amendment to the US Constitution against "unreasonable" searches and seizures.

"It's probably the cheapest ones they could get to do the minimum standards for an investigation," the anonymous former officer said.

The former officer also noted that the actual controlled substances uncovered at the residence — 34.8 grams of marijuana — don't account for the charges brought against two of the people caught up in the raid, who were charged for possession of more than 20 grams each.

The raid only resulted in six arrests, including five adults and one juvenile. It isn't clear what the juvenile was accused of, as police are forbidden from disclosing such information about minors. Four of the adults were charged for marijuana possession and three were charged for possessing drug equipment. One suspect was arrested for a positive field test of MDMA and allegedly had a few grams of cocaine.

The amount of marijuana discovered indicates that it was for personal use and not meant to be distributed, a different sheriff told The Appeal.

The Clay County Sheriff's Office also deployed four flashbang grenades during the raid; however, no weapons were discovered at the house. A baby was present in the house at the time of the raid, according to News4Jax.

"He's creating a self-aggrandizing mythology," the former Clay County deputy told The Appeal. "It's all choreographed — such a chicken sh*t bust, instead of the MRAPs and a SWAT team, they could have used two deputies for that."

SWAT raids have proliferated in the United States in the past few decades. In 1981, there were 3,000 no-knock raids in the US, but that number grew to 50,000 by the year 2005. Criminologist Peter Kraska estimated that there could be as many as 80,000 per year, according to a 2014 article by the Washington Post.