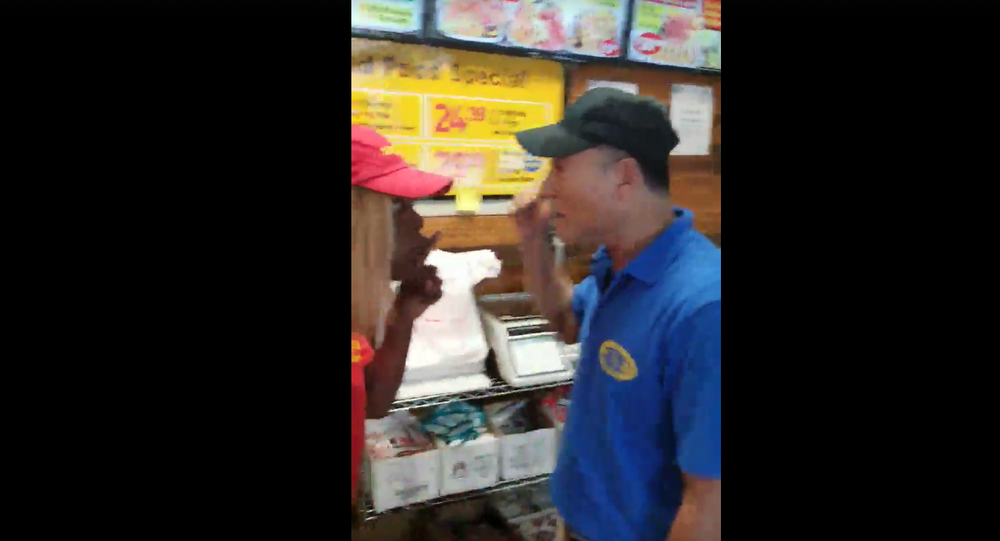 The owner of a Korean restaurant got caught on video Friday hitting one of his black female employees after an order was messed up and she refunded a customer $8.47.

Doo's Seafood in the Atlanta suburb of Snellville, Georgia, is owned by a man who finds it acceptable to assault his employees when they make mistakes. "Anybody know lawyers or how to publicise this situation," asks Markus Moultrie, a customer who filmed the event on Friday and posted the video to Facebook, where it's been viewed over 300,000 times as of Monday.

"Anybody know news connects cuz this sh*t was crazy!!!" Don't worry Markus, Sputnik News is on the case.

"An Asian man hit his black employee becuz his wife was mad at me because she had to give me a refund for $8.47" Moultrie said in the video description."She told her employee she had to pay for my meal… I told her that's nonsense if you the one who f*cked up my order then you need to pay for it not ya employee." The owner is identified on the restaurant's website as "Mr. Lee."

It's at that point that Moultrie's video begins, with Lee and his wife together, confronting the employee, who is surrounded by several other employees. Moultrie is heard saying to the employee "no ma'am, you don't need to pay for it she needs to pay for it." He then says to the owner's wife, "you made the mistake."

Moultrie then addresses the owner in a calmer tone, trying to reason with him. "Sir, it's honestly not her fault." That's when Lee lashes out, striking the employee just off camera and sending food flying across the kitchen.

After advising Lee that he caught the strike on camera, Moultrie advises the employee that "you need to get a lawyer, he just assaulted you… and I got it on camera!"

As the argument between the employee and Lee continues, Moultrie begins to rally support for the struck employee, verifying with several other customers and employees that they all saw Lee hit her.

"You just hit her, sir, you assaulted her! I'm calling the cops on you," he says as the video ends.

Doo's Seafood has been hit with dozens of 1-star reviews on Yelp since Friday, bringing the event to the attention of other customers.

"You cannot abuse your employees especially when you or your wife is in the wrong!!! wow seriously totally disgusted!!! never ever ever eating here this place lost my support respect your customers and your employees!!" reads one review posted Friday.

"I would never patronize any of these locations again. I witnessed the owner assault one of his employees. I'm surprised he isn't in jail!" reads another Saturday post.