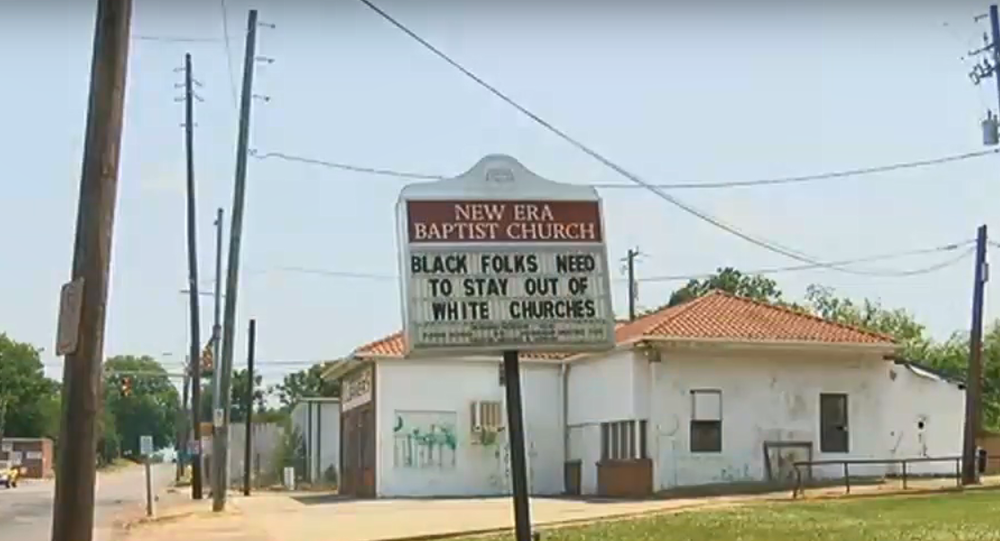 A church’s highway sign in Birmingham, Alabama, has sparked controversy for saying "Black folks need to stay out of white churches." The pastor of the black church that put up the sign has defended the remarks as encouraging locals to fight gentrification.

Rev. Michael R Jordan, pastor of New Era Baptist Church in Birmingham's West End, put up the sign on Saturday, according to AL.com. The reverse of the sign gives a complementary message: "White folks refused to be our neighbors."

Jordan is known for using his church's sign to spread sometimes controversial political messages, and this situation is no different. This time, the pastor is taking aim at Church of the Highlands, a megachurch with 16 branch locations that collectively attract more than 40,000 worshipers weekly — the largest church in Alabama. Soon that'll be 17 locations — the newest one is slated to be right in Birmingham's West End.

Church of the Highlands founder Chris Hodges announced the new location May 2, saying, "We've decided that this fall, we're going to launch a campus but it's not gonna be like our normal campuses. We're gonna launch a campus right in the heart of the highest crime [area] of our entire city. And we're gonna do a live service, with live speaking and different music and it's gonna be different in a lot of ways to meet the needs of that community," the Christian Post reported.

​​It's in that light that Jordan advised black Birminghamians to "stay out of white churches." Jordan told AL.com that "Blacks have flooded white churches and moved into white neighborhoods… It's for status reasons. It's a sense of self-worth. But 99 percent of whites won't go to a black church."

Jordan also suspects that the megachurch's new planned location is a ploy to get its black members to stop going to other locations. "The main campus has gotten fed up with blacks joining their church, so they decided, 'Let's put you a church over there,'" he said.

Jordan told AL.com that his fears include the City of Birmingham giving the new church priority funding over other social programs, including those designed to address the social problems Hodges claimed to be opening the church for. Addressing Hodges' concerns more directly, Jordan said, "If you're concerned about crime and drugs, why did you leave the city and start your own school systems? It's very hypocritical. Chris Hodges won't move next door to us. He won't let his family go to school with us. If you want to help with crime, you have wealthy entrepreneurs, give these black boys a job, not just cleaning up. Start some job programs and fund it through the black church."

The fear of gentrification in Birmingham's West End is real. At a community forum last October, Evanne Gibson, president of the West End community, told AL.com, "I know gentrification is here." She said that vacant lots were being bought up in her community and that she worried about the ability of poor and fixed-income residents to stay in their homes.

Chris Hatcher, an urban design administrator for the city of Birmingham, is heading up the Preserving Dynamic and Diverse Neighborhoods Task Force, which is tasked with recommending regulatory policy changes in housing affordability, anti-displacement zoning, education and workforce training, transportation and health equity in an effort to mitigate the effects of gentrification. "Birmingham is a city where we need reinvestment in our community," Hatcher said at the October forum. "The reinvestment in our community is what we are trying to achieve. The forced displacement of people living in these communities is something that we don't want."

Hatcher's efforts have clearly done little to assuage the fears of residents like Jordan, who described how racial lines in the city have been perpetuated since the end of formal segregation. "White churches deserve blame for the segregation of neighborhoods and schools, Jordan told AL.com Wednesday.

The Root noted the accuracy of Jordan's argument, pointing out that according to the US census, Birmingham's black population before segregation was outlawed peaked at 40.7 percent, but that today it stands at 72 percent, and that this difference comes not from more black people moving to the city, but from white people leaving it.

"There is a spirit that is over this city that has to be brought down. A spirit of racism and division. We have to change the conversation to what we need it to evolve into. Darkness cannot drive out darkness. Only light can do that. Hate cannot drive out hate; only love can do that."

Another black pastor, Adam Mixon of Birmingham's Zion Spring Baptist Church, said that the mayor's comments "demonstrate a fundamental misunderstanding of the black community and a mischaracterization of the black church," The Root reported.

"We would suggest that our mayor realize that our communities did not get this way accidentally. Economic segregation, over-criminalization of black people, white flight, real estate redlining, failing schools… these are the methodologies employed whereby black communities and black families have been systematically crippled and destroyed… Mayor Woodfin (Pastor Hodges) — we suggest that you review our history. Your present mindset seems to overlook how white communities, and yes the white church, have been complicit in creating the circumstances that the black community and the black church have been forced to deal with," Mixon wrote in an open letter on his blog on May 4 in a reply provoked by the initial announcement of the new megachurch location.