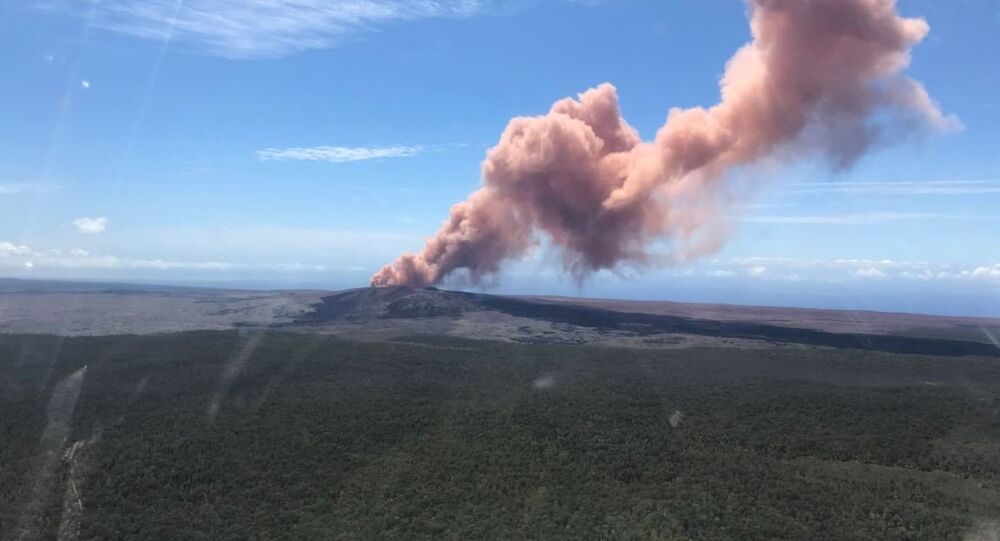 “Hawaiian Volcano Observatory has verified reports a new fissure, number 18,  opening up to the west, or Kalapana side, of Highway 132 on Halekamahina Loop Road in lower Puna … Lava spatter activity and gas emissions are occurring at this time,“ the Civil Defense said on Sunday.

At the same time, the US Geological Survey’s Hawaiian Volcano Observatory said that the earthquake activity and ground deformation continues.

Hawaii Kilauea Volcano Could Soon Explode in Once-In-a-Century Eruption Event.
As The Lava Levels Inside The Volcano Drain Lower, The Danger of An Eruption Increases.
President Trump Has Declared The Island a Disaster Zone.#Kilauea 🌋
Prayers For Hawaiipic.twitter.com/A3zBzwlHpd

© AP Photo / Scott Wiggers/Apau Hawaii Tours
Doomsday for Hawaii? New Lava Vent Threatens Big Island (VIDEO)
“Aerial observations of this new fissure indicate it is at least several hundreds yards long and producing spatter rising many tens of feet into the air. A slow-moving lava flow is moving away from the vent,” the observatory said

On Friday, US President Donald Trump unlocked federal funding for Hawaii, providing both state and local authorities with federal assistance in their recovery efforts in the areas affected by the ongoing eruption.

The major Kilauea volcano eruption started on May 3, prompting evacuations in the Puna district which is home to around 10,000 residents.

Footage of Fissure 16 yesterday producing a lava flow out to ~230 m. Fissure 17 also opened up nearby at 6 pm. Additional outbreaks are likely. #Kilauea https://t.co/TXzHRPuIIE pic.twitter.com/NNSGZiYiFx

​Lava from Kilauea has destroyed so far 36 structures, including more than two dozen homes, and covered 117 acres of land. On Saturday, fissures No. 16 and No. 17 opened up some 300 feet apart from each other.

New video from Hawaii shows Kilauea remains very active. The latest fissure to open up made a roaring sound similar to a jet engine as the mountain spewed chunks of lava into the air. pic.twitter.com/GApA3AtfDZ