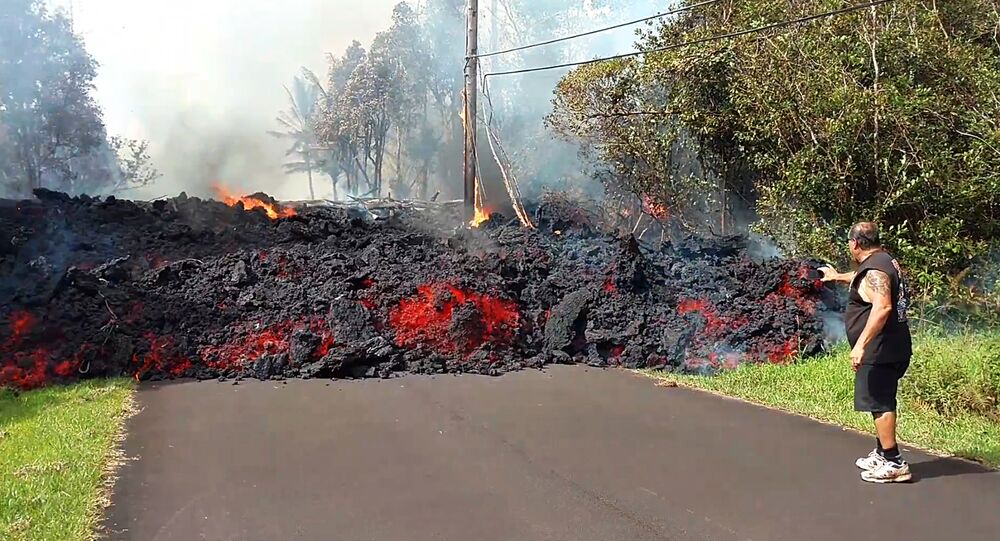 BIG ISLAND (Hawaii) (Sputnik) - Another lava vent has opened on Hawaii’s Big Island as the US authorities warn of a possible explosive eruption of the island’s Kilauea volcano, the Hawaii County Civil Defense said.

USGS
Hawaii Authorities Warn of Possible Powerful Volcanic Explosion
The new fissure is the 16th that has emerged since the beginning of Kilauea’s latest eruption on May 3. The US Geological Survey’s Hawaiian Volcano Observatory said on Friday that 15 previous fissures have not produced any lava since May 9.  However, lava previously emitted from those openings has reportedly destroyed 36 structures, including over 20 homes, and covered 117 acres of land.

The observatory also said that the withdrawal of lava from the summit lake of Halemaumau crater could lead to a steam-driven eruption. It could generate ash plumes as high as 20,000 feet, which would affect the area of up to 12 miles. The biggest danger from such eruption is ash fallout, according to civil defense.

Meanwhile, the Hawaii National Guard jointly with other US authorities are developing a mass evacuation plan for thousands of Big Island residents in light of a possible explosive eruption of Kilauea volcano, the guard’s spokesman told Sputnik.

“We are looking at a mass evacuation plan just in case the roads get cut off on both sides of the Puna area and a lot of residents will be stranded,” Maj. Jeff Hickman said.

However, the spokesman did not specify the exact number of people who would be evacuated, but said that it probably will be “in the thousands.”

Unbelievable.. Listen to the sound!

The earth is breathing.. Yesterday in Leilani Estates, Hawai’i.

© REUTERS / Marco Garcia
Scientists Predict Massive Explosions Due to Hawaii Volcano
In order to develop a mass evacuation plan, the Hawaii National Guard takes several different metrics into account, including the number of soldiers, available trucks and helicopters, and the number of residents in the potential evacuation zone, Hickman added.

“Right now, it’s not a mandatory evacuation. Local authorities are putting out information and letting people make their own decisions … It’s not our job to scare the public, it’s our job to educate, so they can make the most informed decision,” the spokesman noted.