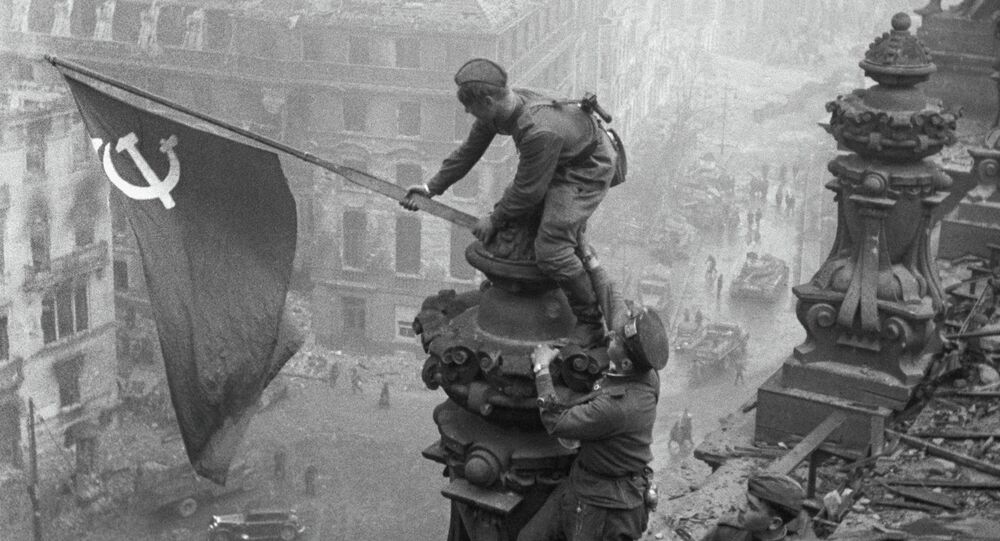 WASHINGTON (Sputnik) - Russia will do everything possible to pass truthful memories of World War II to the next generations despite attempts to twist history, Russian Ambassador to the United States Anatoly Antonov said during the celebratory event on the occasion of the Victory Day.

"Regretfully, attempts to defile and twist the sacred memory of the role of the Soviet Union in World War II are becoming more and more frequent today. Facts are being turned into fakes for petty politics in order to downplay the heroic deed of a Soviet soldier and to equate torturers and their victims," Antonov said on Wednesday. "I can assure you: Our country has always been doing everything to pass the truthful and untwisted historical memory on to the future generations, and will continue to do so."

Russia and other countries of the former Soviet Union and of the world celebrated Victory Day on May 9, marking the 73rd anniversary of signing the German Instrument of Surrender, which put an end to World War II in Europe.

"Today is a special, emotionally overwhelming day… All post-war generations saved from the ‘brown plague’ are united in their endless pride for that glorious triumph and in their sorrow for the grievous losses by many nations during those darkest years," Antonov said. "For us the victory over Nazism will never become simple tales from history books. The Victory lives and pulsates in our hearts."

© Sputnik / Evgeny Biyatov
'Western Politicians Have Invested Interest in Downplaying the Soviet Role in WWII' – History Prof.
"The memory of the immortal triumph is sacred. 27 million lives of Russians and Ukrainians, Belarusians and Kazakhs, Uzbeks and Armenians, Georgians and Azerbaijanis, Moldovans and Kirghiz, people of the Baltic states, and other nations of the Soviet Union, were placed on the altar of Victory," the Ambassador added. "If it wasn’t for the courage, fortitude and love for their Motherland of our soldiers, partisans and homefront workers, the world would look totally different today."

Antonov also stressed that Russia deeply values the contribution of its allies in the joint fight against Nazism.

The celebratory event at the Russian embassy was attended by representatives of the various diplomatic missions. The guests were also treated to the traditional foods of the former Soviet nations including Armenia, Uzbekistan and Belarus.

The event concluded with the Tanki (Tanks) movie showcasing. The movie tells the story of engineer Mikhail Koshkin who is developing a prototype of a new innovative tank T-34 on the brink of the war. To prove the uniqueness of the combat vehicle, Koshkin and his team go to Moscow on their own tanks.