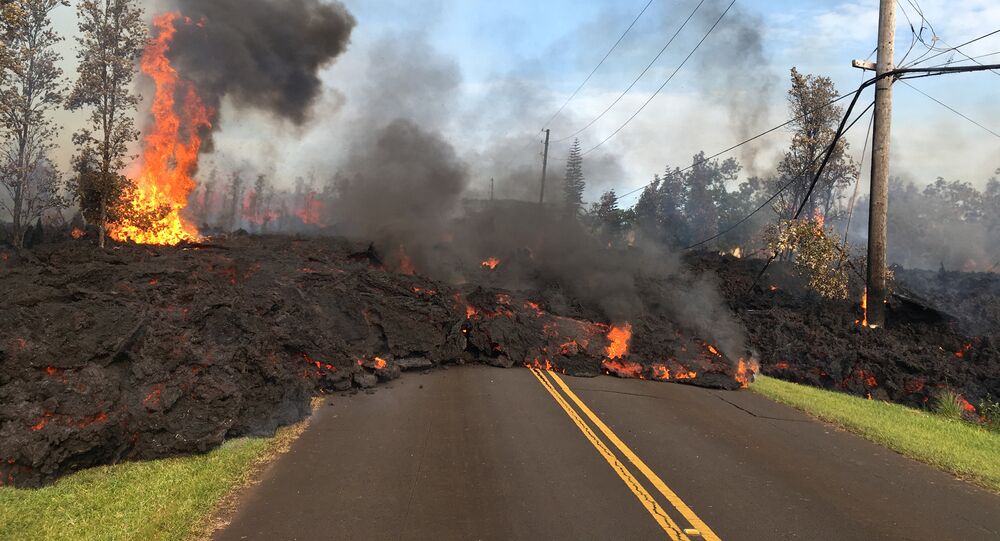 "The eruption along Kilauea Volcano's lower East Rift Zone within the Leilani Estates subdivision has paused. Strong emission of gas continues from the fissure system that is now about 2.5 miles long," the observatory said in a Tuesday statement.

The statement added that the pause was "likely temporary" and additional lava and fissure outbreaks "are possible at any time."

© AP Photo / HAWAII ELECTRIC LIGHT
Two Strong Earthquakes Rock Hawaii's Big Island as Volcano Erupts (VIDEOS, PHOTO)
Since the start of the eruption on Thursday, a total of 12 fissures have emerged. The lava emerging from those fissures has covered 104 acres and destroyed 35 structures, mostly homes, the Hawaii County Civil Defense agency said on its website on Tuesday. On Sunday, the civil defense put the number of destroyed homes at 26.

The natural disaster has also resulted in the mandatory evacuation of around 1,700 residents of the two subdivisions affected by the eruption, namely Leilani Estates and Lanipuna Gardens. Both subdivisions are located in the east rift zone of Kilauea volcano in the Puna district of the Big Island, the biggest island of the Hawaiian archipelago.

WATCH: Lava from Hawaii's Kilauea volcano oozes through residential areas. "This is not over," officials say https://t.co/Hir967N4uN pic.twitter.com/GcHrOzMzo9

Highway 130, one of the main access roads to and from the area affected by the eruption, has been partially closed due to cracks in the roadway, caused by previous eruption. Residents of Leilani Estates have been allowed to check on their property during daylight time until further notice. The residents of Lanipuna Gardens on the other hand have not been able to access their property due to dangerous volcanic gases, according to civil defense.

The Kilauea Volcano, which is currently destroying homes in Hawaii, recently smiled at us. pic.twitter.com/WaFoe1RVEf

Kilauea volcano, which has been erupting continuously since 1983, is one of the most active volcanoes in the world. On Friday, a magnitude 6.9 earthquake, the strongest in Hawaii since 1975, rattled the island.