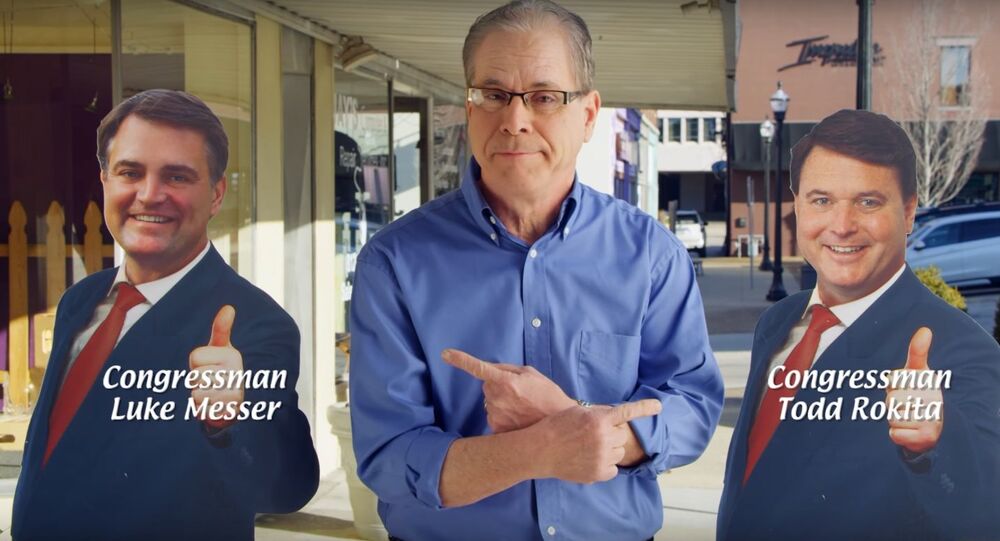 Candidates From Indiana, W Virginia Duke It Out in Republican Senate Primaries

Republicans in four states are going to the polls Tuesday to select their parties' nominees for the midterm elections in November. The contests in Indiana and West Virginia have proven particularly heady, with candidates outdoing themselves to play up their likeness to the president.

Primary elections are taking place today in Indiana, West Virginia, Ohio, and North Carolina, with each of the four states handily won by Donald Trump in 2016. The president's popularity among Republican-leaning voters has resulted in a crop of candidates looking to cash in on Trump's 'Washington outsider' and businessman appeal, along with just a pinch of the president's tendency to make brash, bold and sometimes politically incorrect statements.

Nowhere has this been more evident than in Indiana and West Virginia. In 'The Crossroads of America' state, a fierce battle has been waged between Republicans Todd Rokita, Luke Messer and self-funding businessman Mike Braun. The campaign has been rife with personal attacks, attempts to capitalize on 'Washington outsider' rhetoric, and defense of the president against a Democratic witch-hunt.

© AP Photo / Kin Cheung
No Trump-Russia Collusion: How Soros, Clinton Effort to Dethrone Donald Failed
During their final primary debate last week, the candidates could give no examples of Trump policies they disagreed with. "[Trump] knows I have his back," said Rokita, who is known for his opposition to nation-building and his promise to "buck the system."

The candidate also sponsored a Congressional resolution ordering FBI special counsel Robert Mueller to provide definitive proof of Trump's alleged collusion with Russia or put an end to his investigation.

This witch Hunt must end! Mueller has shown NO evidence of collusion. Who should be investigated? Crooked Hillary, Comey, McCabe. https://t.co/aYoOZuf0hm

Messer, a favored son among Indiana's political elite, responded by accusing his rival of "spreading lies and half-truths," and told a local TV station that "it's not typical that someone starts a campaign by coming after someone's spouse."

Messer also went after Rokita's voting record, saying that his opponent "talks Trump, Trump, Trump, but when it's time to show courage and vote for President Trump's agenda, he votes no, no, no." Messer, for his part, has been one of the officials talking about nominating Trump for a Nobel Peace Prize over the president's supposed role in the recent warming of ties between North and South Korea.

Mike Braun took a different tack, but also a Trump-style one, taking advantage of his 'political outsider' status and mocking his 'insider' rivals as being "swamp creatures" for spending their entire lives in politics. Trump had promised to "drain the swamp" in Washington during the 2016 election. To drive his point home, Braun even released a campaign ad walking around with humorous cardboard cutouts of his opponents.

Trump himself has held off on endorsing any of the men, although Indiana staffers from the 2016 race favor Rokita. April polling shows Braun in the lead with 26%, but a whopping 45% of Republican voters said they were still undecided. One of the men will be squaring off against Democratic incumbent Joe Donnelly in November.

To the east, in West Virginia, another Trump stronghold, three more candidates – Congressman Evan Jenkins, Attorney General Patrick Morrisey, and divisive ex-coal tycoon Don Blankenship are in a three-way race to square off against the Democratic senatorial nominee, expected to be incumbent Senator Joe Manchin.

Blankenship, convicted of violating federal safety regulations in a 2010 coal mining incident which killed 29 miners, for which he served a year in prison, presents himself as a Trump-like anti-establishment candidate, even quipping at one point that he was "Trumpier than Trump." The president himself seemed unamused over the comparison, tweeting that there was "no way" the candidate could win a Senate seat in November and co-endorsing Jenkins and Morrisey instead.

To the great people of West Virginia we have, together, a really great chance to keep making a big difference. Problem is, Don Blankenship, currently running for Senate, can’t win the General Election in your State…No way! Remember Alabama. Vote Rep. Jenkins or A.G. Morrisey!

Blankenship has a habit of making politically incorrect remarks, getting into trouble recently over a campaign ad accusing Republican Senate Majority Leader Mitch McConnell of creating "millions of jobs for China people." The candidate also gave McConnell a Trump-style insulting nickname "Cocaine Mitch," over the discovery of dozens of pounds of cocaine in a ship owned by a company belonging to McConnell's in-laws.

Blankenship's opponents Patrick Morrisey and Evan Jenkins have questioned the candidate's mental acuity and fitness, to which he has responded that governing "is not a matter of mental capacity" but "of political courage."

In spite of the high-profile rejections by McConnell, Trump, and others, and a stream attacks by Jenkins and Morrisey (who have also attacked each other as being liberal Clinton supporters), Blankenship remains narrowly ahead of his rivals, with 28%, against Morrissey, 27%, and Jenkins, with 14% in a recent poll.

Americans will go to the polls on November 6 for the midterm elections, with all 435 seats of the House of Representatives and 35 of 100 seats of the Senate up for grabs.

With Primaries Underway, What’s the State of Our Republic?

US Republican Fundraiser Files Lawsuit Against Qatar Over Hacked Emails