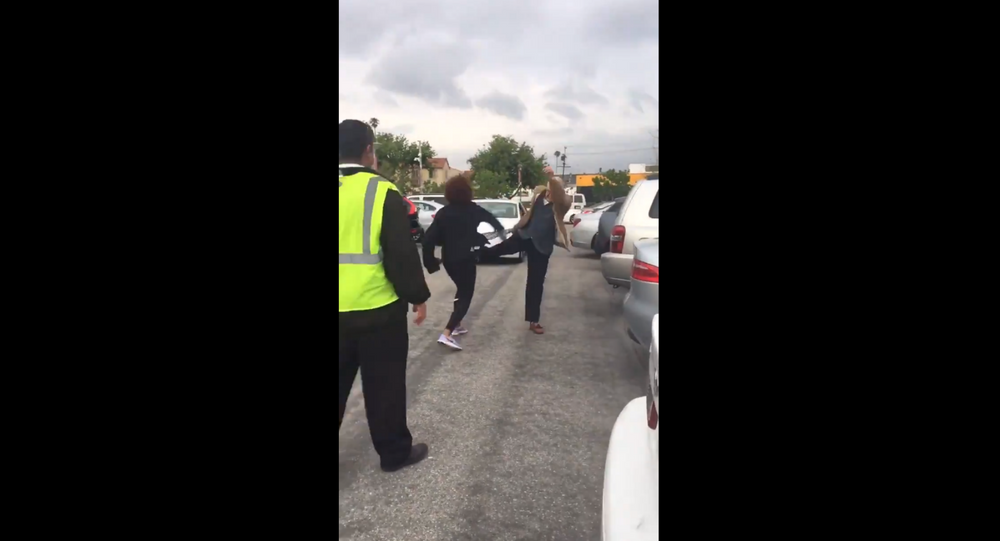 California resident Frederic Allan Shinerock went off on a racist rant late Tuesday after a student at Santa Monica College (SMC) took too wide a turn in the parking lot they were both navigating and ended up taking up two spaces.

Footage uploaded to Twitter by SMC student Enrique Conde shows the 80-year-old Shinerock repeatedly calling the unidentified student a "n***er" and suggesting that she go "back to South LA." Shinerock also screamed out that the student "didn't belong here."

But the old man didn't just dish out a verbal assault. In addition to spewing racial slurs, he also got out of his car and kicked and tried to punch the woman several times.

Speaking with local station KTLA 5, Conde explained that Shinerock let his bigotry fly as the student was in the process of fixing her parking job.

"Right away, here are these racial slurs and expletives being shouted," Conde told the station, describing the incident as a "deeply sad moment."

Shinerock, who was attending an opera on campus, was later arrested on suspicion of battery on school property by officers with the Santa Monica College Police Department.

According to department chief Johnnie Adams, police cited and released Shinerock after the altercation. The student was examined by paramedics on the scene but was not taken to the hospital for treatment.

Kathryn Jeffery, the college's superintendent and president, released a statement Wednesday saying that "there is no room for hate at Santa Monica College."

"Santa Monica College is an institution that prides itself on inclusivity and diversity and we will continue to do our utmost to uphold our commitment to provide a safe and inclusive learning environment," Jeffrey wrote on the college's Facebook page. "We will take immediate and evident action to reinforce to our students, college community and guests that there is no room for hate at Santa Monica College."

The incident, which has been classified as a hate crime, is still being investigated by officials and will be presented to the Santa Monica City Attorney's Office to determine "appropriate action."