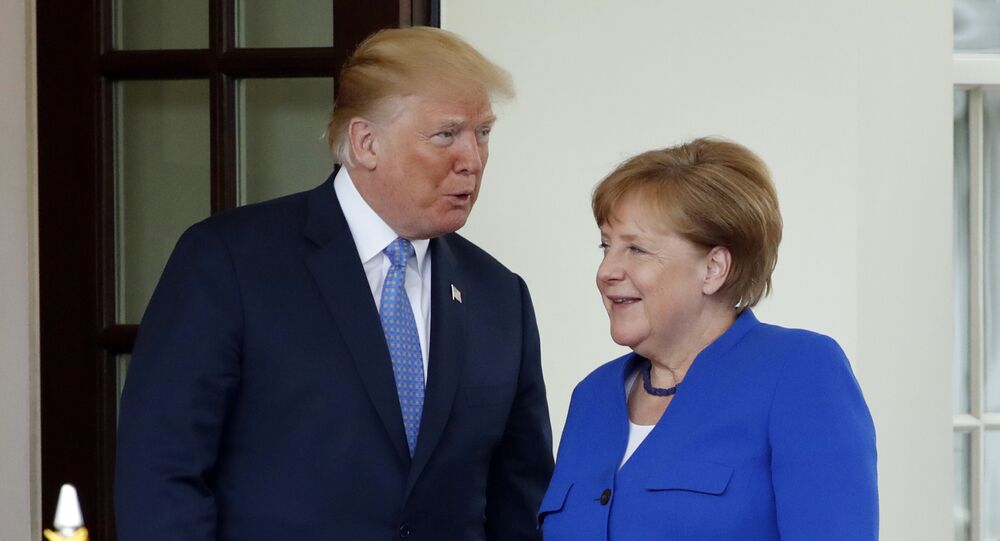 The officials, cited by the media in the wake of the meeting between the two leaders last week, shed light on some details of the recent talks, which reportedly opened a "window into Trump's mind" for those present.

Trump has turned to the German Chancellor for her expertise dealing with Russian President Vladimir Putin, CNN reported, citing an official familiar with the talks. The alleged counseling session took place during their recent talks at the White House on April 27, when Angela Merkel paid a visit to Washington DC. The report doesn’t mention what Merkel told Trump. But according to the officials, Trump didn't pay much attention to the seasoned politician's words of advice. However, the White House denied CNN’s report.

Prior to his meeting with the German Chancellor, Trump had announced his intent to normalize relations with Russia while at the same time noting that he shall maintain a hard line in his relations with Moscow.

"No one has ever taken such a harsh stance towards Russia as I did. Considering all this, if we manage to get along with Russia — it will be a good deal, not a bad one," Trump said.

The announcement followed the House of Representatives report that concluded that there was no conspiracy between Trump's team and Russia. His campaign has been suspected of colluding with the Russian government to secure victory in the US presidential election. Both Trump, who branded the conspiracy "a witch-hunt," and Moscow have denied these allegations.

US-Russian relations have been in a downward spiral since the reunification of Crimea with Russia, after which Washington imposed sanctions against Moscow and blacklisted a number of top officials. They've deteriorated even further after Moscow began helping Bashar al-Assad to defeat terrorist groups Syria as well after the UK's having accused Moscow of allegedly poisoning its former spy Sergei Skripal and his daughter Yulia in the British city of Salisbury.

While Trump is in the second year of his presidency, Angela Merkel, with her 12 years in the German Chancellor’s office, is the longest-serving elected EU leader. She hasn’t only sat at the table with Putin through numerous talks and meetings since becoming chancellor in 2005, but also developed some personal rapport. For instance, it’s been reported that the leaders exchange thoughtful gifts. Putin revealed some time ago that from time to time, Merkel brings him a few bottles of Radeberger beer, which he enjoyed drinking while working in the German Democratic Republic. Merkel, who was brought up in the GDR and speaks Russian, later shared "It is known that the Russian president drinks German beer with pleasure, sometimes it is possible to exchange. I once got really good smoked fish."

Commenting on the meeting, the CNN sources revealed more juicy details. For instance, they stressed that the US President "behaved himself" in a tete-a-tete meeting, but got emotional at a larger session when it came to discussing the trade issues and NATO and defense spending. According to the media, the President’s tone startled some German officials, who said that the meeting opened a "window into Trump's mind."

Angela Merkel had one-day meeting with Donald Trump last week, as she arrived to Washington following the three-day stay of the French president Emanuel Macron with several topics on the agenda.

The German chancellor as well as her French colleague advocated saving the Iran nuclear deal, discussed trade issues and defense spending, which remain stumbling stones for the EU relations.  According to the cited sources, Trump was "venting" about the last two matters, seemingly angry, during the meeting with top officials from both countries. So, he attacked Merkel for being "so protectionist" in trade and was particularly discontent about German car exports and demanded that Merkel revealed what she could offer in exchange for US exemption on steel and aluminum tariffs.

Another contention, which reportedly set Trump on edge, was defense spending. Trump insisted that Germany "could raise it to 2 percent tomorrow," according to the NATO guidelines. But as the later press conference showed both leaders remained on their grounds.