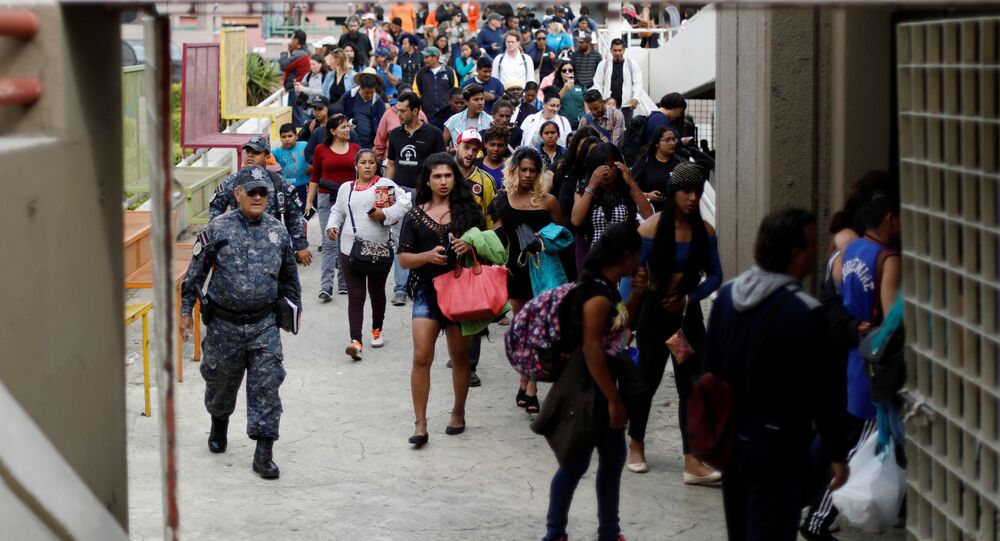 US border inspectors said on Sunday that a crossing facility did not have enough capacity for over a hundred asylum seekers flocking from Central American countries, prompting them to camp out right outside the checkpoint.

The so-called refugee caravan travelled roughly 3,200 kilometers to reach the Mexico-US border. There, they were told to wait temporarily in Mexico. "We have reached capacity at the San Ysidro port of entry," US Customs and Border Patrol (CBP) Commissioner Kevin McAleenan stated.

The organizers of the caravan appeared to be baffled by the comment, since the border control had reportedly been well aware of the arriving batch of refugees.

"We can build a base in Iraq in under a week. We can't process 200 refugees. I don't believe it," Nicole Ramos, a lawyer who provides legal assistance to caravan members, told a news conference.

The refugees say they are trying to escape deadly gang violence in their home countries, such as Honduras and El Salvador, and seek to enter the US legally by taking a 15-minute walk over the pedestrian bridge at the busy San Ysidro border.

“A group of supporters who walked from Los Angeles (really???!) march toward the US- Mexico border wall on Sunday to greet refugees from the caravan.” #CaravanOfIllegalls #QAnon #Q pic.twitter.com/8YTW3gn8cY

It was not immediately clear whether the group would ultimately be allowed to cross the US border or not, leading the asylum seekers to set up a camp outside the checkpoint.

Trump in Strict Opposition to Caravan

The US president has repeatedly denounced the refugee caravan since it set off from near the Guatemala border on March 25, most recently during an evening rally in Michigan on Saturday. He cited it as proof that the country’s migration laws are too lax.

Since President Trump Was Elected:

"Are you watching that mess that's going on right now with the caravan coming up?" he asked the crowd.

I live 75 miles from the SW Border in Texas; those of us living in the country-on Acreage, live in constant fear of Home Invasion from Drug Cartels, and Refugees, pillaging for food, or weapons. Liberals in the City never see these Peasants crossing our Border. @POTUS #MAGA

Earlier this month, Trump called for more security staffers to be deployed by the National Guard in Arizona, New Mexico and California to guard the border. He reiterated that the country’s borders were too porous or there were no borders whatsoever, stressing that the US will definitely complete the wall in the area neighboring Mexico.

"We have already started," he said.

Border Patrol tells caravan at border. We are full. No room for more illegals in US. Mexico gave caravan folks asylum to stay in Mexico. So No threat or retribution from home country.

Mexico offered Honduran caravan asylum, but they chose not to accept it! Instead tracted miles of dangerous territory to get to United States to get free housing, food stamps, free education, and anchor baby status! They are not victims! @realDonaldTrump TURN THEM AWAY!

Why didn't the migrant caravan stay in Mexico, where they speak the language and are compatible with the culture?