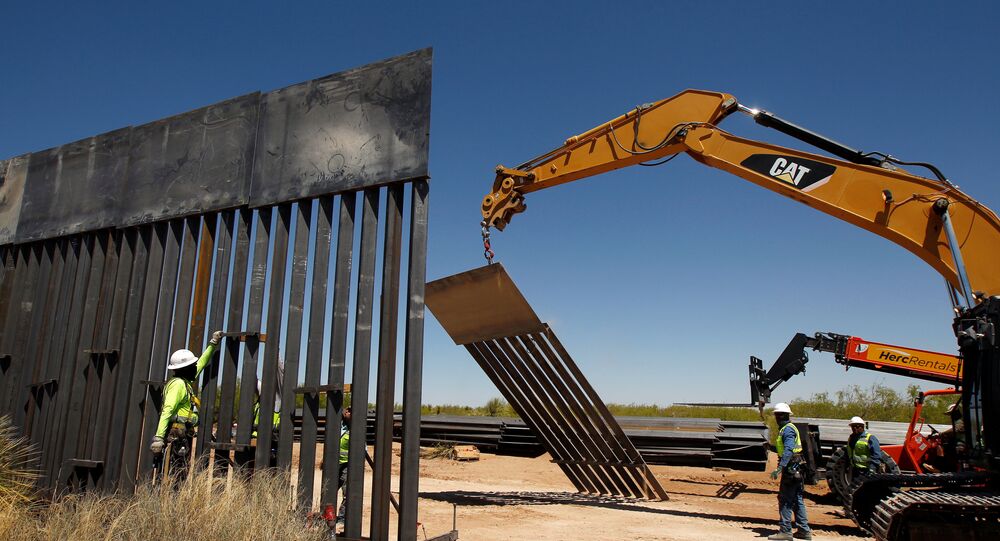 In early April, President Donald Trump tweeted about the start of construction of a wall along the US border with Mexico amid reports that Washington is allocating about 1.6 billion dollars for the implementation of the project, which was promised by Trump during his election campaign in 2016.

Speaking at a campaign-style rally in Washington, Michigan on Saturday, US President Donald Trump specifically focused on the need to pump more money into his project to build a border wall near Mexico.

"That wall has started, we have 1.6 billion [USD]. We come up again on September 28th and if we don't get border security, we will have no choice, we will close down the country because we need border security," Trump said.

In this regard, he referred to scores of Central American migrants traveling in what Trump described as a "caravan", which, he claims, necessitates the strengthening of border security.

"Watch the caravan, watch how sad and terrible it is, including for those people and the crime that they inflict on themselves and that others inflict on them. It's a horrible dangerous journey for them and they come up because they know once they can get here they can walk right into our country," Trump pointed out.

Some Twitter users were quick to gibe at Trump's words about the closure of the country, calling for his impeachment, while others supported his drive to build the wall.

Steely Dans' Black Friday is like the politics in Mexico and the US right now, I rather change my name and dig myself in a hole if my staked claim is forbidden. Ricardo Anaya must win the election. Donald Trump just keeps messing with the border wall and Nafta, poor Americans.

You just don't get it, do you @realDonaldTrump? Shutting down the govt., wasting millions of taxpayer dollars just to waste even more on a wall we don't need, is a bad idea. Wake Up Already! https://t.co/f8OLiTJnUy

Okay, champ. You do you.

Looks like that "rally"
(i call it Bitchfest) gave trump a new bag of wind with which to spew.

The country doesn't need a border wall and for Trump to support a government shutdown just to message his ego is just ridiculous.

Trump has drawn Our Red Line!

We will no longer be the victims of outrageous Quasi-Socialist Democrats telling us we don't need a Southern Border Wall.

Or declaring Amnesty for aliens.

Or shaming us because we withdrew from the Paris Climate Hoax or the Nukes for Iran Deal. pic.twitter.com/pPGGYrRtT4

Trump threatens to "close down the country" if he doesn't get more border wall funding in September.

Does this man really understand what he's saying?

You can't close the country down, Trump.

LO, I am expanding my Vocab
So Trump claims lot of times the illegal border crossers don't know what or why they are doing…they sound like Trump. Can we build a border wall around Donnie?
That would be lovely 😊
One illegal hard working Hispanic is worth 250 trumpeteers
my take

In case no one bothered to tell you, you can't shut the country down.

If you shut the federal gov't down, say on election day, guess what? The states will ignore you and we will vote.#Impeachment is your future#TheResistance https://t.co/tNm2jB8NmX

Trump's remarks came after he tweeted about the beginning of the construction of the border wall earlier this month.

Great briefing this afternoon on the start of our Southern Border WALL! pic.twitter.com/pmCNoxxlkH

Ronald Vitiello, US Customs and Border Protection (CBP) acting deputy commissioner, said for his part that the US administration earmarks about 1.6 billion dollars of 2018 congressional appropriations toward creating and replacing nearly 100 miles of wall along the southern US border.

© AFP 2020 / DAVID MCNEW
'Are You Crazy?' Trump Brushes Off Mexican President's Anti-Wall Request
Constructing the border wall to contain illegal immigration and grapple with drug trafficking has been Trump's signature pledge on the campaign trail and during his presidency.  Shortly after taking office in January 2017, Trump signed an executive order to initiate the border wall project.

Republicans and Democrats have been trying to reach a deal on a roughly 1.2 trillion-dollar spending bill for the remainder of the fiscal year, which ends September 30. The bill was inked by Trump in March 2018.