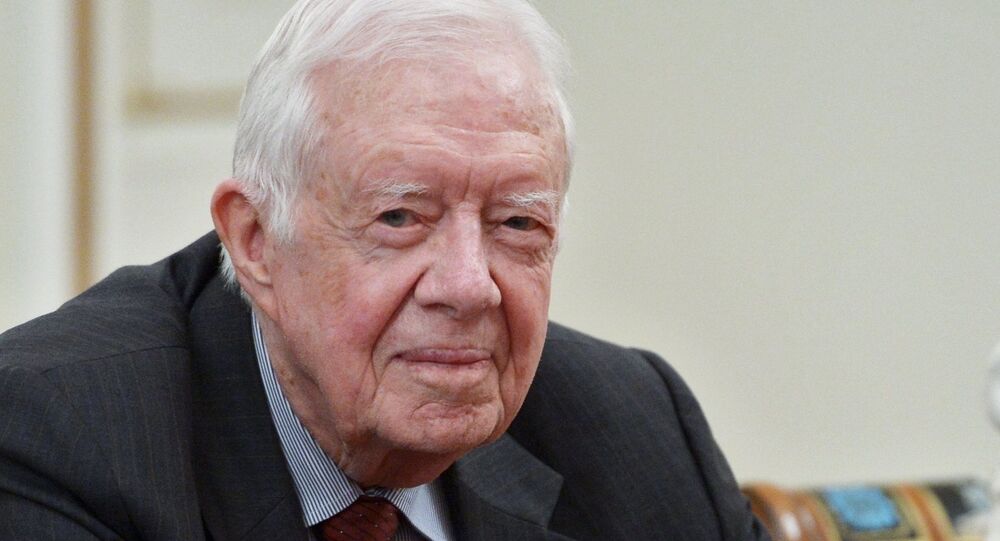 Former US President Jimmy Carter has said that US military strikes in Syria, Afghanistan, Iraq and Yemen often result in high civilian casualties and has given Donald Trump advice on the upcoming talks with North Korean chief Kim Jong-un.

In an interview with The New York Times Carter, who had earlier said American drone strikes in Syria, Afghanistan, Iraq and Yemen often result in high civilian casualties, was asked whether he thinks this “contradicts our claim to be a peaceful nation devoted to human rights.”

“I think sometimes we have bordered on committing war crimes. I don’t think that we adhere to a just approach to war, where we are supposed to make armed conflict a last resort and limit our damage to other people to a minimum,” the ex-president noted.

“I think our country is known around the world as perhaps the most warlike major country there is. China hasn’t been at war with anybody since 1979,” he added.

© AP Photo / Ross D. Franklin
Guy Needs All the Help He Can Get: Jimmy Carter Says He Prays for Donald Trump
When asked about who was the greater threat to the US: the Soviet Union during the Cold War years, or Russia now, the 39th President of the United States said that the Soviet Union then was more of a threat.

“Both Brezhnev and I, when in office, faced the immediate prospect of a conflagration that would deteriorate into a nuclear exchange,” Carter said.

Advice for Trump Ahead of Meeting Kim

Jimmy Carter, who previously met with North Korean leaders, was also asked about the advice he could give Donald Trump ahead of his planned meeting with Kim Jong-un.

“I’ve shared my advice with Trump’s national security adviser. The North Koreans want a binding agreement that the United States will not attack them so long as they stay at peace with their neighbors and with other countries. If they can get that and the insurance and proof of it, then I think that they might very well give up that nuclear program,” Carter said.

He declined to forecast the outcome of the US-North Korean summit.

“They’re both apparently kind of brash people who speak off the cuff without careful consideration or without adequate advice from their own responsible associates,” Jimmy Carter noted.

He has remained active in public life during his post-presidential years, and in 2002 he was awarded the Nobel Peace Prize.