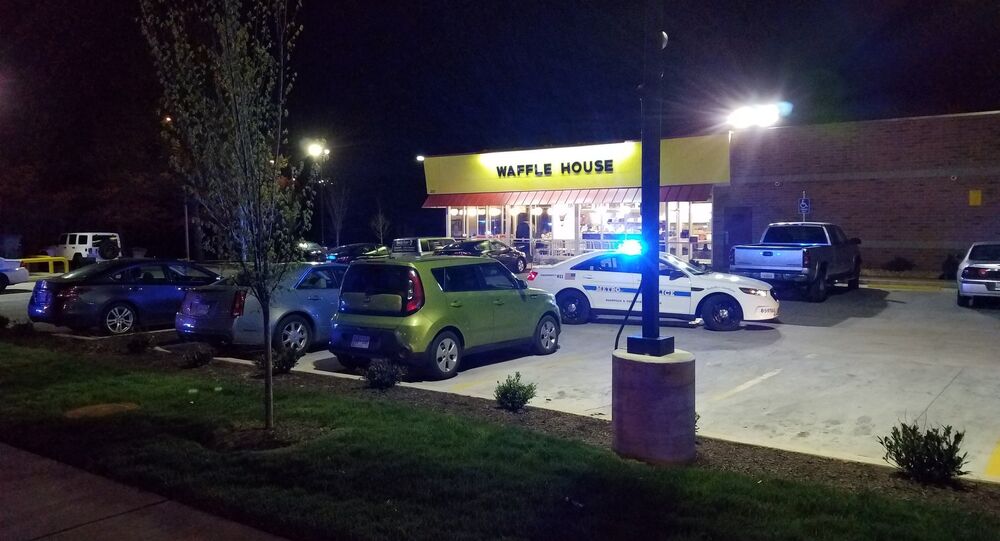 Nudist Kills Four Near Cafe in Tennessee, US

According to the police, three people died immediately and one person succumbed to wounds later in hospital after an unknown man began shooting at the Waffle House cafe near the US city of Nashville, Tennessee.

The Metropolitan Nashville Police Department said that 29-year-old Travis Reinking is wanted. He is suspected of being a gunman as the pickup truck that the perpetrator used to get to the scene was registered to him.

READ MORE: One Injured in School Shooting in US State of Florida, Suspect Arrested

Police reported that four people had been killed and two got injuries as a result of the shooting. Police spokesman Don Aaron said that the suspect shot two people in the parking lot and then continued firing inside the restaurant.

Investigation on going at the Waffle House. Scene being processed by MNPD experts. This is the rifle used by the gunman. pic.twitter.com/lihhRImHQN

According to the police, the attacker was naked during the shooting. He left the scene; law enforcement agencies are searching for him.

BREAKING: Travis Reinking, 29, of Morton, IL, is person of interest in Waffle House shooting. Vehicle the gunman arrived in is registered to him. Gunman last seen walking south on Murfreesboro Pike. He shed is coat and is nude. See Reinking? Pls call 615-862-8600 immediately. pic.twitter.com/duoWCo5fC0

A 29-year-old male was credited with saving many lives, as he managed to wrest a weapon away from the shooter.

"No doubt he saved many lives by wresting the gun away and tossing it over the counter and prompting the man to leave," the spokesman noted.