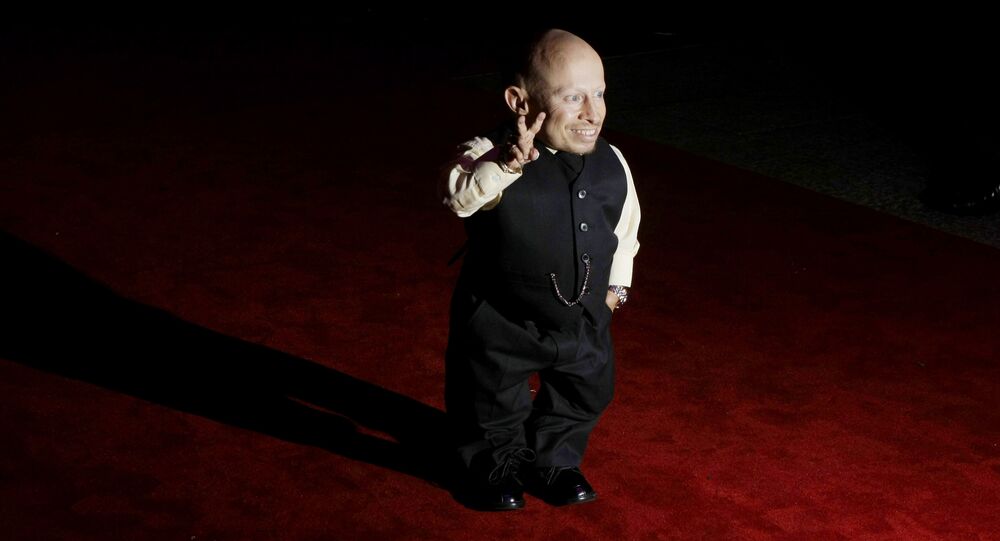 The actor, remembered as the mini-doppelganger of the main villain from Austin Powers’ franchise passed away on April 21. His representative didn’t give the cause of his death, but the family’s statement calls for being kind to each other, adding that “depression and suicide are very serious issues.”

Verne Troyer’s representative posted the sad news on social media, informing that the actor passed away on April 21.

“Verne was an extremely caring individual. He wanted to make everyone smile, be happy, and laugh. Anybody in need, he would help to any extent possible,” the statement reads.

The actor, who was 81 cm tall, became a pop-culture phenomenon after he played Mini-Me, a character from the Austin Powers films who was the diminutive cloned copy of the villain Dr. Evil. He also scored numerous and memorable appearances in TV series, reality shows, commercials and other movies, including the goblin Griphook from “Harry Potter and the Sorcerer’s Stone”, Percy in “The Imaginarium of Doctor Parnassus” and others.

Mike Myers, who partnered with Troyer not only in Austin Powers movies, but also in “The Love Guru”, was cited by The Guardian as saying “Verne was the consummate professional and a beacon of positivity for those of us who had the honor of working with him. It is a sad day, but I hope he is in a better place. He will be greatly missed.”

The cause of his death was not expressly given; however the family statement concludes with a call to donate to charity and a message for fans, “Depression and Suicide are very serious issues. You never know what kind of battle someone is going through inside. Be kind to one another. And always know, it’s never too late to reach out to someone for help.”

Troyer fought an addiction to alcohol in the past; he was admitted to a treatment center in 2017.

READ MORE: Dangerous Blues: WHO Warns That the World Slipping Into Depression

The social media networks, including Twitter, are awash with posts honoring the late actor, as users, including Verne’s fellow actors and actress, grieve over his death and thank the man “in small stature with big heart.”

“West Wing” Actress Marlee Matlin, who raised money with him for free aids for people with hearing problems, was among them.

So sad to read of the passing of Verne Troyer. A lovely smile with a caring and big heart, he helped raise money on behalf of @starkeycares for free hearing aids for deaf and hard of hearing people. RIP pic.twitter.com/pgA91tWPo6

​Others praised his kind heart and grieved that he had passed away too soon.

I am absolutely heartbroken.. Verne was truly a beautiful soul. So humble. Every time I got to work with him was truly a huge honor. I don’t even know what to say. He was a legend. Rest easy my friend. You will be missed by so many. pic.twitter.com/aOOzHTg95H

I worked with this amazing man on one of my YouTube sketches for my channel and he gave me 100% of his effort, was so easy going, talented, kind and just happy to be there. Not to mention a fellow Steelers fan. RIP Verne. This is the day that God called you home ❤️ pic.twitter.com/Ruiqyt9KLb

RIP Verne Troyer. Thank you for the laughs.

Very sad to hear the news of Verne’s (aka. Mini-me’s) passing. Had the pleasure of meeting him at the start of the year and he was the most fun loving and kind person. He will be missed😔#RIPVerneTroyer pic.twitter.com/3xDxBlUH55

You will be missed Verne Troyer. Rest easy my man. pic.twitter.com/0IAlBDpWfJ

He may have been small in stature but his heart was bigger than most. If we could all strive to be Verne Troyer, this world would be a kinder more caring place.

Another beautiful soul lost to depression. Verne Troyer, burdens are gone and now you can rest. After fighting so long now be at peace. #SickNotWeak

The struggle is real, and yes, depression kills. pic.twitter.com/xFajwjSPz2

'A Piece in the Jigsaw': New Theory Links Depression to Immune Disorders